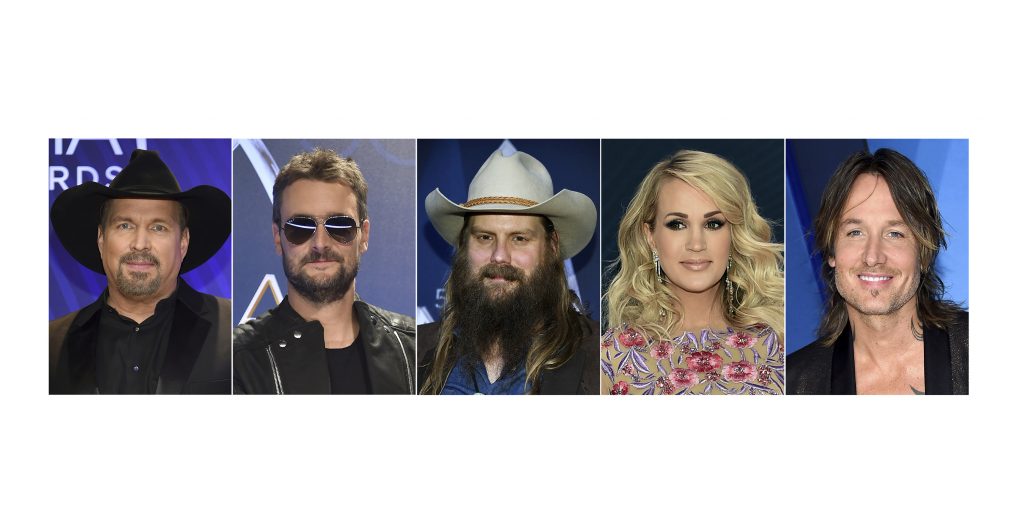 He said, she said: Will female acts win big at CMA Awards?

The lack of women on country radio is as tired as a bad country song cliche, but the Country Music Association Awards is trying to set the stage for them to reign, both as the hosts, as performers and perhaps the night’s biggest winners.

The show will air live Wednesday on ABC from the Bridgestone Arena in Nashville, Tennessee.

Entertainer of the year

MESFIN FEKADU: This category is stacked with so many heavy hitters that it makes it difficult to predict who will win the big honor. But my money’s on Carrie Underwood, who had an epic year and clearly deserves to be named entertainer of the year.

KRISTIN HALL: Seeing Carrie Underwood in concert this year, I was “Blown Away” by this “All-American Girl.” In my mind, she’s always “The Champion,” and if she doesn’t win this, “Somethin’ Bad” is about to happen in Nashville.

Album of the year

HALL: Carrie Underwood is the only one in this category that has consistently charted her albums at the top of the all-genre Billboard 200 chart and I feel she’s often underrated for her song choices. But I think voters are going to go with a perennial winner in this category, Eric Church. “Desperate Man” feels like a salve in a tumultuous and divided world.

FEKADU: I love that Carrie Underwood co-wrote and co-produced each song on “Cry Pretty,” the first time she’s done that on one of her albums. But I was surprised that the project didn’t earn any Grammy nominations earlier this year, marking the first time one of her albums didn’t get any Grammy love. I think Thomas Rhett and Maren Morris’ albums are too new to win here, which leaves me with Eric Church and Dan + Shay. And the hottest duo in country music should get the tequila shots ready because their third album is winning the prize.

Single of the year

FEKADU: “God’s Country” was one of the few country songs to reach the Top 20 on the pop charts and reminded folks that Blake Shelton isn’t just the funnyman on “The Voice,” he can still produce big hits. His rock-influenced anthem will win here.

HALL: Lil Nas X was robbed! The fact that “Old Town Road” wasn’t nominated in this category, despite being the biggest viral sensation of the year, smacks of exclusion. I’m not saying it deserved to win, though. OK, my rant is over. “Speechless” is gonna win here. Dan + Shay wrote the song about their wives and Thomas Rhett won this award in 2016 singing about his wife in “Die a Happy Man,” so maybe there’s a “my wife is the greatest” trend going. Who doesn’t love a love story?

Female vocalist of the year

HALL: Why do I have to choose? These same five women have been nominated in this category these last few years, but apparently voters can only read the names “Miranda” or “Carrie” on their ballots. Both Kacey Musgraves and Maren Morris deserve a win because they are putting out fascinating and compelling music that is reaching much larger audiences and winning Grammys. I think Morris will come out the winner as she’s the leading nominee, so she’s got a lot of fans rooting her on this year.

FEKADU: Yes, Kristin, you make some excellent points. However, I’m going to stick with voters only reading the names “Miranda” and “Carrie,” with the latter taking home this prize for the millionth time.

Male vocalist of the year

FEKADU: I feel the culture at these country awards shows is: You need to put in years and years and years of work before they will award you in major categories. If you look at the last year, there’s no way anyone but Luke Combs should take home this prize. In reality, Combs should even be an entertainer of the year nominee with all the success he’s had thanks to his streaming juggernaut of a debut album. But as I reflect on how these award shows work, I don’t think Combs will get this win this year. Chris Stapleton has won this honor the last four years and he’ll likely win again.

HALL: Mesfin, you’re looking at this all wrong. Luke Combs is Chris Stapleton 2.0! Yes, you’re right that there’s a reluctance to give major awards to new artists, but Stapleton broke out from being a well-known songwriter to an arena-selling artist by sweeping the CMAs on this very same stage in 2015. Combs is undeniably worthy of this award and he’ll be taking this one home.