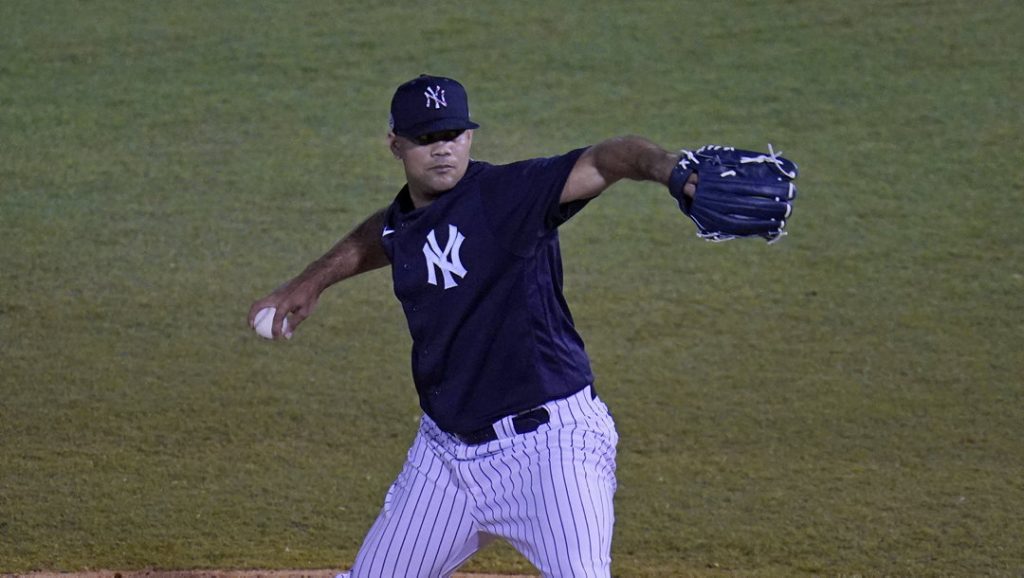 Lehigh Valley’s free extra-innings runner stole third base, then Charles Tilson got enough of a high fastball to poke it past Scranton/Wilkes-Barre’s draw-in infield.

That ground ball Wednesday pinned RailRiders closer Luis García with just his second loss of the season, this one of the hard-luck variety. For the most part, the big righty did his job, pumping a nasty two-seam fastball past Scott Kingery for a strikeout and the first out of the 12th inning. But Dalton Guthrie swiping third forced the RailRiders to change up their defense and helped turn Tilson’s grounder into a base hit.

More often than not this season, the veteran García has thrived while finishing off games for the RailRiders. He’s a perfect 11 for 11 in save opportunities, the most in the minor leagues heading into Saturday. No one else at Triple-A has more than eight.

“I’m just trying to pitch good and get out of there,” García said. “I’m not thinking about numbers. Just trying to get out there and help my team to win.

The bullpen is one of the reasons why the 30-13 RailRiders rank among the best teams in the minors this season. The group is a combined 26-4 with a 2.94 ERA. Many times, when it’s García’s turn to jog in to the mound, he’s following several sparkling innings of relief work, and it’s on him to get that effort to the finish.

“I think we have a great group of guys, and I’ve never have this much fun in my career,” said García, who at 34 is the oldest pitcher on the RailRiders. “We’re having fun.

“All the veteran guys and the young guys just get along so well. And we just like — nobody’s better than nobody here. So we’re just trying to pitch good and help each other.”

García has appeared in 17 games this season, most on the team. He’s allowed earned runs in just four of those outings and has a 3.86 ERA — though it’s down to 2.35 for the month of June. In 11⅓ innings worth of save situations, he’s walked two batters, struck out 14 and allowed nine hits, firing high-90s fastballs while getting guys to swing over his mix of splitters and sliders.

“He’s had a couple games where he scuffled. And again, nothing changed. He stayed the course, he’s doing his thing, a couple tweaks and he’s right back at it. Super consistent, you know exactly what you’re getting.”

Glant looks to García for more than just saves, however.

“We joke that he’s the assistant pitching coach,” Glant said.

García has years of experience under his belt. He began pitching professionally in 2006 when he broke in with the Los Angeles Dodgers organization. He headed to the Washington Nationals in a trade for infielder Ronnie Belliard, then the Philadelphia Phillies signed him in 2013. He made his big league debut that year and went on to pitch in 251 games over six solid seasons with the Phillies. They traded him to the Los Angeles Angels in December 2018, then he spent the shortened 2020 season with the Texas Rangers before joining the New York Yankees on a minor league deal.

“It’s a guy you’re going to want to hear. They’re gonna perk up. Because he’s not a — that’s the thing about Luis: He’s not a guy that talks all the time. He’s one of those guys that like when he talks, you listen, you know? Yeah, it’s been huge. It’s been huge for me. … There’s things I can talk to him about like, ‘Hey, can you maybe mention this to this guy?’ And it’s been great. He’s a huge help.”

Two of his pupils right now are starting pitchers Deivi García and Luis Gil. Last week, he posted a photo of the three of them with the caption, “Con mis hijos” (with my sons). Gil is 11 years his junior and he’s got Deivi García by 12 years.

“I think this year (I’m) having so much fun because I get the chance to help young guys, like Deivi, Luis Gil, Albert (Abreu), some of the other guys,” García said. “And it’s fun. I love to tell other guys. Maybe that’s why I’m having so much fun because, I don’t know, I’m doing good, but I’m doing good with the kids, too. You know, trying to get them where they’re supposed to be.”