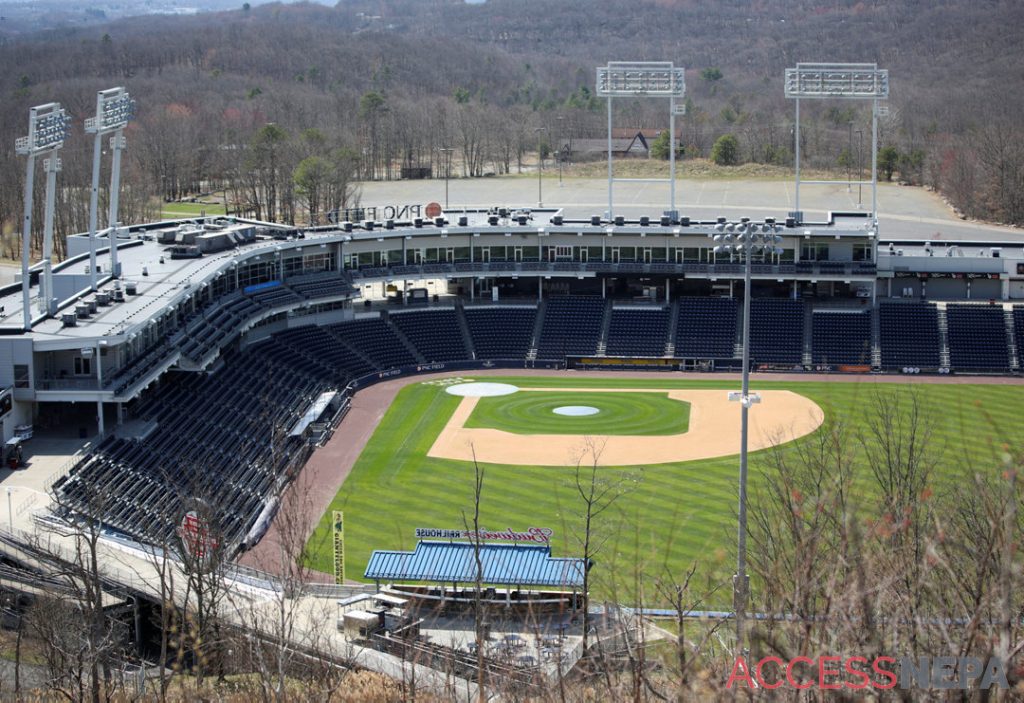 There’s just something about sitting in a ballpark when you’re a kid. You walk through the gates, and you’re overcome by the smell of the popcorn, the sound of spinning rawhide clashing with the barrel of an ash bat, the buzz of a ready crowd.

The bright lights shining down from a darkening sky might as well be from Hollywood. The turf, well, it couldn’t be any less emerald in hue than what Dorothy when she first took a gander at Oz on her trip down the Yellow Brick Road.

“Look out,” my grandfather yelled, just before that rawhide made contact with a plastic seat at Lackawanna County Stadium two rows back from where we were sitting on a Monday night in May 1990. “Have to pay attention when you’re sitting here.”

There are some things I’ll never forget about that moment, when the sights and sounds overtook my 13-year-old senses. The fact that it would be the last game we’d be at together is one. The reality that the ball comes at you fast when you’re a couple rows behind the dugout in a minor league stadium is another.

So is the fact that the man who ripped that ball past my skull was Juan Gonzalez. Didn’t know it then, but he’d become one of the most feared hitters in the 1990s.

I remember that as one of the first Triple-A games I ever attended, and while there have been hundreds, maybe thousands more since, there hasn’t been any one quite like that. The Phillies’ Triple-A team against the Oklahoma City 89ers, the Texas Rangers’ Triple-A team. An International League club against one from the American Association.

The partnership between the two leagues didn’t last much past that 1990 season, and for the last few decades, Scranton/Wilkes-Barre fans have gotten a steady diet of International League foes. It’s half the best prospects Triple-A baseball has to offer.

As of Friday afternoon, that system is history, too. Major League Baseball announced the details of its long-awaited Professional Development League, which essentially eliminates the old structure run by Minor League Baseball and brings in a new one largely driven by a focus on economics.

The RailRiders will be in the Triple-A East League’s Northeast Division, along with five other teams: Lehigh Valley, Buffalo, Rochester, Syracuse and the Red Sox’s new affiliate in Worcester, Massachusetts. Basically, that’s the old IL North. There are seven teams in each of the East’s other two divisions, the Southeast and Midwest. Three teams in each division weren’t prior members of the IL, and five major league teams that haven’t traditionally been part of the IL — the Brewers, Cardinals, Cubs, Marlins and Royals — now find themselves in the East.

Nobody knows for sure what all of this means, yet. But while MLB is certainly focused on the idea that reduced travel will save boatloads on travel expenses, it also needs to understand the value of keeping fans interested in a fresh product.

“I’ll preface this with, there’s there’s been no formal word,” RailRiders president John Adams said of the new league’s scheduling ramifications. “I would fully anticipate, for 2021, a very heavy Northeast division schedule.”

Which is fine, for now.

While Adams said the RailRiders are preparing to start the season in April, it seems most likely they’ll be waiting a month, at least, in hopes the pandemic simmers down a bit. Besides, if ever there was a summer where you could potentially (hopefully) sell the tranquility of a night at the park, watching a ball game from the box seats or a sunset from the lawn in right field, it’s this one.

To play consistent full seasons and stay in the Northeast Division for the long haul, the RailRiders would probably have to play each of those five opponents 28 times. That’s a lot of games against just a few teams. You’re not going to see something in April you can’t see in August. It’d be difficult to build excitement around the same-old, same-old, especially when you’re counting on big business from season-ticket packages.

The beauty of the new league is that it provides at least a possibility of expanding horizons and giving fans more for which to look forward. When asked about potential seeing teams from the Midwest and Southeast Divisions on the schedule, Adams predicted that ultimately would happen, even though it’s far from a certainty.

In 1990, the Red Barons hosted games against American Association foes like Oklahoma City, Nashville, Ohama and Iowa, giving local fans a glimpse of future stars like Gonzalez and Dean Palmer. They held two 10-day road trips, one in July and one in August, to repay the favor.

Play 20 games against each of the five teams inside the division, then the remaining 40 can be split for each team getting a different two or three opponents in the other two divisions. It would keep the majority of games within the division and the tighter geographic regions, reducing travel and cost. It would also provide enough variety in the schedule to keep it interesting, to expand the depth of prospects fans get to see.

It’s a way to grow the business and the game. During a time when baseball wants to “modernize” its development operation, it would also be a necessary nod to the past.