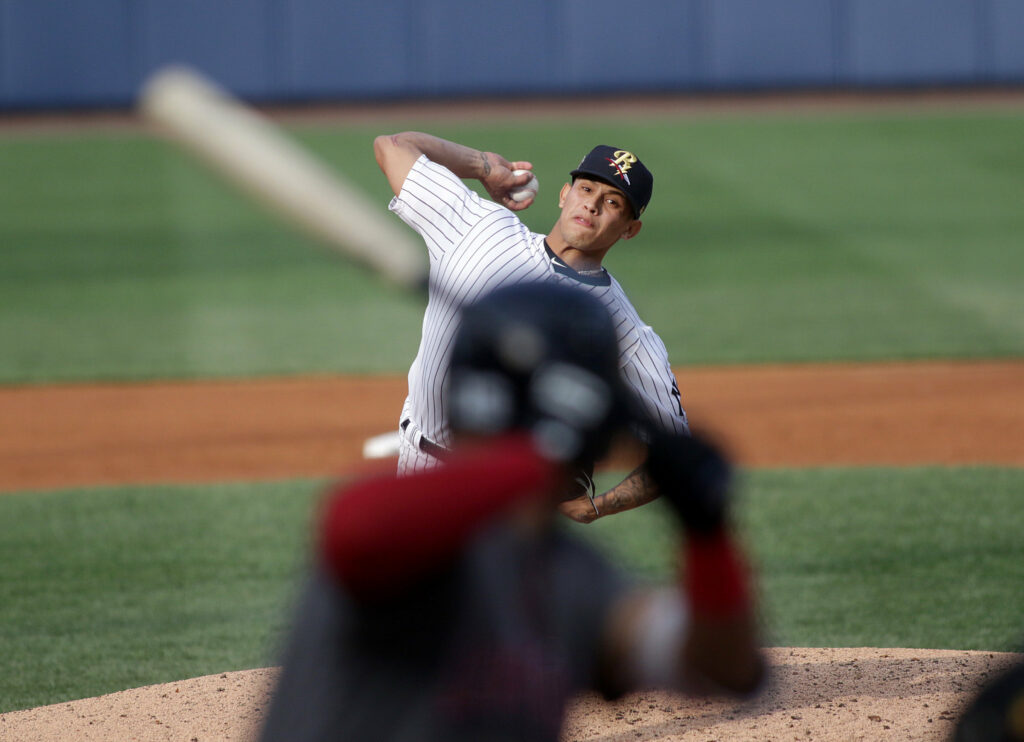 How Jonathan Loaisiga got back on track

Jonathan Loaisiga returns to the New York Yankees off a strong outing Friday with the RailRiders.

Loaisiga struck out four in three scoreless innings — he struck out the side in the first inning, then made it four of the first five batters in the second when he got Gwinnett catcher Alex Jackson swinging through a fastball — allowed one hit and walked none. He threw 48 pitches, with 33 going for strikes and 11 going for swinging strikes.

It was the third outing of the 24-year-old’s rehab assignment and second with SWB. He lasted just two-thirds of an inning in the first one, giving up three runs on a homer by Lehigh Valley’s Deivy Grullon (it was actually a pretty good pitch by Loaisiga), and he needed 32 pitches to get through it. In both games with the RailRiders, Loaisiga flashed his plus velocity. The first game was mostly 96s and 97s. The second game:

Not a strikeout, but a very good 1-2 breaking ball by Jonathan Loaisiga gets Christian Pache to pop out and end the second inning.

Six up, six down for Loaisiga. Four Ks. 30 pitches. pic.twitter.com/lDmhLnWnf9

Though he started both games with the RailRiders, Loaisiga pitched exclusively out of the stretch. He made a noticeable change in his mechanics for the second game, moving his hands from close to to his body and at the belt (left), to away from his body and up near his chest (right).

“It allows me to get my arm out front early so I can command the pitches the way I want to. It’s something that, obviously once it was brought up and I started incorporating and noticed a difference, I felt a lot better. Part of the reason why I was able to be productive and effective was probably because of that.”

Everything looked better in the second start: control, velocity and the sharpness of his curveball. It came against one of the best lineups in the International League, too.

Here’s a Q&A with RailRiders pitching coach Tommy Phelps about why they decided to change up Loaisiga’s mechanics:

Why did you guys make that decision? Well, he has a tendency to be late in his separation and it affects his timing. So I checked with Larry, asked what Larry thought. When he’s doing his throwing program and he’s not thinking about it, he always separates his hands right here, around his sternum area. Looking at it, it flows when he’s just playing catch. His separation’s a lot better. So when he goes out of the stretch and he’s down here, naturally when he goes down the mound he’s a little late and he brings his hands up there to separate and the timing’s just always different. So, it was just a thing to see where he naturally separated without thinking about it and just setting his hands in that area and going from there. That’s the key is just trying to find a way where he could separate and have more consistent timing.

What is it like when you guys make an adjustment like that and you see the results that you saw last time out? It was good. I mean, he was good. He threw some balls down in the zone. I still would like to see a little more consistent quality with his curveball, the depth-wise. Like the second one he threw of the game to the lefty (see video below), he struck him out, I mean that one had some good depth. And he started it lower, so it could finish. That’s the whole thing with him being on time. He still has a tendency to leave too many up, but that’s what our job is to try to figure out how to make guys have a little better timing, be more consistent. So, you’re just trying to find a way, whether it’s delivery-wise, whether it’s thought-wise, thought process — maybe it’s a certain pitch type to help him get back and find that timing and that rhythm, that feel. That’s what you’re always searching for. Trying to help everybody.

You did sort of a similar thing with Chad Green earlier in the season. Was it that same issues? Yeah, but Chad’s, we did raise his hands for timing wise as well, but his was more how he separated and timing of his front arm and everything. It’s something similar that he did in ’16. Just looking at old video when he was good, you try to compare what was it, what’s the history. I mean, yeah, I wouldn’t say everybody’s got to pitch with their hands higher. It’s just these couple instances have been that way. You’re trying to figure out what works best for that individual player. And you’re not always right. Believe me, I’ve failed so many times. I’ve failed a lot more than I’ve been successful, I’ll tell you that.