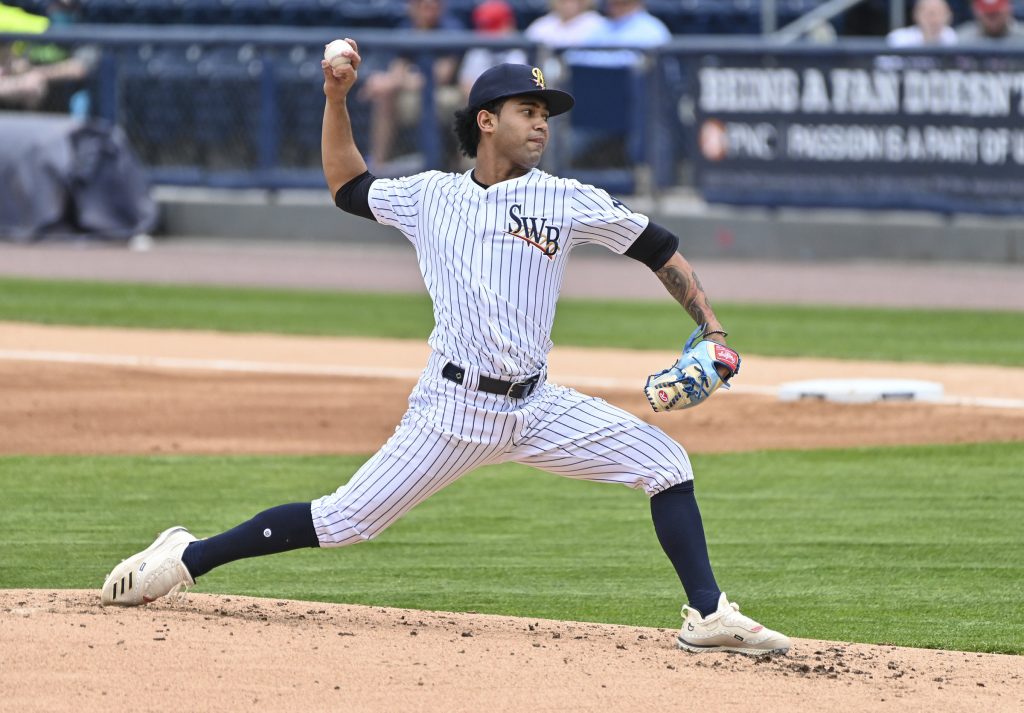 That guy walked seven of the 18 hitters he faced in Syracuse. That guy threw 42 percent of his pitches for strikes. That guy struck out just three, hit a batter and didn’t make it out of the fourth inning for the Scranton/Wilkes-Barre RailRiders.

For once, that guy wasn’t competitive.

“I was thinking a lot on that outing, because that was like another person right there,” said García, who allowed five runs in 3.1 innings that May 6 game, his first start of the season with the RailRiders. “I wasn’t competing like me. I just was throwing.”

It was out of character for García. His mound demeanor belies his age (he turned 22 on Wednesday), and it’s earned rave reviews from the likes of New York Yankees manager Aaron Boone, his catchers and his anyone who plays with him. His previous career high for walks in a game was five, done three times. The first, he was a just-turned 17-year-old, pitching in the Dominican Summer League in 2016. The other two came in 2019: once at Double-A where he also struck out 11 in four innings; and once with SWB against Gwinnett, where he pitched five hitless innings and struck out seven.

After the Syracuse outing, RailRiders pitching coach Dustin Glant quickly got on a call with pitching coordinator Sam Briend. They knew what was wrong and it wouldn’t take much to fix it.

“It’s not a major overhaul,” Glant said. “It’s the tiniest thing. And so that was the big difference was addressing that little mechanical tweak, to get him to feel it again.”

In short, Glant said, García is a really good mover, and sometimes that complicates things. A big part of his game is the counter rotation he gets in his windup, and that adds deception that can overpower hitters. But if that rotation gets to be a little too much, it can be difficult to get things back in line; difficult to repeat what’s supposed to happen. García’s been working so much on that, that Glant said he was overcorrecting against Syracuse.

“Obviously, he’s very upset with himself (that day), and very upset that he felt like he put the team, obviously, in a hole with his start,” Glant said. “And so that was he was really good about — I mean, we were at it the next day. Literally, we were throwing in Syracuse at one o’clock in the afternoon because he wanted to get it figured out immediately.”

Glant said it’s “a very small tweak” that they had to make, and it’s something that ultimately could work itself out once García gets a little older and adds some stability. The easiest way to explain it, he said, is if García is commanding his glove-side fastball (away to righty hitters and in on lefty hitters), that’s a good tell for him. That’s when he knows he’s synched up.

Deivi García warming up for his second start of this series against Lehigh Valley. pic.twitter.com/gGqLX1XesF

That next outing came against Lehigh Valley on May 11, the RailRiders’ home opener. Since he was pitching the first game of the series, he knew he’d face the IronPigs again five days later. That’s also after starting three alternate site games against the Philadelphia Phillies’ alt site squad (14.2 ip, 10 h, 1 r, 1 er, 6 bb, 11 k). Lehigh Valley hitters would be very familiar with him.

That didn’t seem to matter though. After those two starts, García earned Triple-A East Pitcher of the Week honors.

First time out: five scoreless innings, three hits, one walk and seven strikeouts. Of his 82 pitches, nearly 60 percent were strikes, and he got 13 swings and misses.

“It was more so like, ‘OK, that’s good. We’re back on track and now let’s repeat,'” Glant said. “Let’s kind of, you know, repeat last week’s process again, and keep moving this thing forward and tightening up, becoming even sharper.”

Next time out: five innings, two hits, one earned run (it was aided by García’s own errant pickoff attempt), one walk and nine strikeouts. He threw 86 pitches, and this time just more than 60 percent were strikes. He 12 swings and misses, and fooled Lehigh Valley enough to ring up 17 called strikes.

Deivi García with a fist pump as he blows a 3-2 fastball past Travis Jankowski for his third K in three innings. He’s retired 9 of 10 on 48 pitches. pic.twitter.com/5NrwwrT2je

“I think Deivi just continues to get better and better each outing he goes out there,” RailRiders manager Doug Davis said. “I think he’s confident in his stuff, I think in all of his pitches, to be honest with you. He’s using his slider a lot. He sneaks that fastball in there and in situations where they’re not expecting it so it plays, the velocity, plays up a little bit for him. And he locates it. He throws it at the top of the zone and then he locates it down at the knees. So everything I think has been very effective for him right now.”

Both starts were dominant, but in their own ways.

In the first, García brought his Good Fastball to the mound. Most of his putaway pitches were on that pitch, and it was clear they had a little extra giddy-up. He said his velocity in Syracuse was 90 or 92, but in that game, it was 94.

“I was attacking, I was using my breaking pitches pretty good, and finishing with my fastball. My fastball high is one of my best pitches.”

His secondary stuff took the spotlight in the second start. Curveballs and sliders early, then sliders and changeups later. Even though he got so many called strikes, eight of the nine strikeouts still came via swings and misses.

Six up, six down for Deivi García, who strikes out two in the second. He’s at 30 pitches. pic.twitter.com/xxaMJVPcb3

Deivi García strikes out two and walks one in the fourth. Six Ks today. Here’s one with a double hop from Deivi at the end. pic.twitter.com/RTghFtqACX

Because he reached Triple-A in 2019 and made his MLB debut in 2020, it can be easy to forget just how young García is. He’s sixth months older than Vanderbilt’s Kumar Rocker and 11 months older that Rocker’s co-ace Jack Leiter, who are widely expected to be among the top 5 picks in this summer’s draft.

“Can you imagine ‘Deivi García: Friday Night Starter?’ I mean, what would people do?” Glant said.

García talked about how much he’s changed since his breakout 2019 season, when he started the year at High A and finished at Triple-A. That guy relied on a dynamic, fall-off-the-table curveball to be his go-to secondary pitch. But by the time he reached the bigs in 2020, the curve wasn’t delivering the results he wanted. Hitters slugged .421 against the pitch, even though it graded out in the 71st percentile for spin rate.

“My curveball was the best (in the minors). My best pitch,” García said. “But in the big leagues, it was a little different. I don’t know why. I was surprised about that.”

So, he’s trying to evolve. The curveball is still a key part of his repertoire, but he’s learning when best to use it. It doesn’t just have to be a finishing pitch.

“The curveball’s just as much of a weapon, I would say, as it’s ever been,” Glant said. “He’s really been doing a good job the last two weeks, even in Syracuse, of stealing some strikes early in the count to both righties and lefties, which I don’t know how much he had been doing. I know that he’s thrown a couple righty-righty, like, 0-0, 1-0 behind-the-count curveballs for strikes that he’s been excited about.”

That might not be possible if not for the strides García has made with his other two pitches. By advanced metrics, his changeup graded as his best pitch during his MLB run in 2020. Briend told New York media this week that they worked to change the shape of his slider, adding more of a “sweepier” feel to it. He worked on them at the alt site, where the gameplans could be tailored for that week’s goal. For example, one start might’ve included a percentage of changeup usage that the team wanted to see him hit.

“I’m working a lot, in my first couple weeks, a lot of changeups,” García said. “A lot. I think that was my best pitch last year in the big leagues. That’s why I was using it a little more. Now, I’m working more on my slider. Both pitches — I think it’s really good.”

Beyond the mechanical stuff or the development with his pitches, García said he’s also enjoyed being able to dive more into the strategy of the game and how to better read hitters.

“Last year helped me a lot in my experience, like how I attack the hitters,” he said. “Now, I’m working a little bit on the different swings, like long swings and short swings. With two strikes, like 0-0, I’m learning about that. I’m working on that right now and that’s helping me a lot. When the Yankees called me to the big leagues, I (went) right there with some idea. Not like last year. Last year was a little more like ‘OK, go and just pitch.’ Now, I’m thinking a little more about hitters.”

He’s already been summoned to New York for one start, allowing two runs on three hits in four innings of a loss to the Baltimore Orioles on April 26. The Yankees will certainly call on him again, but with the starting rotation starting to click, he might have wait a little while.

As part of this, asked Deivi García how he feels about waiting for New York to call, and if he’s cool with being summoned for one start here or there. https://t.co/Ajl2ACxZHQ pic.twitter.com/rs4Nuni7vx