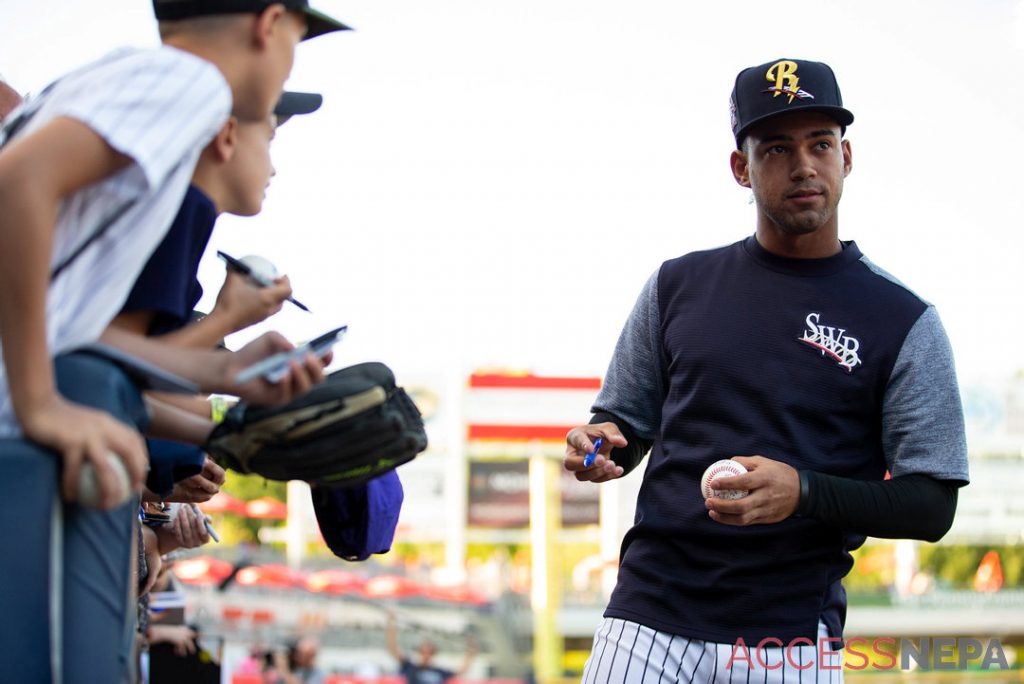 The New York Yankees protected seven prospects from this year’s Rule 5 Draft on Wednesday, and two RailRiders are among them.

Top pitching prospect Deivi Garcia and hard-throwing righty Nick Nelson were added to the 40-man roster Wednesday, a step closer to making their big league debuts. OF Estevan Florial, RHP Luis Gil, RHP Luis Medina, RHP Brooks Kriske and RHP Miguel Yajure were also added to the 40-man roster. To make room, LHP Nestor Cortes Jr. and 1B Greg Bird were designated for assignment and OF Jacoby Ellsbury was released with one year left on his mega-deal.

The 5-foot-9 righty boasts an impressive arsenal of pitches. When he was at Triple-A, his fastball sat comfortably in the 91-94 mph range, but he has the ability reach back and run it into the mid-90s whenever he wants to. It’s got a lot of spin to it and hitters are typically late on it. Garcia’s big curveball was his calling card heading into 2019, but that pitch might be taking a back seat to another. Garcia learned how to throw a slider, and with the RailRiders, it often looked like his best secondary pitch.

That was His 36th pitch of the inning. If he didn’t retire Pache, it likely would have been the end of his day. pic.twitter.com/t2KtdPJf8X

Deivi Garcia follows his lengthy first inning with a 1-2-3 second. Ends it by striking out John Ryan Murphy with a knee-buckler. Went 93, 94, 96, 94, 79 for his third strikeout of the day. pic.twitter.com/bWcdHY4eie

He struck out Cristian Pache in the first, and now Deivi Garcia gets Drew Waters on a 78-mph curve in the third.

Deivi only needs 13 pitches to get through the third inning. Retired seven in a row. pic.twitter.com/wsffC47kEh

Here’s Deivi Garcia vs. Luis Robert in the first inning. Garcia threw a couple of really close two-strike pitches — an 86-mph slider that just missed outside, and a 95-mph fastball just off the inside corner — before finally getting him on a slider. pic.twitter.com/f3RwKyK6Np

Nelson feels likes a throwback power pitcher, with a dominant fastball that lives in the mid-to-high 90s that he uses to gets swings and misses up in the zone.

“I know that command is always something that wasn’t quite there, and he’s totally gotten it this year,” fellow Yankees pitching prospect Mike King said of Nelson toward the end of the RailRiders season. “So, his stuff obviously plays and now that he’s overcome that little hump, he’s dominant.”

Nick Nelson ends a perfect first by blowing 95 mph past Richard Ureña. One groundout, one flyout, one strikeout for Nelson, who will go on paternity leave after today’s game. pic.twitter.com/tFXCCIroBS

Six up, six down for Nick Nelson, including this second-inning strikeout of Beau Taylor. 86 mph. pic.twitter.com/6B46NqVnxx

Might just be me, but is there something Clemens-y about Nick Nelson’s delivery? Something about the slight shoulder turn and when he leans back to come toward the plate.

This was his fourth strikeout, by the way. He has five in four inning. pic.twitter.com/oKtwHxfazL

Florial, 22 on Friday, had been a fixture atop Yankees top prospects list the last few seasons, but injuries limited him to just 84 games in 2018, then 74 games in 2019. As a result, he’s fallen out of Baseball America’s top 10 Yankees prospects and slipped to seventh in Baseball Prospectus’ rankings. Florial batted .237 with Tampa this year, with a .297 on-base percentage and a .383 slugging percentage — his worst offensive numbers since 2016, his second pro season. He did, however, end the season on a high note, posting a .796 OPS over 26 games in August.