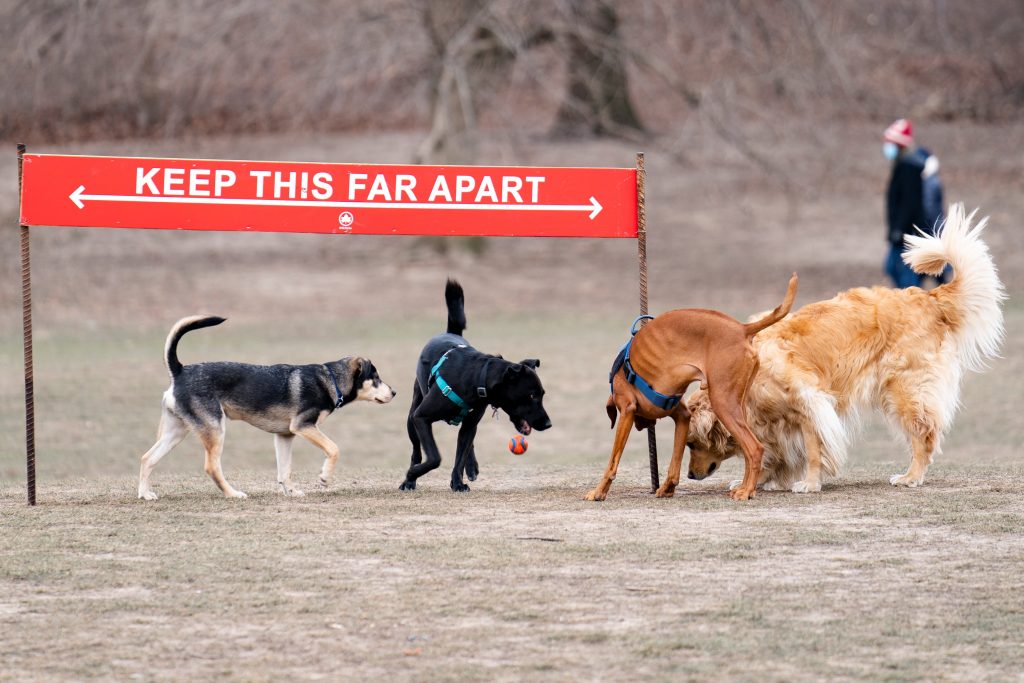 Like a lot of new dog owners, Adriana Magarin recently got a puppy to help brighten up pandemic life. “You can only read so many books, you can only listen to so many podcasts,” she said.

Buddy, her husky, is “a troublemaker, but he gets me up in the morning and gets me outside.”

But Buddy’s first trip to a dog park in Houston, where Magarin lives, was more than she bargained for. He was “doing great” hanging out with other dogs — until he followed them to a pond and fell in. He got out fine, she said, laughing, though he “looked like a little rat.”

Go to any dog park right now and you’ll likely find lively pandemic puppies like Buddy, along with new owners learning the ins and outs of off-leash play. Fortunately, with treats and a watchful eye, you can take the anxiety out of dog park visits in no time.

Stephanie Holmes admitted to being “a little nervous” on a recent day in Prospect Park in Brooklyn, New York. It was her very first time taking her 7-month-old dog, Stella, to the park’s early morning off-leash dog run, which these days attracts dozens of pandemic puppies.

Stella did just fine with all comers, human and canine, but Tom Huang, owner of Rose, a gray-and-white pit bull, sympathized about the dog park jitters. “It can be hard to get their attention if they’re in the mix,” he said.

Josslyn Shapiro had a strategy for getting her lab puppy Appa to listen: “If I bring chicken, he’s OK.” 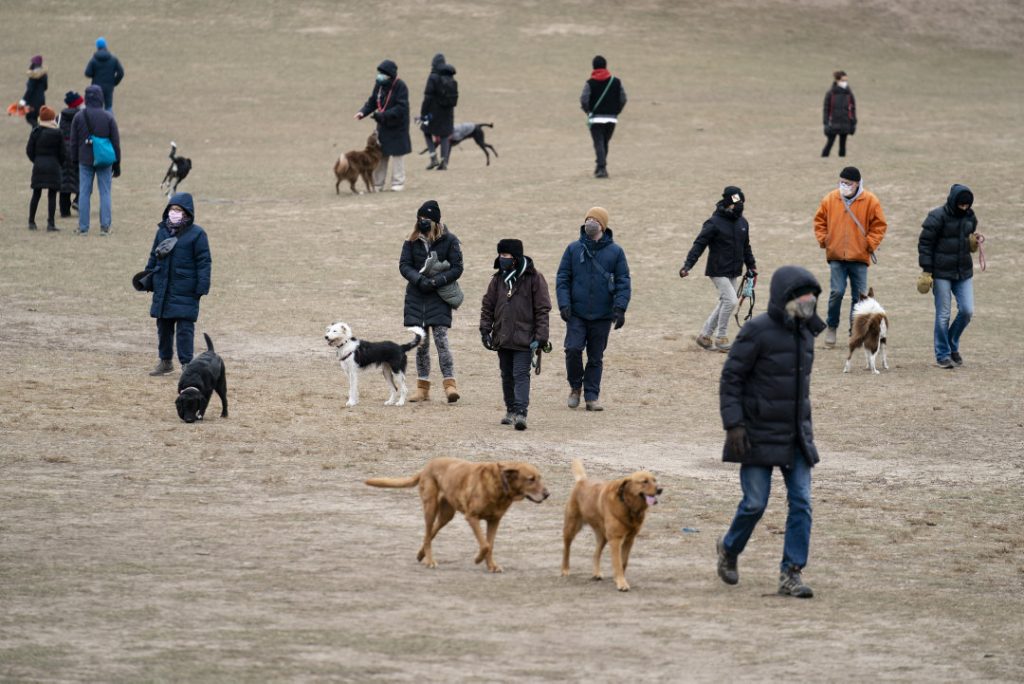 High-motivation treats like chicken are exactly what trainers recommend for teaching dogs to come when called. Darris Cooper, Petco’s national dog training manager, says a “smelly yet tasty treat” should be used “like a magnet.” Put it near your dog’s nose, walk away, then call the dog with a “repetitive noise,” like a whistle, smooch, or click, along with encouraging words like “Good boy!” or “Good girl!” When the dog comes, give the treat.

Practice rewarding your dog for coming when called several times a day, and “you should have a solid recall in about three weeks,” said Tim Steele, a certified dog trainer who runs the Behavior Matters Academy in Sacramento.

And make it fun: “Clap your hands, use happy talk, get on your knees,” he said. It’s also important to “slowly increase the level of difficulty by calling when they are mildly distracted.”

It’s normal for puppies to wrestle. But when is rough play too much?

If your pup is “cowering, lip-licking, hunched over with the tail tucked,” or, conversely, “overly stimulated” and unable to settle down, “it’s best to end the interaction,” advises Cooper.

You can also try a “consent test,” says Steele. If you think a dog is being too rough, gently pull the dog out and see whether the other dog moves away. If so, the aggressor “was indeed being a bit too rough and the other dog needed a break. But if the ‘victim’ dog follows, they’re saying, ‘Hey, wait — we were playing — I was fine!'”

Aggression is uncommon in most dogs, according to Cooper, but “if your dog lunges, snaps or bites another dog or person,” get help from a trainer with the right experience.

And to avoid problems in older dogs, Cooper says it helps to socialize puppies young, adding that they “do best playing in pairs.”

Sometimes owners fret when one dog mounts another, but experts say that’s normal dog play and not always sexual in nature. (In fact, dogs sometimes mount dogs of the same gender.) Of course, be careful if your dog isn’t spayed or neutered to avoid situations that could lead to unwanted pregnancies. 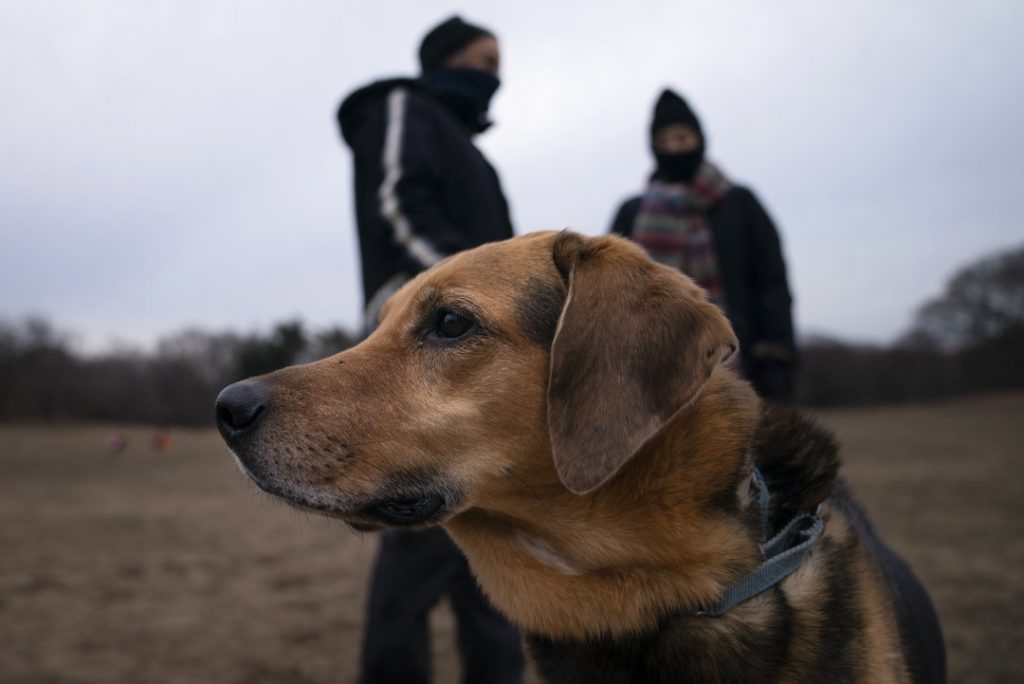 Bring me the ball

It’s fun playing fetch, but what happens if another dog takes your ball? One strategy, Steele says: Bring an extra ball, so you can keep playing while the other owner recovers your first ball.

Even better: “Toss balls for numerous dogs. The dogs will be happy and the other owners will likely be thrilled!” Alternatively, if another pooch is spoiling your game, put the ball away and try again later.

What the veterans say

Dog parks aren’t just places to tire out energetic puppies, says Matt Kelliher of Minneapolis, owner of a 5-year-old mutt named Beckett. He advises new owners to think of them as places for “actively training your dog to be respectful, to listen, and practice recall,” preferably with “a pocketful of treats.”

He’s also not a fan of small, fenced-in spaces: “Dogs need room to roam and scents to chase. I would recommend finding the biggest dog park you can.”

“It’s nice people are experiencing the joy of dog ownership,” he said. “It’s a good silver lining to the pandemic.”

Pets Q&A: Did mask keep cat from recognizing friendly neighbor?
Q and A: How owning pets can lead to a healthier lifestyle
Expert tips for welcoming a kitten
5 ways to give your furry friend a little extra love