It had been a somewhat quiet offseason for Penn State as far as the NCAA transfer portal was concerned.

That changed a bit on Monday, though.

Backup defensive tackle Damion Barber announced via his Twitter account that he will be entering the portal to pursue other opportunities in college football. 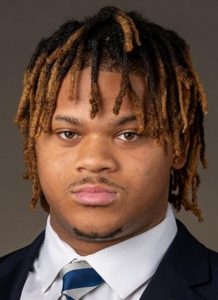 Barber was a backup last season, when he registered three tackles in eight games. And, it was looking like he was going to be a backup again in 2020. Defensive tackle has been a deep position at Penn State during the James Franklin years, and Barber seemed to have no better than an outside chance of unseating projected starters P.J. Mustipher and Antonio Shelton, or top backup Fred Hansard for that matter. Barber would have been in the mix for playing time with Judge Culpepper and Hakeem Beamon and Aeneas Hawkins, and there are a few really good young prospects like Joseph Appiah Darkwa and Dvon Ellies and, perhaps, even true freshman Cole Brevard, too. Read Barber’s statement, look at the competition, and it’s clear Barber saw the clearest path at consistent playing time might’ve been elsewhere.

Worth noting: Barber was the Penn State player named as a defendant in a federal lawsuit brought forward by former Nittany Lions safety Isaiah Humphries in January. In the suit, Humphries alleged he and several fellow underclassmen were targets of consistent hazing and harassment orchestrated by players, including Barber, as part of an initiation into the football program that effectively was condoned by the coaching staff. Penn State, Franklin and Barber all vehemently denied any wrongdoing and filed papers asking for the dismissal of the suit.