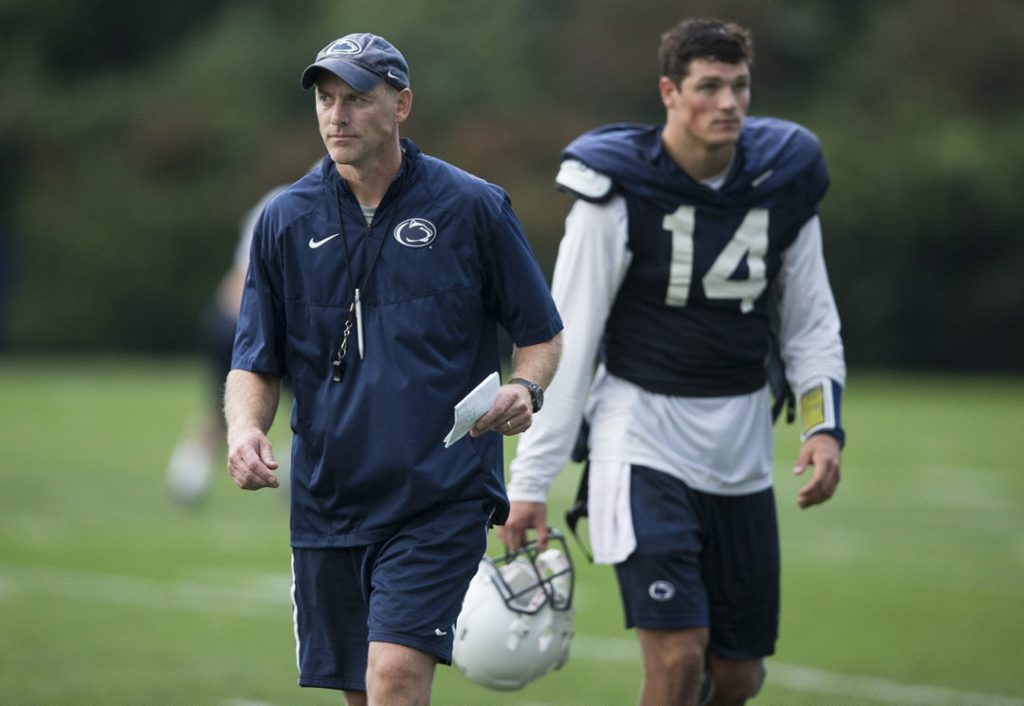 …it’s not the one you assume.

John Donovan, who ran Penn State’s offense in 2014 and 2015, the first two seasons of head coach James Franklin’s tenure, is back in major-college football, agreeing Friday to become the offensive coordinator at the University of Washington.

Donovan spent the last four seasons as an offensive assistant with the Jacksonville Jaguars since being fired by Penn State in November of 2015. He worked with tight ends, running backs and quarterbacks, and he’ll coach quarterbacks at Washington, as well.

“Coach Donovan has a great deal of experience at both the college and NFL levels, learning from a lot of great offensive minds about coaching the kind of aggressive, pro-style offense we want to play here at Washington,” new Huskies head coach Jimmy Lake said in a statement released by Washington. “From my own experience, I know how much a coach can learn and grow by spending significant time in the NFL. I’m excited for him to get to Seattle and get started.”

The Penn State fan reaction to this is going to be one of two things: A confused headscratch, or an outright guffaw.

The Nittany Lions were no bueno offensively under Donovan, even with a true freshman running back named Saquon Barkley in 2015. Penn State ranked 113th in the nation, which is not good, in points per game in 2014 (20.6) and they followed that up by ranking in the 100s in more than a half dozen other key statistics the following season.

Judge those numbers, and combine them with the fact that Donovan has never coached further west than Georgia Tech in a coaching career going on 23 years, and you have a curious hire, for sure.

My take on the whole thing, and I know it’s going to be unpopular: I don’t think two seasons struggling at Penn State — or anywhere else, for that matter — is completely indicative of what kind of coach you are. Donovan came to Happy Valley with a system that was pretty effective in the SEC (you can argue his offenses were the best in Vanderbilt history), but when he arrived in central Pennsylvania, he had a beloved starting quarterback with two seasons of eligibility left who was far from a cozy fit in that system. He had a brutal offensive line, Saquon before he was Saquon, and Chris Godwin before he was Chris Godwin, Mike Gesicki before…

You get the picture.

I get it…”But if he was so good he’d have developed those guys quicker, like Joe Moorhead did?” And, my response to that is going to be unsatisfactory to some fans: That was a strange time in Penn State’s history. Its future stars were learning, and there’s a big difference between being a second- or third-year player in a college program than a true freshman. That’s why every program in the nation would like to have Micah Parsons right now; players who can make that immediate of an impact are precious.

With time, with some players that fit his system a bit better, maybe Donovan is a lot more successful at Penn State than those numbers looked.

All that said, if you want to argue about the moment things changed for Penn State under Franklin, pushing itself at least to the cusp of being a national championship contender, you can probably argue the Marcus Allen blocked field goal against Ohio State in 2016, or the Barkley overtime run against Minnesota (or Irv Charles catch, if you want). But the John Donovan firing that led to the Moorhead hiring and the change in offensive philosophy has to be pretty high on the list.

It was a necessary separation, but one I didn’t necessarily think at the time should be Donovan’s last crack at a job like this.

“I couldn’t be more excited to be a part of such a great university, with unbelievable football tradition, like the University of Washington,” Donovan said in the statement. “Thanks to Coach Lake and everyone involved for this opportunity, and I’m looking forward to getting started. Go Dawgs!”