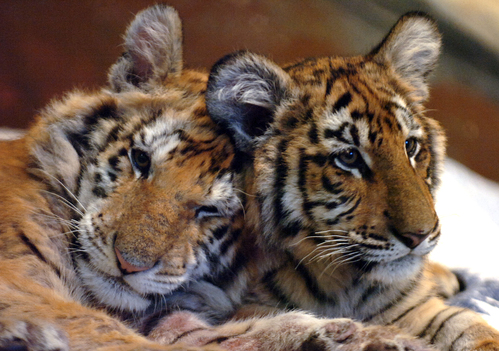 Everyone in the country seems to be talking about the new Netflix’s documentary “Tiger King.” The limited series deals with big cat enthusiast Joe Exotic and his blood feud with Carole Baskin, another big cat enthusiast.

There always seems to be some connection to Scranton (even in a small way) in bigger stories. Well, once again, Scranton has a connection — actually two — to Joe Exotic. Their names are Ivan and Alea, and they’re a pair of endangered Indochinese tigers. 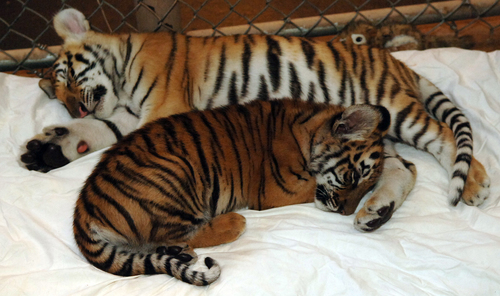 ACCESS NEPA FILE
The two tiger cubs at the Genesis Wildlife Sanctuary relax after eating on Friday, July 25, 2008. The female is in the front, and the male in the back.

On July 25, 2008, Ivan and Alea were presented to the people of Scranton after taking up residence in their new home at the Genesis Wildlife Center in Nay Aug Park.

According to a July 22, 2008, article in The Times-Tribune, the cubs were donated to Genesis by G.W. Exotic Animal Park, a conservancy and educational zoo in Wynnewood, Oklahoma, operated by Joe Schreibvogel, better known as Joe Exotic. 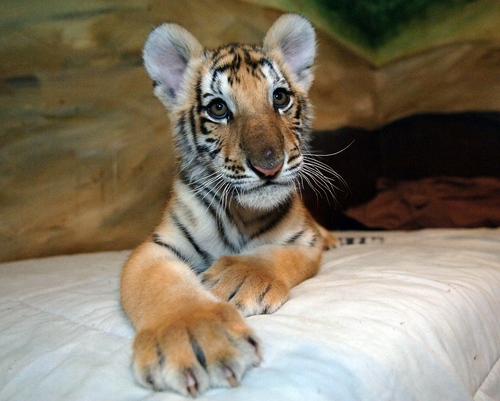 The operator of Genesis Wildlife Center, Margaret Miller, said in the same article that she was drove the cubs from G.W. Exotic Animal Park to Scranton, a trip of more than 1,500 miles.

Schreibvogel also said that he had been working with Miller for two months on getting the tigers to Genesis and that someone from his park would check annually on the cubs once they arrived in Scranton. 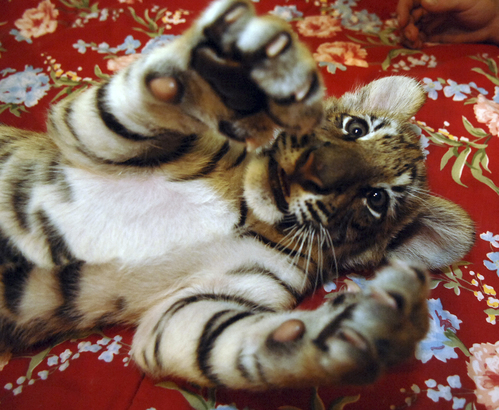 ACCESS NEPA FILE
A female tiger cub plays with a staff member at the Genesis Wildlife Sanctuary on Friday, July 25, 2008.

Genesis opened in a portion of the former Nay Aug Park Zoo in late 2003. From that point, operator Margaret Miller started filling the former zoo with animals from her and husband’s, veterinarian Tom Miller, animal rescue facility in the Poconos.

The idea to return animals to Nay Aug Park was developed during Mayor Chris Doherty’s administration. Doherty, who was working on agreement with the Millers in 2003, said the city would provide food for the animals and reach out to businesses in the city about becoming corporate sponsors at the new animal attraction.

The original Nay Aug Park Zoo closed in 1988 after many years of decline. 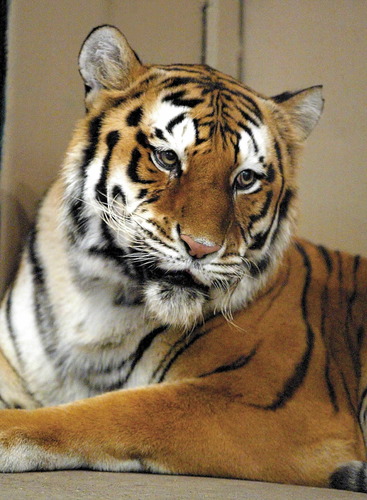 One of the first new residents of Genesis Wildlife Center was Reba, a Siberian tiger. Miller told The Times-Tribune in May 2008 that Reba was rescued from a small zoo in Marshall Creek in 1993. Reba was an instant hit at the facility but sadly died on May 6, 2008, at the age of 15.

On April 8, 2009,  Mayor Chris Doherty announced that the city, which had been giving Genesis $50,000 a year in support, may not be able to continue that assistance.

His announcement came after The Times-Tribune wrote a series of articles dealing with conditions at Genesis. One of the articles detailed how, in 2006, G.W. Exotic Animal Park had its license pulled for two weeks followed by 18 months of probation for numerous violations of the Animal Welfare Act.

Days later, on April 14, a deal was hammered out in an hour-long hearing before Lackawanna County Judge Carmen Minora for the closure of Genesis Wildlife Center.

In the deal, the 50 animals living at Genesis, including Ivan and Alea, would be transferred to the Millers’ Monroe County facility. The transfer of the animals would be conducted under the eye of Miller’s husband, Tom, and veterinarian Andrew Church.

In May 2009, it was decided that animals would not be relocated to Millers’ sanctuary. Instead, it was agreed upon in court that the animals from the park would be relocated to T&D’s Cats of the World in Penns Creek in Snyder County and Heaven’s Corner Zoo in West Alexandria, Ohio.

“About 18 of the animals — including two tiger cubs, a bearcat, a cougar, a fennec fox, several monkeys and two fruit bats — have been transferred to T&D’s Cats of the World in Penns Creek, Snyder County, according to information at a court hearing Friday,” the article explained. “Two genet cats,  three capuchin monkeys and 14 other animals were taken to Heaven’s Corner Zoo in West Alexandria, Ohio.”

An article from the Journal News of Hamilton, Ohio, explained that on Jan. 31, 2015, the U.S. Department of Agriculture removed several large cats from the zoo. Heaven’s Corner closed soon after, according to another Journal News article from 2015.

Heaven’s Corner and many other similar facilities in Ohio were forced to close following the passage and enforcement of the Ohio Dangerous Wild Animal Act.

Today, the public can visit T&D and catch photos of Ivan and Alea on the site’s Facebook page.

You can learn more about other large cats that once called Nay Aug Park home by giving a listen to Historically Hip, our local history podcast: https://accessnepa.com/pages-from-the-past/historically-hip-lions-of-scranton/