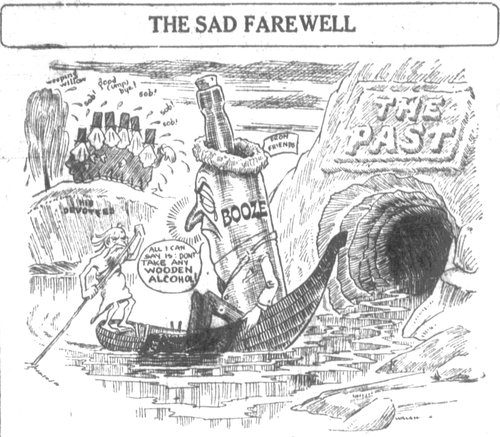 Welcome to a new video feature here on AccessNEPA that will deal with stories from the Stacks of the Times-Tribune Library.

Today’s episode deals with what went on in Scranton went prohibition went it effect on Jan. 17, 1920. 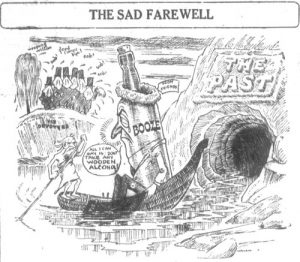 At the stroke of midnight on Jan. 16, 1920 the 18th Amendment went into effect across the United States. The amendment called for the prohibition of the manufacture, sale, transportation, import/export of intoxicating liquors in the United States. The amendment was passed Jan. 16, 1919.
With the new law going to effect, Scrantonians would say goodbye to numerous gathering places, such as the bar and grill at the Hotel Casey, the bar at the Hotel Belmont and Hotel Jermyn. The hotel’s owners had yet to say what would go in place of the bars, but a barbershop and shoe repair shop were rumored to be moving into the Jermyn and Belmont.
Some bars already announced how they would change. Lohmann’s would become a restaurant, the Oak Cafe on Adams Avenue would become a businessmen’s lunchroom and the Rathskeller on Spruce Street and the Valley House on Lackawanna Avenue would serve ice cream and soft drinks.
The owners of the Arrow on Spruce Street, Carroll’s on North Washington and St. Cloud on Wyoming Avenue closed up shop before the midnight deadline. Carroll’s and St. Cloud were going to reopen as automobile showrooms.
While some residents were upset about the new law, others were celebrating. Supporters of prohibition held a large gathering at Town Hall in Scranton. Speaking at the event was the Rev. J.J. Curran of Wilkes-Barre and founder of the Catholic Prohibition Movement; attorney Walter Schanz, David Davis, the Rev. W.L. Sawtelle and Dr. George Eckman.
In a fitting farewell, the Water Street Bridge was the scene for a “burial at sea” for good ’ole John Barleycorn. The funeral started at the Wyoming Valley House, where folks paid their respects to a casket filled with empty whiskey bottles.
At midnight when prohibition went into effect, six men serving as pallbearers were to place the casket on their shoulders and walk to the Water Street Bridge. At the bridge, they would drop the casket into the Susquehanna River. 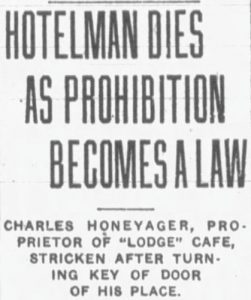 Charles Honeyager locked up the Lodge for the last time the night of Jan. 16.
Honeyager, 49, died after he closed up the Lackawanna Avenue cafe shortly after midnight, when Prohibition went into effect.
According to his sister-in-law, Bea Feeley, who was sitting in the cafe’s office, Honeyager was walking into the office when he fell. She grabbed him and placed him in a chair. She ran upstairs to his apartment to summon the family’s nurse, who was tending to Honeyager’s ill wife, Catherine. The nurse called the doctor. By the time the doctor arrived, Honeyager had died.
Despite Prohibition becoming the law of the land, Honeyager was not going to let the law shutter his business.
James Preziosa said that Honeyager told Frank Hughes, the former owner of the Lodge, the evening of Jan. 16 that he would “open up in the morning and observe the law to the very letter. I’ll see you at noon, Frank.” Preziosa and Hughes were both in the cafe before closing.
Honeyager was survived by his wife and two sisters, Mrs. Edward Sunday and Mrs. Fred Schwenk.
Before operating the Lodge, Honeyager was a conductor for the Scranton Railway Co.