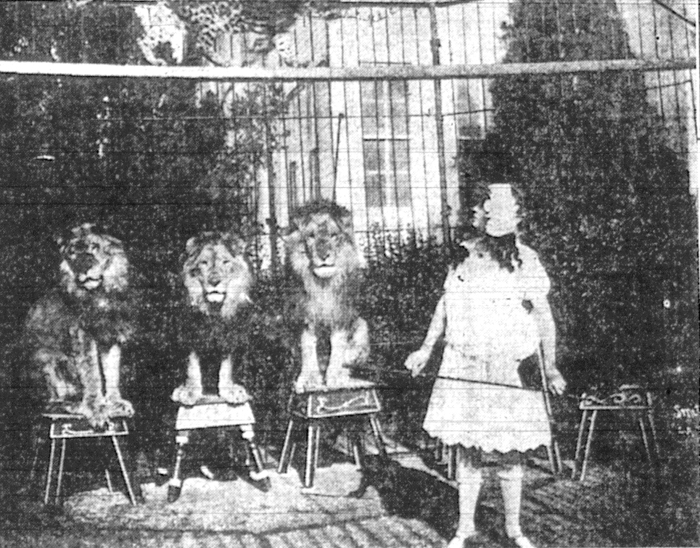 Yesterday you may of noticed an interesting entry in the “On this date in NEPA” on page A2. The entry for 100 years ago mentioned that a lion escaped from its cage at the Lackawanna Station in Scranton. This story was so wild,  I thought I should share the entire article with you.

Lion Escapes From Its Cage at Depot

Creates much excitement at Lackawanna Station until Mme. Evelyn appears.

Those who happened about the Lackawanna depot yesterday afternoon witnessed a bit of excitement that for the moment when one of the lions belonging to a vaudeville act got loose and for nearly twenty minutes kept a black porter at bay.

Shortly after 3 o’clock several larges of wild animals including lions, panthers, tigers and bears were unloaded from the train are were placed in the baggage room awaiting arrival of the transfer wagons. The animals were in charge of a keeper, who stepped out for a hurried lunch. Before going he asked one of the porters, a man named Fred Brown, to keep watch. Brown earlier in the day had sought employment from the manager of the act, alleging that he had had some experience with wild animal shows in the past.

Promotional photo that ran in the Scranton Times on Dec 18, 1915 of Miss Evelyn and her lions.

When the keeper was fairly out of sight, Brown’s curiosity got the better of him and he sauntered over toward the cage containing “Silver Tail”, a lion that has been known for years as being one of the most treacherous in captivity. In some manner, the bolt on the cage became unfastened, and the beast with a spring pushed against the door. Brown saw it just in time and dodged down behind a trunk. He could hear the frantic pawing of the lion, as the huge claws scraped against the iron bars. In another second a monster hairy form shot over his over his head, with a roar that could be heard for the two blocks, the lion plunged and tore around the room. Brown thought he had one change for his life and he took it by springing up over the trunks and into the steel cage, pulling the door behind just as the brute made a leap toward the scared porter. For the time being at least he was safe and Brown though for a moment as he wiped the cold perspiration from his forehead. Someone might come in at any time, and then horrors of it all a cold shiver ran over his body. Brown did the only thing that he could think of, he yelled.

“Don’t come in here, lion loose, get the trainer.” he shouted frantically, and he up his yells, which added to the roaring of the maddened lion, caused one of the newsboys on the outside to listen. The youngster climbed up to a little window on the street side of the baggage room, took a quick glance within and with rare presence of mind, rushed over to the outer door of the baggage room and snapped the padlock. Then he rushed into the station master’s office and excitedly explain what had happened, and then made a beeline for Officer Thompson, who was on traffic duty a few hundred feet away.

By this time the crowd had collected, a dozen voices at once suggested what should be done, but no one stepped forward to make the initial move. Thompson hurried along and after a survey of the situation from a safe vantage point through the window, yelled to Brown to stay where he was.

“Get the keeper,” suggested someone, but none knew just where he had gone except Brown and nobody in the crowd dared get close enough to ask the frightened porter.

By this times, pandemonium reigned in the baggage room, the roars of the lion brought forth angry snarls from the other animals and Brown lay crouched in the corner of the steel powerless to do anything but tremble and hope for delivery.

When things were at a standstill and the officer was considering the suggestion that the animal be shot, a young lady happened along and made straightway for the baggage room door, not heeding the shouts of warning that came from the crowd.

“Look out, a lion’s loose in there,” some yelled. Then it dawned upon her just what had happened.

“I am Mme. Evelyn,” she said quietly, “those animals belong to me. Someone get the key to this door please.” She slipped in quickly and banged the door behind her. Without whip, club or weapon, she stood within the room.

The lion saw her, she spoke, the brute stopped short, and stood passive. “Get out of that cage quickly,” she called to Brown, “and go behind a trunk.”

Brown hesitated a moment and Mme. Evelyn ordered him to do as she bid. The porter slid out and left the cage door open. In less than a minute Silver Tail was back where he belonged. The bar was shoved in place and the excitement was over.

Several hundred interested spectators gathered about and watched the huge crates and cages of wild animals being loaded on the transfer wagons bound for Poli’s, where Miss Evelyn is to be one of the headline features for the first three days of this week.