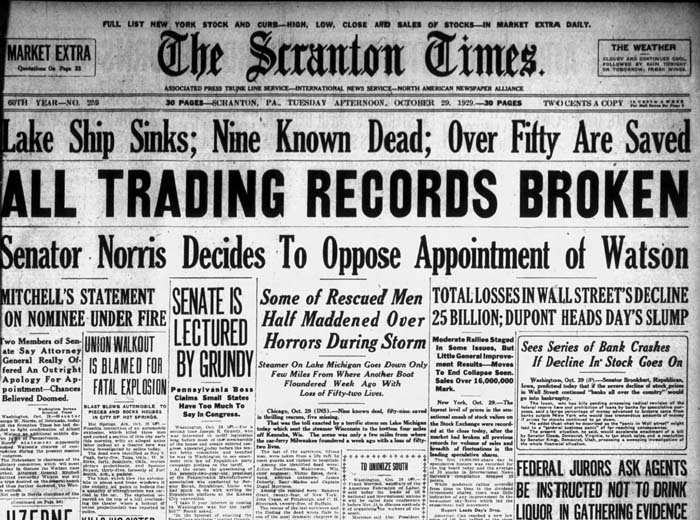 90 years ago, starting on Oct. 24, the financial markets in the United States took a dive of a steep cliff that resulted in billions of dollars lost in the markets. Those loses along with other factors lead to our country’s Great Depression that lasted some 10 years.

Over the past 6 days, I wrote about the ups and downs of the firsts day of the financial decline in my daily local history feature “Day In History.”

Here are those stories – 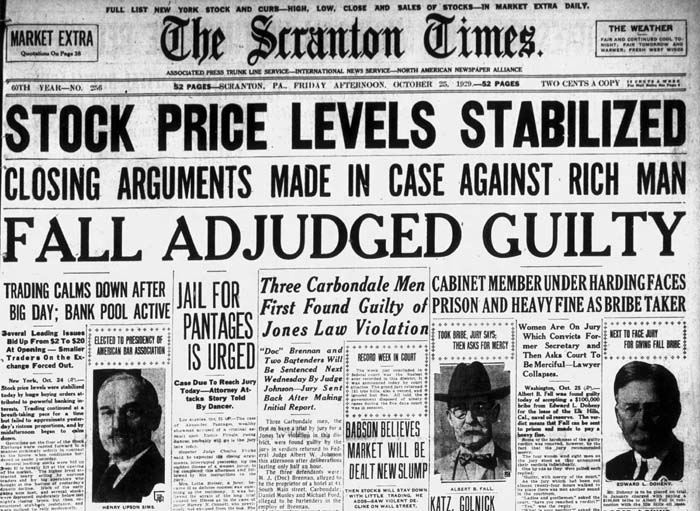 After the frantic selling of 12.9 million shares the previous day on the New York Stock Exchange, stock prices seemed to stabilize because of massive purchases by large banks. The Oct. 25 sale on the market was 6.4 million shares.

A group of large banks, including J.P. Morgan & Co., Bankers Trust and National City Bank, met to discuss ways they could prevent a collapse of the market. The banks agreed their assistance to the market would be to prevent a collapse, not to gain profit.

To maintain order in and around the Stock Exchange, New York City police stationed more than 100 police officers and detectives in the Wall Street area. Police Commissioner Grover Whalen felt an increase in police presence was warranted because of the possibility of thieves trying to steal bonds and securities being delivered between offices. 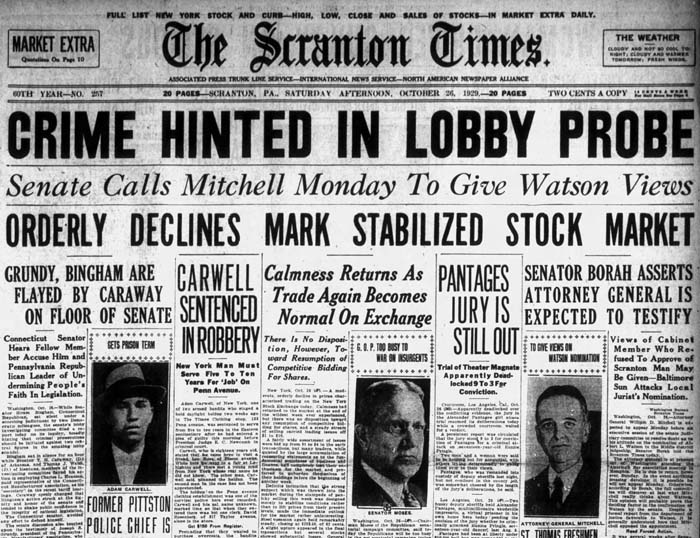 After two dark days on the financial markets, prices on the New York Stock Exchange went down again but calmness seemed to return to the trading floor.

Other stocks were still being sold off, such as Westinghouse, Eastman Kodak and Allied Chemicals.

President Herbert Hoover issued a message about the massive stock market drop. He said “the fundamental business of the country — that is, the production and distribution of commodities — is on a sound and prosperous basis. The best evidence is that although production and consumption are at high levels, the average prices of commodities as a whole have not increased.” 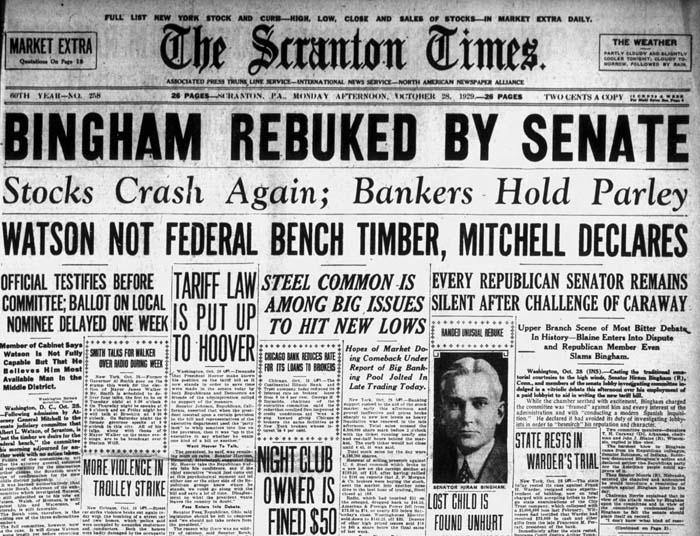 The stock market went for another wild ride, this one caused by selling of U.S. Steel shares. As the stock price was falling, traders learned that J.P. Morgan & Co. was buying, which led to a rally. But as the day went on, the price fell again, ending down at $186 a share. Other stocks following the up-and-down trend were Radio Corporation of America, down $46.50, and Westinghouse, down $35 to end the day at $145.25.

“The present crisis in the stock market squeezes out inflation caused by over-speculation,” a spokesperson for Sun Life Insurance of Canada said. “And we have taken opportunity largely to increase our holdings, and we are still buying.” Sun Life was one of the largest holders of American Telephone and Telegraph common stock. At the end of the trading day, AT&T was at $233 a share, down $34.

Twenty five billion. That was the total amount of paper losses at the New York Stock Exchange since the beginning of the decline Oct. 24.

Despite the report of the massive amount of losses, the market actually hit a milestone on this day. It was the first day the exchange saw 16 million shares sold.

With that amount of shares being sold, there were moderate rallies with AT&T, Westinghouse and RCA, but by the end of the day some stocks experienced losses. DuPont ended the day down 70 points at $80 a share.

The exchange’s board of governors was considering closing the market Nov. 4. Several of the large commission houses urged the closing so their employees could use Nov. 4 and 5 to catch up on all the paperwork that had accumulated since Oct. 24. The market was closed Nov. 5 for Election Day. 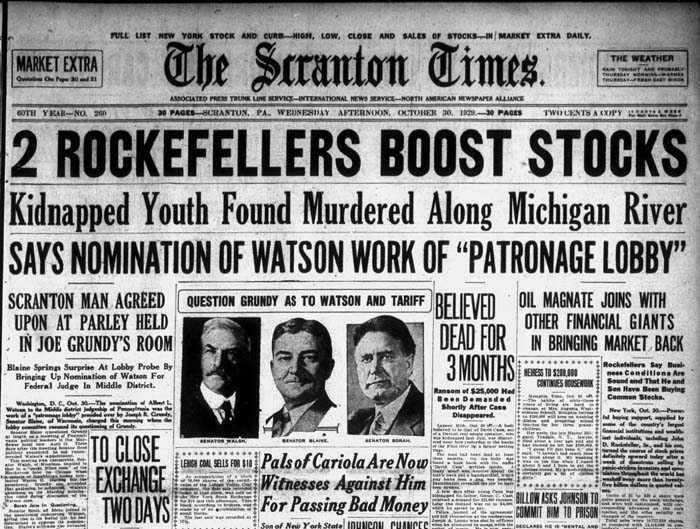 John D. Rockefeller Sr. and his son, John, released a statement on the situation taking place on the New York Stock Exchange.

Rockefeller Sr. said “believing that fundamental conditions of the country are sound and that there is nothing in business situation to warrant the destruction of values that has taken place on the exchange during the past week, my son and I have some sound common stock. We are continuing and will continue our purchases in substantial amounts at levels which we believe represent sound investment values.”

The market had a good day, with most stocks seeing a $5 to $30 increase. A total of 10.7 million shares were sold. 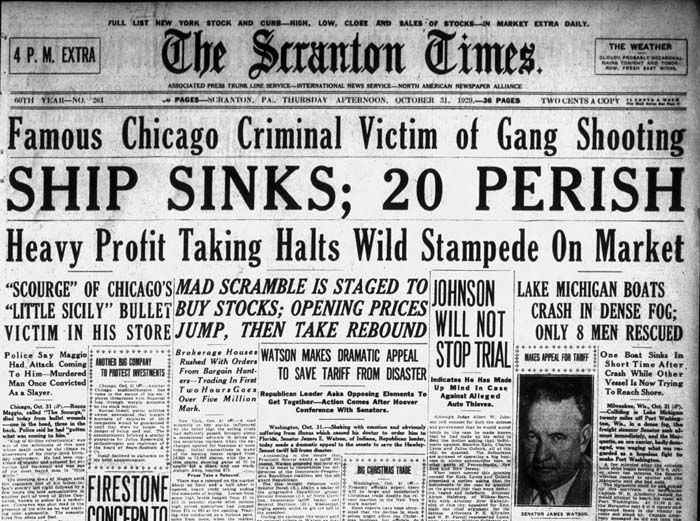 A wild day on Wall Street

It was a wild day on Wall Street thanks to bargain hunters and a feeling among the traders the crisis had passed.
The day started down but those losses soon turned into gains, with some stock prices jumping in between $5 and $25.
Some of the biggest gains were seen with utility and oil stocks. Gulf Oil started out the day at $22, but by the end of trading the stock finished at $164. Standard Power and Light saw an increase of 83 points to end the day at $160, and Electric Bond and Share was at $20 and ended the day at $99.87.
Market watchers believed the statement by the Rockefellers, followed by a large amount of overnight stock orders, may have “checked the wave of hysterical selling.”

When the trading resumed on Nov. 4, stocks were down again. Some as much as $20 a share. The market was closed on Nov. 5 for Election Day but when trading again resumed on Nov. 6 for only three hours, stock prices were down again especially with the large banks seeing declines.  On Nov. 7, the market crashed after the morning bell but when the bell rang in the afternoon the market had rallied correcting the morning’s decline.