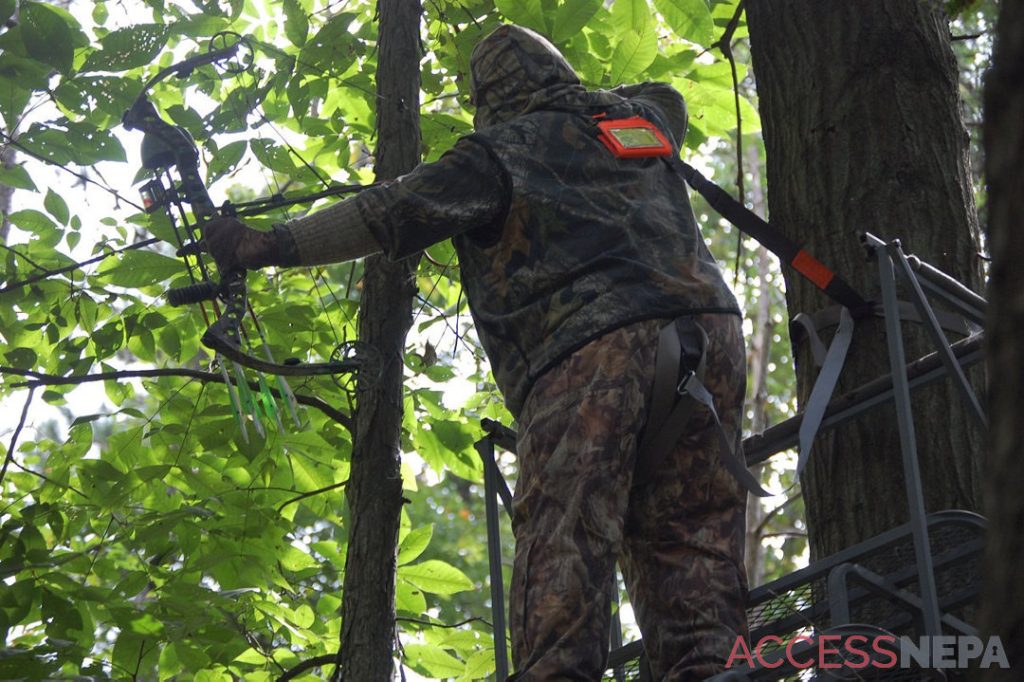 No matter how many trips deer hunters make, there should be no falls

MILFORD, New York — When clients book a deer hunt at Leatherstocking Guide Service with outfitter/guide Bob Partridge, there is one rule they must follow, and it can save their lives.

It has everything to do with obeying the single most important safety rule for those hunting out of a tree stand.

“We put in hours of scouting before the season to make sure our ladder or hang-on tree stand locations in what we believe are the most productive locations,” Partridge said. “There are always some hunters who are more confident in bringing their own stand, and are welcome to do so.

“A climbing or ladder stand can be very helpful, especially during the archery seasons, but there is one rule all our hunters must follow no matter if hunting out of our stands or their stands and no matter the season. We require that our hunters bring and always use a safety harness whenever they hunt from an elevated stand.”

And so it goes.

When paying for a hunt, hunters are willing to follow the rules of the road. Unfortunately, some of those hunters throw caution — to say nothing of common sense and safety — when leaving to hunt their favorite local spot.

A few years ago, the Pennsylvania Game Commission board of game commissioners debated the pros and cons of actually making a regulation that would require hunters to wear a full-body safety harness when hunting from an elevated position. Some saw this proposal as a “no-brainer,” but the majority of supporters already had the common sense and good judgment to already wear a safety harness.

As usual, there were some who opposed being “told what to do,” just as they usually oppose the PGC, and we know who they are. And although no one should have to be told to wear a safety harness, sort of the need for a law to drive a vehicle with its lights on at night, the BOC finally settled on “strongly suggesting” wearing a safety harness.

No matter if spending $89.99 on one of those “bargain” tree stands — not advised — at a discount store or $399.99 on a top-of-the-line stand at a sporting goods store, all manufacturers include a basic full-body safety harness. While these are serviceable, purchasing a harness that has features to enhance the hunting experience should be considered and is advised.

One of the independent organizations that helped promote the awareness of tree stand safety is the Tree Stand Safety Awareness Foundation. Formally organized in 2016, TSSA is a 501C3 non-profit comprised of a group of outdoors industry leaders dedicated to enhancing the focus on tree stand safety.

Working collaboratively the organization promotes that hunting from a manufactured tree stand is a safe way to hunt provided the hunter follows the tree stand manufacturer’s guidelines. Unfortunately, tree stand related falls continue to be one of the top causes of injury and deaths to deer hunters.

It is the focus of TSSA to ensure every hunter using a tree stand does so in a safe manner so that they come home safely to their family and friends. It is the organization’s mission to significantly reduce tree stand incidents through promotion, education and best practices.

By serving as a national resource on tree stand safety awareness, the TSSA is promoting research surrounding tree stand safety and act as a resource in the development of marketing and educational strategies for safe tree stand use. It is facilitating dialog among tree stand industry leaders, government officials, hunter-education instructors, the general public and other stake holders — all with the goal of reducing the estimated number of tree stand falls resulting in emergency treatment by 50 percent in three years.

September was Tree Stand Safety Awareness Month and the TSSA was pleased to announce that with the help of numerous hunting and outdoors industry partners, it exceeded a major goal milestone. When recently released 2019 data from the National Electronic Injury Surveillance System was analyzed it showed an estimated 1,937 people sought emergency department care as the result of an injury from a tree stand fall — which is an estimated 65-percent decrease over the baseline estimate in 2010 and is the lowest estimated number since tree stands were given their own unique tracking number that year.

According to TSSA president Glen Mayhew this reduction represents the collective work and initiatives of many organizations across the outdoors and hunting industry. Leading the way is the National Bow Hunter Education Foundation, International Hunter Education Association-USA, Whitetails Unlimited, Outdoor Sportsman Group, American Hunting Lease Association, Kalkomey Enterprises, state natural resources departments, hunter educators, outdoors media and personalities, supporting partners and many other organizations and individuals that have worked in unison toward this common purpose.

No matter how many trips a hunter takes in the upcoming seasons, a full-body safety system is a must if hunting from a tree stand. After all, no trip should result in a fall.

DOYLE DIETZ is parliamentarian of the Pennsylvania Outdoor Writers Association.