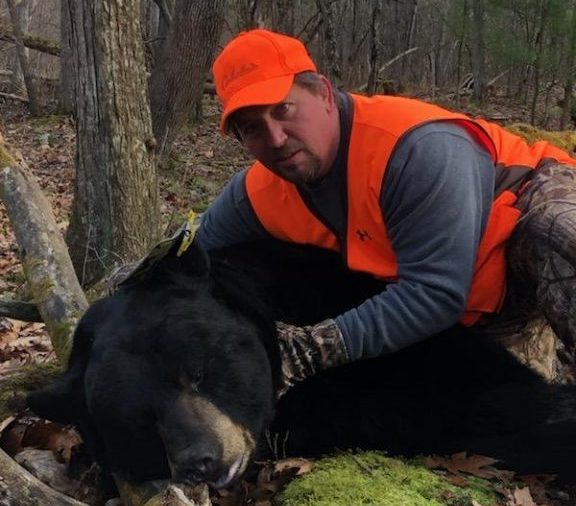 Joe Kripp didn’t plan on going hunting during the Nov. 23 opening day of bear season, but recent visits from a small bruin raiding garbage cans in the neighborhood changed his mind.

Hoping for a chance to bag the bear, Kripp ventured into a nearby swamp an hour before daylight on opening day and waited for the sun to rise. And not long after the predawn darkness was erased by the early morning light, Kripp’s bear season — the one he was going to sit out — came to an abrupt end in a big way.

Kripp didn’t know exactly how big the bear he had taken was until he brought it to the Pennsylvania Game Commission’s check station in Lehman Township later in the day. A scale revealed the bear weighed 747 pounds. It was the second-heaviest bear taken in the state, just behind an 813-pound behemoth from Monroe County.

At 7 a.m., an hour after Kripp entered the woods, he noticed movement in the thick brush. It was a bear, but the bruin was shielded behind bushes and the tangled limbs of a toppled tree. Kripp had no idea if it was the culprit that had been destroying garbage cans.

“He was just walking through,” Kripp said. “He was in no hurry.”

Kripp was a little surprised to see a bear, and so soon. He hunted the swamp intensely during the archery bear season in October and, aside from the tracks of a small bruin in the snow, didn’t see a thing.

But Kripp had good reason to return to the swamp for the opening day of rifle season.

Last year during the season opener, Kripp hunted the same swamp and shot a bear that weighed 490 pounds.

It was enormous, but nothing like the bruin that Kripp was watching in the thick brush on Saturday.

As the bear continued to meander through the swamp, it passed through a small opening that allowed Kripp to take a shot. The bear ran about 15 yards and fell behind another toppled tree – almost in the exact spot Kripp shot his bear last year.

But as he approached the bear, Kripp still had no idea how large it was due to the thick understory.

“It wasn’t until I walked right up to it that I realized how fat it was, and the head was just massive. A big animal,” he said. “I have a good idea what a big bear looks like after the one I shot last year, but this one was just enormous.”

Surprisingly, despite the bear’s incredible size, Kripp didn’t have much trouble getting it out of the woods. He was hunting alone, and immediately sent a group text to his friends. Three showed up right away and Kripp went home to get his side-by-side ATV. Using the winch on the ATV, they were able to pull the bear out of the thick swamp and then tow it the rest of the way with a rope attached to the hitch.

While Kripp had a full body mount made from the bear he harvested last year, he’s opting for a three-quarter mount this time. He will have the skull scored to determine if the bruin qualifies for the record book, and PGC staff did remove a tooth to age the bear.

“They said a bear like this usually doesn’t get this big until it’s at least 10 years old,” Kripp said. “He did have a rip in the ear, too, which could mean it was tagged at one time and lost it, which is common.”

As for Kripp, he has now harvested two bears with a combined weight of 1,237 pounds from the swamp over the last two seasons.

As far as returning for next year’s bear season opener, Kripp thinks he’ll sit it out.

But, “I’ll be out there in deer season (next year) when the extended bear season is also in, so if I do see a bear I’ll probably take it,” he said. “But I know I’m very fortunate to harvest a bear of this size. This was more than I could ever ask for.”