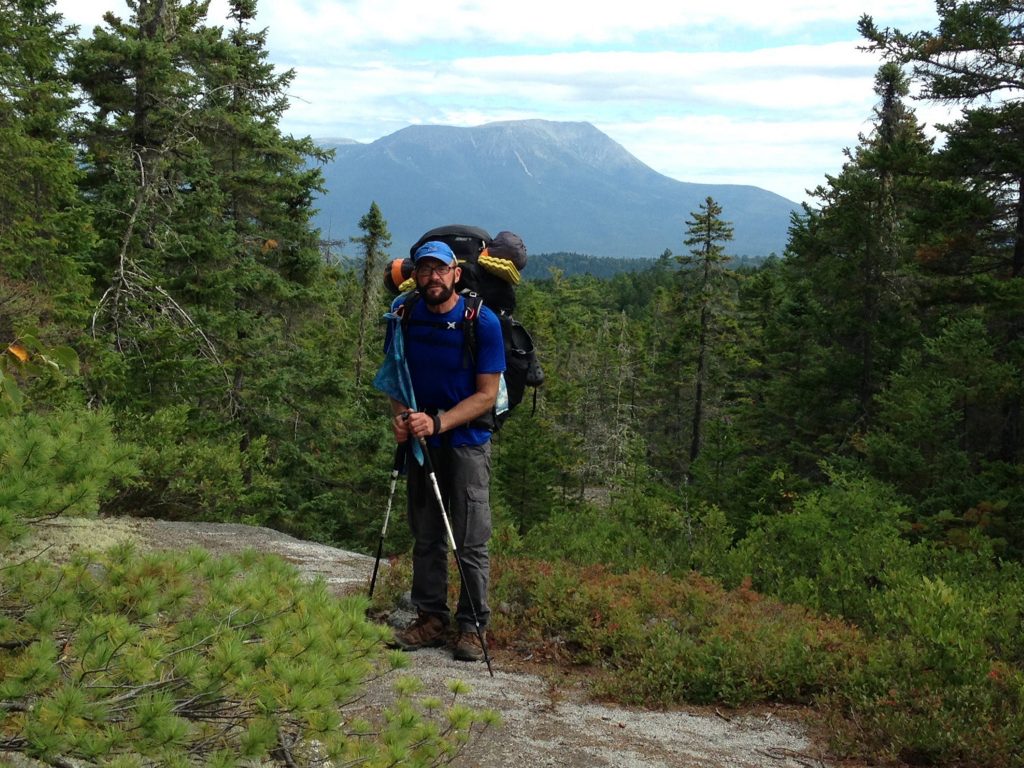 Randy Koppenhaver fulfilled a 70th birthday goal atop the northern terminus of the Appalachian Trail on Mount Katahdin in Maine.

It was a far reach from exploring the trail in Schuylkill County as a child with his father, the late Clayton Koppenhaver, a Tremont coal miner.

“I thought I was going to die on my birthday, because I summited Mount Katahdin. There were spots, hanging on the side of a rock climb, that I didn’t know if I could climb anymore. I kept telling myself if I were only 10 years younger it would be better, but I had a good time,” he said, now 71.

Koppenhaver, of Hegins, hopes with spring weather on the way, others will consider the beauty, challenge and history that await on the Appalachian Trail and attempt an adventure of their own — with some advanced preparation. A major part of the trail lies in Pennsylvania, including Schuylkill County, he said.

“I grew up in Tremont and my dad was a coal miner. He worked a half a day on Saturday. His only day off was Sunday. Many times on a Sunday afternoon, dad would take us down to Pine Grove and get on the trail. We’d just hike a couple miles. My dad was amazed and he just couldn’t get over it that there could be a trail, continuous, for over 2,000 miles. It made an impression on me,” Koppenhaver said.

A retired Navy medical service corps officer and retiree from the state Department of Environmental Protection asbestos program, Koppenhaver spent a year preparing for the trip, walking and reading about other hikers’ travels and strategies.

He began his hike in March 18, 2018, at the southern terminus at Springer Mountain, Georgia. He completed the entire length of the estimated 2,190-mile trail in two section hikes — 1,600 miles in 2018 and about 600 miles in 2019, and received his trail completion certificate. It took Koppenhaver 10 months to finish what’s known as a “flip-flop hike.”

He hiked from Georgia through Pennsylvania to the Delaware Water Gap in New Jersey, then drove to Maine. He hiked in Maine reaching the northern terminus before he went home in 2018. Last summer in 2019, he started in New Jersey and hiked back to Maine. 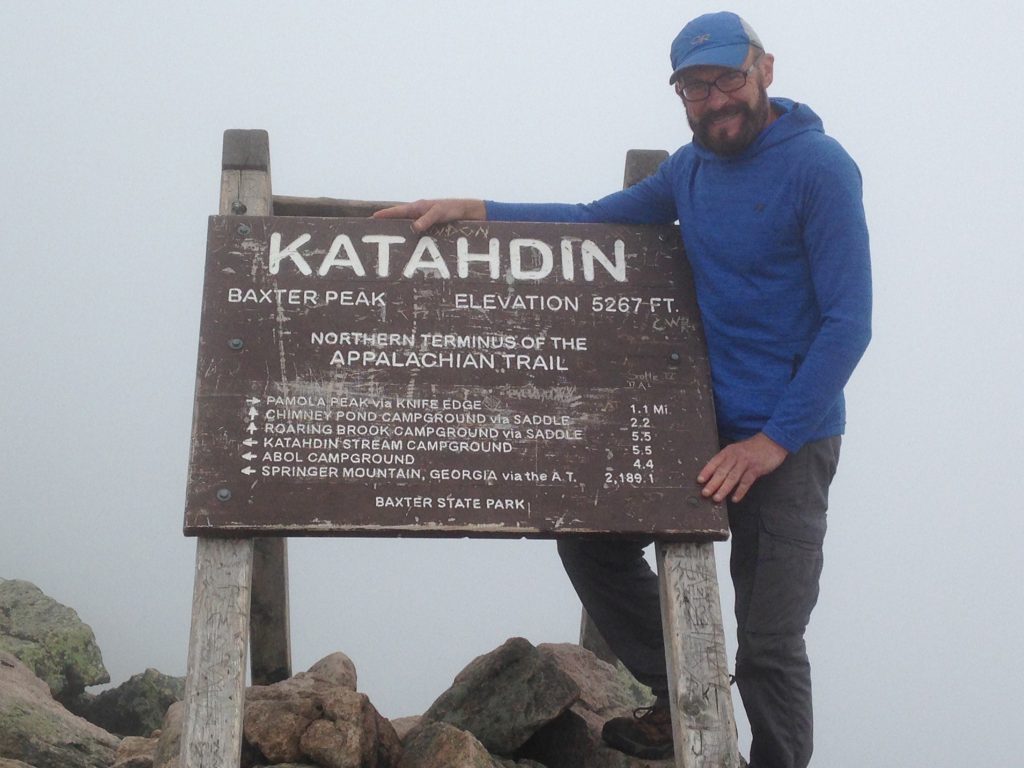 SUBMITTED PHOTO
Randy Koppenhaver at the summit of Mount Katahdin, Maine, on the Appalachian Trail.

“The trail is so diverse, it’s unbelievable. There are sections of the trail that look like a Thomas Kinkade ‘fantasy’ painting, then there are other sections that are just inhumane. You think how is a human supposed to get up there or get down there? There were several times I had to drop my pack, because I was afraid I’d lose balance with the pack on. There were places with ladders and with rebar (reinforced steel) built into the rock that you could climb up.

“I was in two ice storms in Georgia, which I was not expecting. I almost froze to death in Georgia. I enjoyed every state. I thought New Jersey was going to be a walk in the park, but it’s rugged. I was expecting New Hampshire and Vermont to be rugged, and they were,” he said.

He encountered seven black bears, wild boar, coyotes, foxes and snakes. He was hoping to see moose in Maine, but he didn’t see any, only their hoof tracks.

In the southern Appalachians at night, he could hear trees falling and shaking the ground as they fell.

He began as a solo hiker, but often would connect with others on the trail along the way.

“I met the most wonderful people on the trail. I think that was the best part,” he said.

When he was at the trail headquarters in Harper’s Ferry, West Virginia, he asked how many through-hikers there were. About 20,000 people have through-hiked the trail and about half of those are international hikers, he learned. The trail is full of people from all over the world — Lithuania, Estonia, Poland, Luxembourg, Argentina and South Africa, he said.

“Most of the international hikers I met were either German, Swiss or British. It was just such a meaningful experience to meet these people and hike with them. Most of them hiked faster than I did, but I had some really wonderful conversations,” Koppenhaver said.

“I spent a night at a shelter in Vermont with three guys from Taiwan. They spoke very poor English, but we had fun. We understood each other, but not verbally very well.”

Hikers have a trail name that is given to them by fellow hikers; they don’t pick their own moniker. Koppenhaver’s was “Diamond Blue,” due to his blue attire, he said. 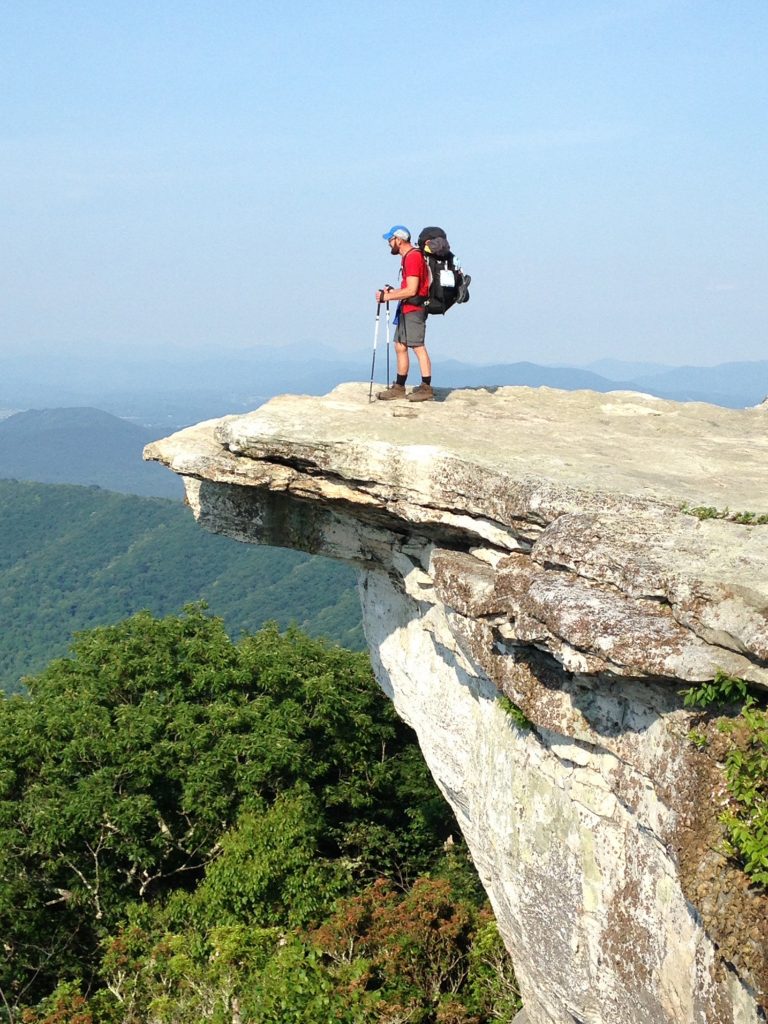 While most of the younger hikers preferred to get off the trail and go into neighboring towns to get supplies, Koppenhaver said he tried to remain on the trail for at least a week at a time.

Staff at the Hegins and Pitman post offices were helpful during his preparation to mail out 19 resupply boxes along the trail for his journey. Since the Hegins post office was computerized, all the boxes would have had to be mailed at once, he learned, and would have possibly sat for months at their addressed locations until he reached that point on the trail. They referred him to Pitman.

Since the Pitman post office was not computerized, Koppenhaver’s resupply boxes could be staged for delivery about two weeks before his estimated arrival time at designated trail post offices along his route.

“I had no problem whatsoever with my resupply. They were always there,” he said.

Koppenhaver said it took 14 years for the trail to become connected in its entirety through 14 states, just one of the interesting trail facts he learned.

Virginia has the largest trail mileage at 542 miles. When hikers are going through Virginia, they call it the “Virginia Blues,” because it seems like it takes forever to get through the state, he said. Maine is next with 282 miles and Pennsylvania is number three with 229 miles. Hikers gave it the nickname “Rocksylvania,” due to the sharp rocks that can pepper the trail, he said, although he enjoyed the stretch.

Roughly 35 miles are in Schuylkill County, with parts straddling Schuylkill, Berks and Lehigh counties, he said.

The longest river crossing on the trail in all 14 states is the Clarks Ferry Bridge, which crosses the Susquehanna River in Pennsylvania near Duncannon, he added.

For additional information, visit the website for the Appalachian Trail Conservancy at appalachiantrail.org.

Koppenhaver is the father of two sons, Jeremy, 38, and Timothy, 36, and has five grandsons. He’s making a photo album for each of them, selecting from his 2,400 trail photos.

“I want my grandsons to remember me as the grandpa that through-hiked the Appalachian Trail long after I’m gone.”

Stargazing: Loads of summer still in the heavens
Elk Expo coming this weekend
Frog lures a great choice for summer bass fishing
No carping about the action when battling these fish
Staff