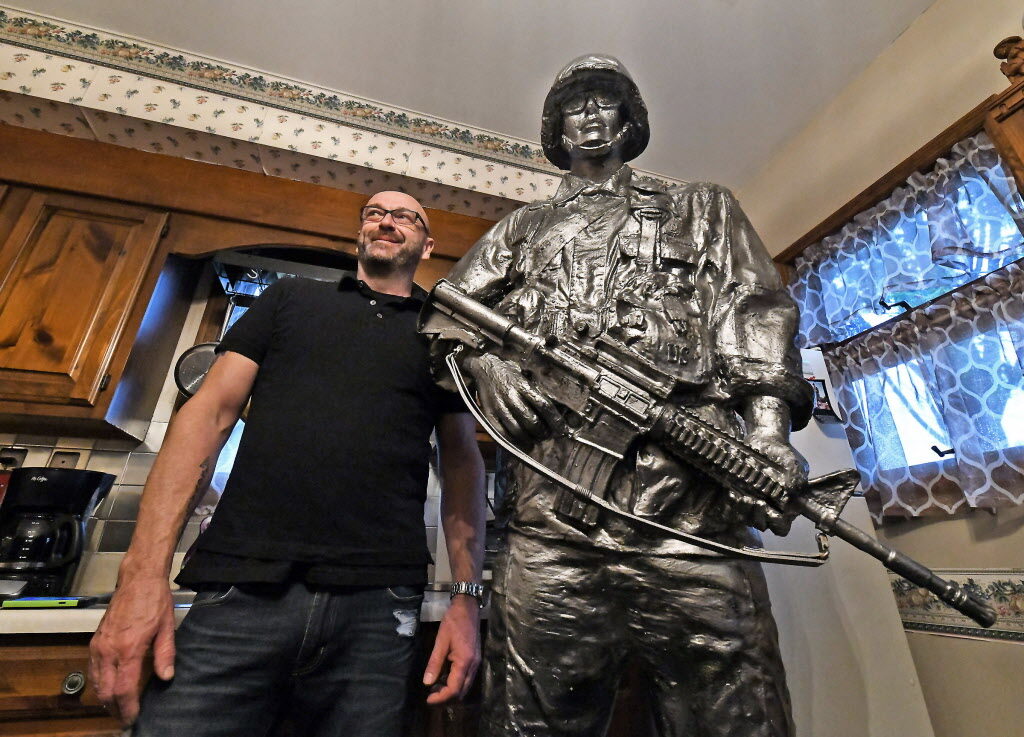 Mark Zinskie fondly remembers casting toy soldiers in metal with his late father when he was a kid.

Now, the artist and Olyphant resident is about to see more than 440 hours of work come to fruition as the Lancaster-based ART Research Enterprises foundry casts his 7-foot-tall stainless steel sculpture of a Gulf War soldier.

“I remember those times with my dad, but it’s in epic proportions right now,” Zinskie said. “It just conjured so many good memories.”

Seeing a lack of monuments for soldiers from the Gulf War and onward, Zinskie, 48, started sculpting the monument — now known as the Freedom Fighter — in 2011 to honor the modern-day soldier.

“They need to be honored just like the soldiers of old,” he said.

He plans to have the monument placed on Lackawanna Avenue in Olyphant by the spring, although he hopes they can finish it even sooner.

“If we got it done earlier, that would only be better,” he said.

Wearing military fatigues with a rifle in its hands and a canteen slung across its back, the stainless steel soldier will stand permanent watch atop a brown granite base laser-etched to look like desert camouflage, Zinskie said. He described the base as an “avant garde” design with a geometric shape.

“Basically if you took a cube, heated it up and twisted it just a little bit,” Zinskie said.

The borough originally planned to place the statue at the Queen City Train Station on Lackawanna Avenue, but after concerns of train traffic damaging it, they decided to place it at the flagpole across from the station, he said.

Zinskie was thrilled that the Freedom Fighter will have a more prominent spot in town, calling it his ideal location for the monument.

When Freedom Fighter Committee coordinator Kim Onda Atkinson began fundraising for the construction of the monument in 2017, she expected it would take three to four years.

Funding stalled out over the fall and winter with the project stuck at $20,000, but a $25,000 Local Share Account grant gave the committee enough to cast the statue. However, with $45,000 raised, they still need an additional $30,000 to fund the fabrication of the granite base and construction costs, Atkinson said.

For Zinskie, finally dropping off the sculpture at the foundry in May felt “borderline spiritual.”

“That work of art has been going on in my personal life for so long,” he said, adding that he shed a tear as he dropped it off. “It was with me for so long. It felt bad walking away from it.”

He believes the completed project will allow him to feel closer to his father, Army Sgt. Harry “Skip” Zinskie Jr. Zinskie lost his dad to cancer when he was 13. Casting little soldiers with his dad was one of his favorite things to do, he said.

“It’s connecting me to my dad,” Zinskie said. “When that thing comes out of that mold, I feel like his spirit will definitely be with me.”