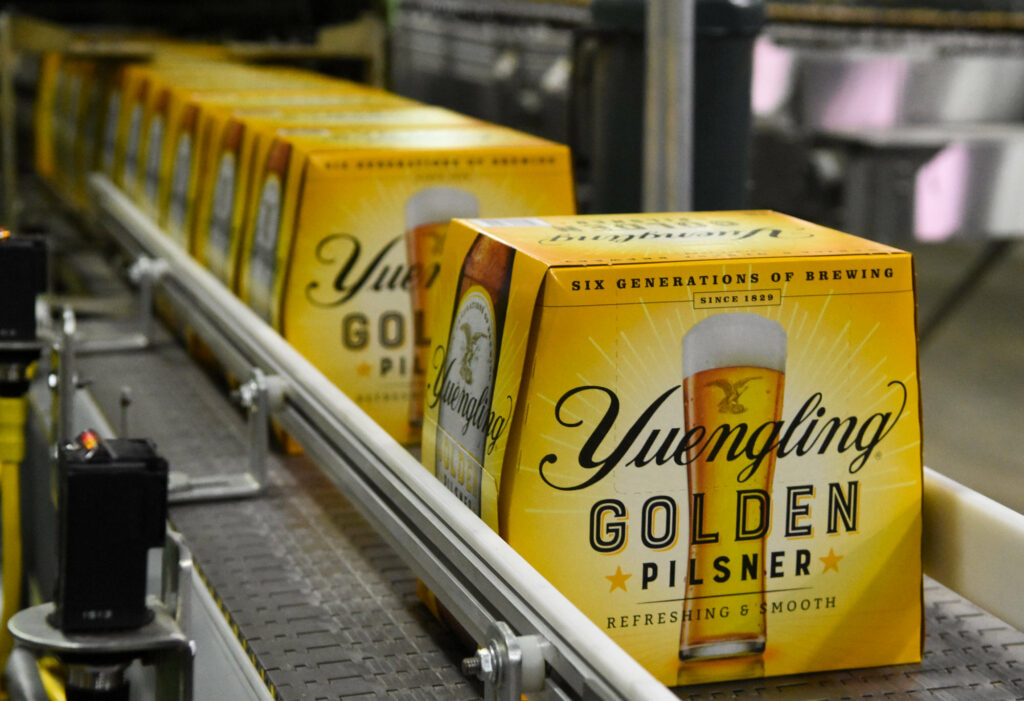 They say they have “beer in their blood” — and Pottsville roots.

The Yuengling sisters — of the D.G. Yuengling & Son Inc. family — have seized a golden opportunity to expand their brewery’s brand while continuing to support philanthropic causes in the city and beyond.

It includes the sisters’ signature mark on the brewing industry with the creation of their newest product, Golden Pilsner.

“Our roots are here, so that says a lot,” said Wendy, chief administrative officer for the brewery. “My great-great-great-grandfather made his way to Pottsville in the 1800s and the original brewery that he built in 1829 was the Eagle Brewery, down where City Hall is. After that burned down, they built the current location on Mahantongo Street. We’ve been a staple in the community ever since.”

Today, the brewery is a major employer, too. Fifty-nine people work at its Pottsville location, 120 are employed at Mill Creek and 95 at its Tampa, Florida, brewery. Another 90 sales employees work across the company’s 22-state footprint, for a total of 364 workers.

“There’s something to be said for the people that work for the brewery and the loyalty of the community; that was a big factor in why we chose to build another brewery in Pottsville,” Wendy said about the Mill Creek site added in 2001. “The community’s been good to us, the state’s been very good to us, and we wouldn’t be here for 190 years if we didn’t have that support. That’s very special.”

Pottsville’s always held a special place in the family’s history. It’s where the company’s founders decided to stay and raise their families.

“About 10 percent of our employees have or have had family members working here. It’s not just a family business for us. It’s the employees that have been working with us over the 190 years,” said Debbie, culture and employee engagement manager. “The employees have been very loyal.”

Workers have endured Prohibition and the World Wars with Yuengling.

“Even during the 1960s, ’70s and ’80s when the company was not doing very well,” she continued in discussing employee loyalty. “They were here when my grandfather worked here and during the transition time with my dad. We’ve been very fortunate with our loyal and proud employees.”

“So it’s cool to see it across departments, and multigenerational families that are here, too,” Jennifer, vice president of operations, said. 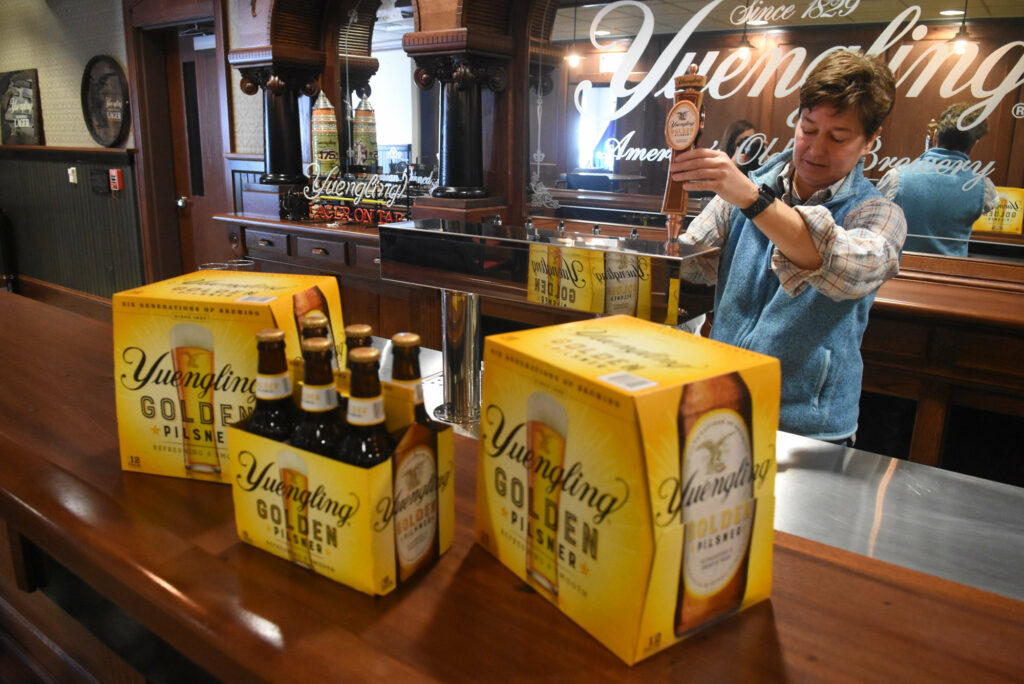 Their father and company president, Richard L. “Dick” Yuengling Jr., has pledged $2.8 million to the city for construction of the new Mahantongo Street Parking Center just down Mahantongo Street from the brewery and gift shop.

Other philanthropic efforts have included the annual Light Lager Jogger, which marked its seventh year this spring and supports Operation Gratitude. It includes as many as 3,500 runners and draws thousands more to the city.

This Saturday, Yuengling will offer a free city concert with the alternative rock band Better Than Ezra, which, along with fireworks, will cap a day of music, food and Yuengling products. Also, for the entire month of July, 5 percent of proceeds from in-store gift shop sales will go to the Pottsville Continued Progress Project in support of the city’s revitalization.

Many scholarships and donations have gone to support veterans or their families, like Team Red, White, and Blue and TAPS, Tragedy Assistance Program for Survivors.

When the Yuengling sisters saw consumers were looking for a refreshment brand, that prompted the development of Golden Pilsner in 2018.

According to Wendy, the sisters were open-minded to trying something new.

“I think when my dad bought the business, the brewery was barely surviving. We’re in a much different situation right now. We have a very successful company and we’re selling beer in 22 states and when we see opportunities to do things better or plan a new arena, like we did with Golden Pilsner, we want to take advantage of it,” she said.

“We drink beer. It’s in our blood. So, this was a product we got excited about and it was nice to add something new to the portfolio that complements Lager, Light Lager and Black & Tan,” Wendy said.

“I think we’ve had a great response from our consumers, our fans,” Sheryl, order services/administration, said.

“Part of our business model, too, is to make great beers, but sessionable beers. When I say sessionable, I mean beers where you can sit down and essentially have a session,” Jennifer said, explaining the alcohol content of them is not so over the top that a patron can’t sit down and enjoy more than one.

“They’re sessionable beers and they’re at a relatively decent price point. You’re not going to outspend yourself trying to have a few of our brands,” Jennifer said.

In addition to having a new brew, the Yuenglings are considering enhancement of their Tampa property and are in the early stages of the zoning process. A Yuengling Brewery experience could include a hotel, restaurant, gift shop, microbrewery and tasting room, beer garden and conference center. The improvements would be on 5 to 8 acres that Yuengling already owns at its facility.

“Twenty years ago, we opened our first brewery in Florida to give consumers more opportunities to experience our brand. Since then, Florida has become a second home for Yuengling, leading our growth in the southern half of our 22-state footprint,” Wendy said. “As consumer interest in locally crafted beer continues to grow, we are always looking for ways to engage our loyal fans and re-envision the Yuengling experience in Tampa. This new development will not only offer visitors an enhanced brewery hospitality experience, but will also increase our presence in the local community.”

“We have a sponsorship with University of South Florida, right next door to us. We sponsor the Sun Dome, which is now the Yuengling Center. So, it’s just another way for us to put a stake in the ground down there and say we’re a local brewery in Florida as well,” Wendy said.

Saturday’s 190th event in Pottsville runs from 1 to 10 p.m., and includes music, street vendors and beer gardens. It concludes with the Better Than Ezra concert from 8 to 9:30 p.m. on the main Progress Avenue stage, with fireworks provided by the city to follow.

“You can come into town. You can spend your money on some food and beer. You can listen to some music and enjoy the downtown area. I think it’s a nice opportunity for everybody,” Debbie said.

The sisters wanted the commemorative milestone to be a day of celebration and have had several events leading up to Saturday.

“It’s been a great venture between PADCO and the downtown business association, the city itself, from their security and first responder system, everybody. I can’t imagine the organizational aspects that have gone into this. Our sales and marketing department folks have really coordinated very well,” Jennifer said.

“All the efforts that are happening with the revitalization and growth of the downtown businesses, I am all for and a huge supporter of that,” Wendy said. “There’s not many places that can say they’re home to America’s Oldest Brewery, and I think that’s attractive to people.”

NOTE: Outside alcohol will not be permitted within the venues, and all other city ordinances and state laws will be enforced outside the venues.