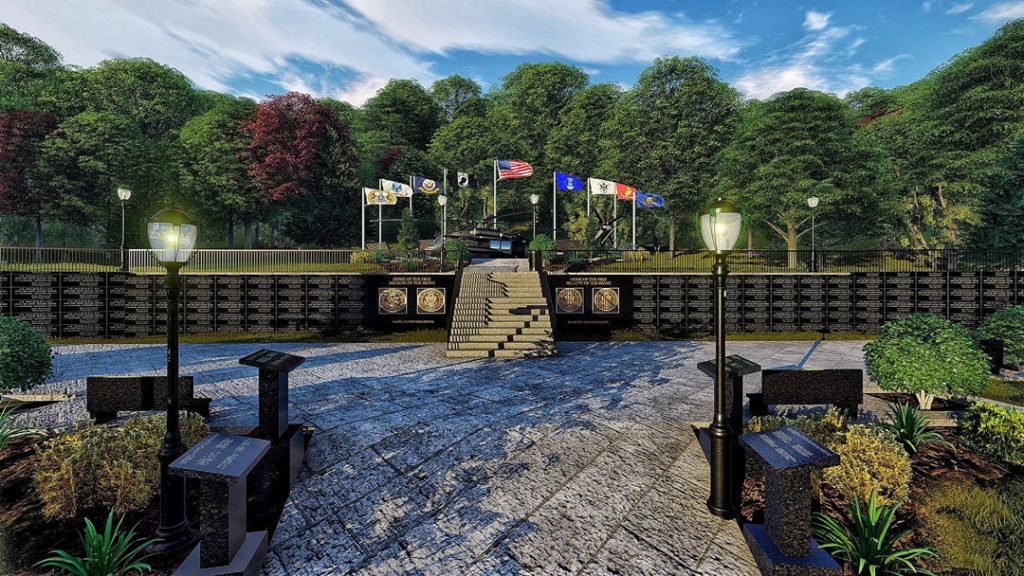 After COVID-19 delayed plans for an upcoming veterans park in Archbald, crews recently began chopping down trees and preparing the site for a sprawling black granite monument honoring more than a thousand veterans.

Crews spent the past several weeks working on the site of the future Archbald Borough Veterans Monument Park on Kennedy Drive across from Maria Boulevard, said Rob Turlip, the park’s committee chairman and a retired Army major. In addition to a pavilion and military vehicle on display, the 2-acre plot will eventually be home to a 400-foot-long, 6-foot-tall semicircle wall covered in laser-etched black granite tiles bearing the names of 1,600 veterans.

The project will cost about $1.1 million raised from a combination of grant funding and donations, down from initial estimates of $1.4 million, Turlip said.

Selling the granite tiles will generate about $130,000, Turlip said. Prices will range from $325 for a text-only tile to $900 for a tile in a prime location on the monument with a photo and military emblem. Tiles will include a veteran’s name, rank, branch of service and the era he or she served.

The committee initially hoped to begin selling tiles in April, but due to coronavirus-related shutdowns, they won’t begin taking orders until January, Turlip said.

It wasn’t the project’s first delay, though.

Work was first slated to begin in fall 2019, but surveying the property took longer than expected. Lockheed Martin donated the land for the park but needed the survey completed before it could transfer the land. In January, the committee expected work to begin over the summer.

Now, Turlip expects crews to finish cutting down trees by the end of the month, with the committee putting work out to bid and applying for permits in November. Construction would begin in the spring.

The park committee, which has about 35 core members, started the project in 2016 as a group of volunteers, he said.

“Everybody is thrilled the project has taken off the way it has,” Turlip said.

Mayor Shirley Barrett hopes the finished park will draw people from out of the region to Archbald, bringing more traffic to local businesses.

“I’m very proud that it’s going to be in our town and honoring our veterans,” she said.

For information or to donate to the project, visit archbaldboroughveteransmonumentpark.org or call Turlip at 570-876-1800.