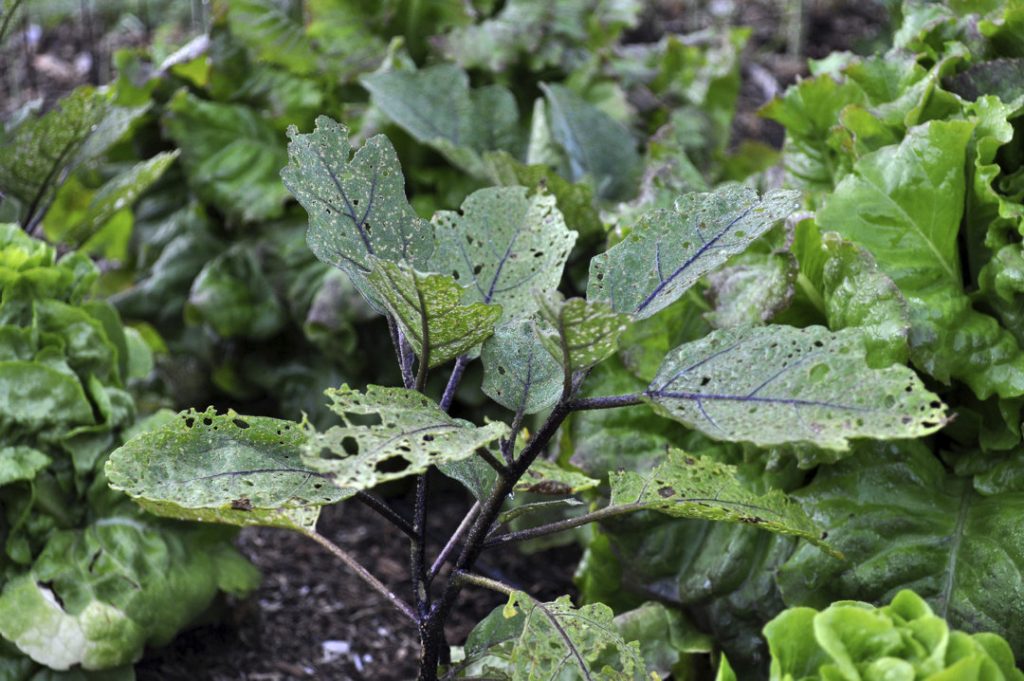 OK, so you’ve got your vegetable and flower transplants in the ground, their roots are reaching out into surrounding soil, and stems are starting to grow.
Wait before you turn your back on them! A few — just a few — common pests might be lurking.

Transplants are threatened by three kinds of pest damage this time of year: Stems might be chopped off at the soil line, leaves might be chewed, and/or leaves might be shot full of tiny holes. The most likely culprits are, respectively, cutworms, slugs, and flea beetles.

All three pests have cosmopolitan tastes, attacking practically any transplant you set out. Fortunately, they can be kept in check without pesticides.

First though, let’s look at a bug that’s NOT a threat to your vegetable plants: cicadas.

This is the year for the emergence, after 17 years cozied up in the soil, of Brood X cicada. About a dozen Eastern states are or will see cicada swarms, with the nymphs emerging from the ground once it warms up, and then crawling up a tree or some other vertical surface to molt. Leaving their “shells” behind, they proceed to mate.

Some people call these insects “locusts.” They are not locusts, but a kind of grasshopper. No need to fear their sting or bite. They, and their obnoxious grating noise, are just a bother.

Cicadas don’t appear everywhere within affected states. One year I drove a half-hour from my home in upstate New York to experience them. Another year (different broods have different emergence cycles), they were in my yard, but absent in a friend’s yard a couple of hundred feet up the street.

Damage from cicadas is to woody plants, most obviously from the egg-laying slits they make on small stems.

As for the three common pests:

Cutworms only take a few bites out of new transplants, which doesn’t seem like it would do much harm, except that those bites are at ground level.

Attacked seedlings topple over, dead. Don’t confuse this damage with damping-off disease, which is caused by a fungus that also attacks at the soil line, but usually affects only very young, newly sprouted seedlings.

Cutworms can be repulsed by some sort of barrier, such as a cardboard collar around each plant. Toilet paper tubes cut a couple of inches long are convenient for this purpose. Surround each transplant and press the collar a bit into the soil

Another approach is to fool the cutworm, who, before taking a bite of a plant, wraps its body around the stem to make sure it is tender enough. Once the stems of vegetable and flower transplants toughen, cutworms leave them alone. I fool cutworms by sticking a toothpick in the ground right up against each of my transplants. The insects think they are embracing small, woody-stemmed trees, and leave the young plants alone.

Another method to foil cutworms (which I have not tried) is to trap them in foot-deep holes, made with a broom handle or inch-thick dowel. As daylight approaches, the cutworms climb into these holes for shelter. What they don’t realize is they are incapable of ever climbing back out.

Fortunately for us gardeners, the life of a cutworm is not easy, with threats from birds, ground beetles and certain small, parasitic wasps.

Cutworms often are few enough in number that if you scratch around in the ground near a damaged plant, you can find and kill the cutworm. Do this regularly and at some point even the toothpicks or collars will be unnecessary.

Chewed leaves are likely the handiwork of slugs, nocturnal creatures who especially love wet weather. These slimy creatures, from a couple of inches to half a foot or more in length, are basically snails without shells. Besides leaving ragged leaves, slugs make their nocturnal presence known the morning after by the shiny trails they leave behind.

Slugs avoid anything sharp or caustic against their slimy bodies, so if you sprinkle a circle of sharp sand, diatomaceous earth (the kind sold at garden suppliers, not the kind used for swimming pool filters) or wood ashes around your plants, a slug will think twice before crossing this barrier. Renew these barriers after rains, when slugs are most active.

You could take a flashlight into the garden at night and sneak up on slugs while they are at work. Mano a mano combat is difficult against these slimy creatures, though, so take along a saltshaker. Sprinkling salt on them will kill them.

Beer is also an effective poison bait for slugs. Put a shallow pan of beer on the ground, and almost immediately slugs will start inching to their demise. No need to open a fresh bottle each night; slugs are happy even with stale beer. Some gardeners report good results with only yeast plus water. Be aware that it is possible to attract more slugs to an area with a beer or yeasty attractant.

Leaves perforated with small holes are a sure indicator of flea beetles, who especially like the leaves of cabbage, arugula, tomatoes and eggplants. The beetle itself is tiny, shiny and black, and will hop away as you approach it.

I read of a gardener who capitalized on this habit by building a contraption that looked like a high-riding skateboard, with a handle, which is pushed over a row of plants. A horizontal metal wire down across the front of the board disturbs each leaf — and the fleabeetles — with each pass. Flypaper tacked on the underside of the board catches the beetles as they hop away. I’ve never tried this method.

I have thwarted flea beetles by covering plants with a lightweight “row cover,” a sheer material through which light, air and water can pass, but not pests.
Plants tolerate a certain amount of leaf damage from the likes of slugs and flea beetles, with remaining leaf areas becoming more efficient to make up for lost ones. Keep your plants healthy and they’ll usually grow vigorously enough to keep ahead of or outgrow such damage.