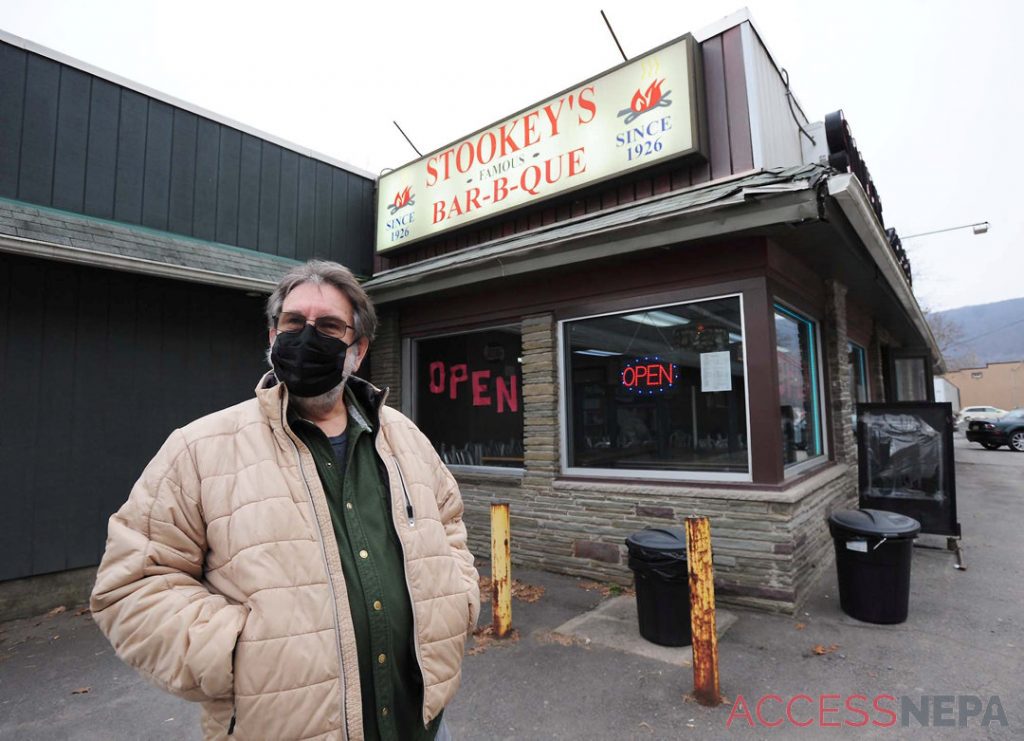 PLYMOUTH TWP. — While the COVID-19 pandemic has taken a toll on the restaurant industry, Stookey’s Famous Bar-B-Que stands out as a success story.

The local staple has reached its 95th year in business this year and has remained profitable while offering takeout only throughout the pandemic, said Ralph Frank, 71, the third generation owner of the family restaurant.

“I’ve been able to keep my staff, pay my bills and remain profitable,” Frank said. “We have loyal customers. In 95 years, you have two or three generations of customers who come through the door. That’s why we remain profitable and the fact that our products haven’t changed.”

On Monday, a brown bag special featuring Stookey’s pork BBQ sandwich, a bag of chips and a drink was a popular takeout deal. The pork BBQ sandwich is the most popular seller at the restaurant, Frank said.

Frank tried to sell his restaurant last year and buyers were interested but backed out of the deal when restaurants were forced to close because of the pandemic.

He has been offering takeout since then and he said he plans to put the restaurant up for sale again in the spring because he hopes to retire.

“Selling it is the only way I would hope it would still be here,” he said. “I would stay on to help with the transition and training so we could keep it as is with the quality of products and services. It’s a landmark that’s still here.”

Frank has been running Stookey’s for the last 20 years and he has continued a long tradition of his family’s secret sauce served with freshly smoked meats.

Over the last 95 years, the restaurant has transformed from a small roadside stand to today’s barbecue spot.

Frank showed a black and white photograph of the original Stookey’s that hangs inside the restaurant behind the counter.

His grandparents Ralph and Margaret Stookey started the business in 1926 next to an open pit where large cuts of fresh pork were smoked daily.

They called it Stookey’s Barbeque and that’s where his grandparents served a wood smoked pork barbecue sandwich in a secret homemade sauce that is still used today.

The small stand on Route 11 also served as the Stookey family’s home where they lived and worked with their daughters Shirley and Jean Stookey, who later took over the restaurant in the 1950s.

By 1980, Ralph Frank’s parents Conn and Shirley Frank developed a larger menu which included soups, baked potatoes and salads and in 1984, the old outdoor barbecue pit was replaced by a stainless steel wood fired smoker.

Ralph Frank has run the restaurant since 2001. The restaurant is now open daily from 10 a.m. to 8 p.m. for takeout.

While he could offer indoor dining now, he said he is still “uneasy because of the current state of the pandemic.”

“We thought takeout would be the safest and easiest way,” he said.