For nearly a century, the Solemn Novena to St. Ann has drawn flocks of the faithful to West Scranton, creating a tradition deeply rooted in faith passed from generation to generation each July.

The tradition will continue for its 96th year at St. Ann’s Monastery and Basilica from July 17 to 26, though under vastly different circumstances in the midst of the coronavirus pandemic.

Seating in the basilica will be limited to a fraction of its capacity, masks will be required at all times, there will be fewer services each day with no outdoor services and several special services will be scrapped altogether, the Very Rev. Richard Burke, C.P., said. The Mass of the Anointing of the Sick and the Children’s Mass are both canceled, he said.

During the novena, St. Ann’s normally holds five daily services. Because volunteers will sanitize the basilica between every service this year, they will only hold four per day, canceling the 7:30 p.m. service, Burke said. However, on July 26 during the Feast of St. Ann, they will hold the final 7:30 p.m. Mass, which the bishop will celebrate.

The need to sanitize the church also means the afternoon Adoration of the Blessed Sacrament is canceled, Burke said. Additionally, the church is halting its annual food sale during the novena.

Burke and other church officials spent six weeks discussing how to safely hold the novena, which usually draws tens of thousands of people to the church over 10 days of services.

“It was a very long process to come to a decision about it,” he said. 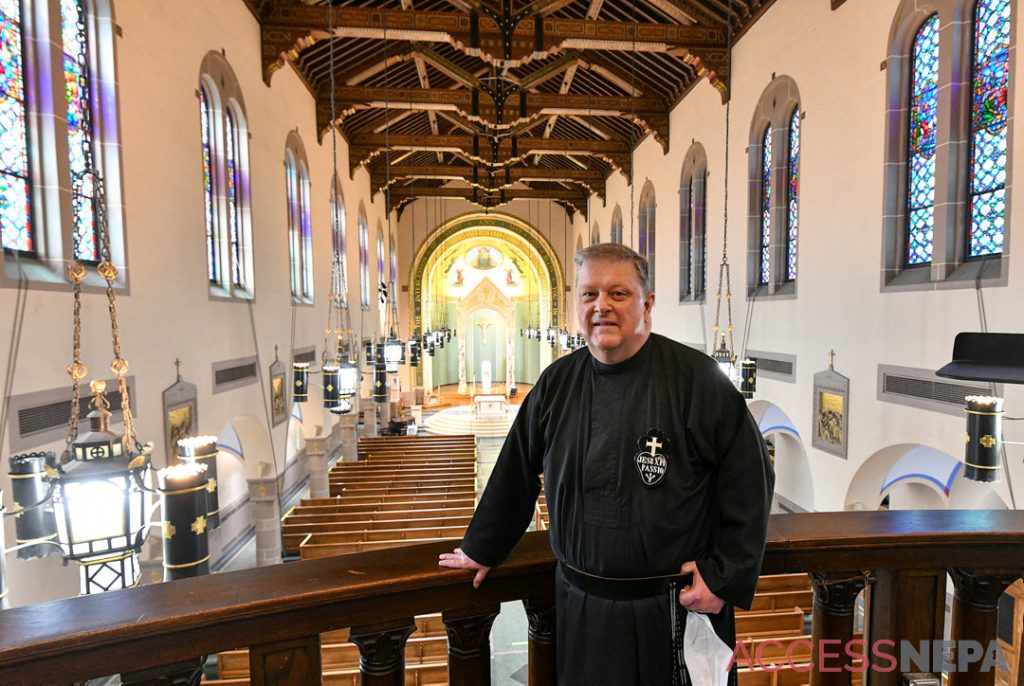 JASON FARMER / STAFF PHOTOGRAPHER
The Rev. Richard Burke, shown at St. Ann’s Monastery and Shrine Basilica, said they will hold the 96th annual Solemn Novena to St. Ann next month, though it will be drastically different from previous years.

Only 135 people will be allowed inside the basilica at any time to maintain social distancing, Burke said. Normally, the basilica comfortably seats 900 but could squeeze in 1,000 people, he said. They will have hand sanitizer stations at all five doors, with one door being a designated entrance and the others as exits.

During Communion, clergy will use hand sanitizer any time they accidentally touch someone’s hand. If the person insists on receiving Communion on his or her tongue, priests will sanitize their hands immediately after.

The novena normally includes several outdoors services, but fearing those services would lead people to congregate, linger and talk, they are moving all services indoors, Burke said. Attendees can still park outside, receive Communion in their cars and listen via an FM radio transmitter or outdoor speaker system. There will be some socially distanced seating on outdoor benches, he said.

Burke hopes turnout will be smaller this year.

“I’m hoping it won’t be tens of thousands,” he said. “I’ll just be running around all day saying, ‘Keep your distance.’”

He encourages anyone who could be vulnerable to stay home. Services will be broadcast on both social media and television.

The novena has never been cancelled — not even during World War II — and Burke believes both COVID-19 and the current social unrest will lead to the faithful pray more fervently.

“Praying in the novena in this way hopefully is going to help us solidify our vigilance in taking care of one another from this pandemic,” he said, pointing to the notion of wearing face masks to protect others.

Faith gives people a reason to move forward in the midst of struggle, said the Most Rev. Joseph C. Bambera, bishop of the Diocese of Scranton.

“The Solemn Novena in honor of St. Ann evokes memories of parents, grandparents and cherished family traditions for so many people who participate each year,” he said. 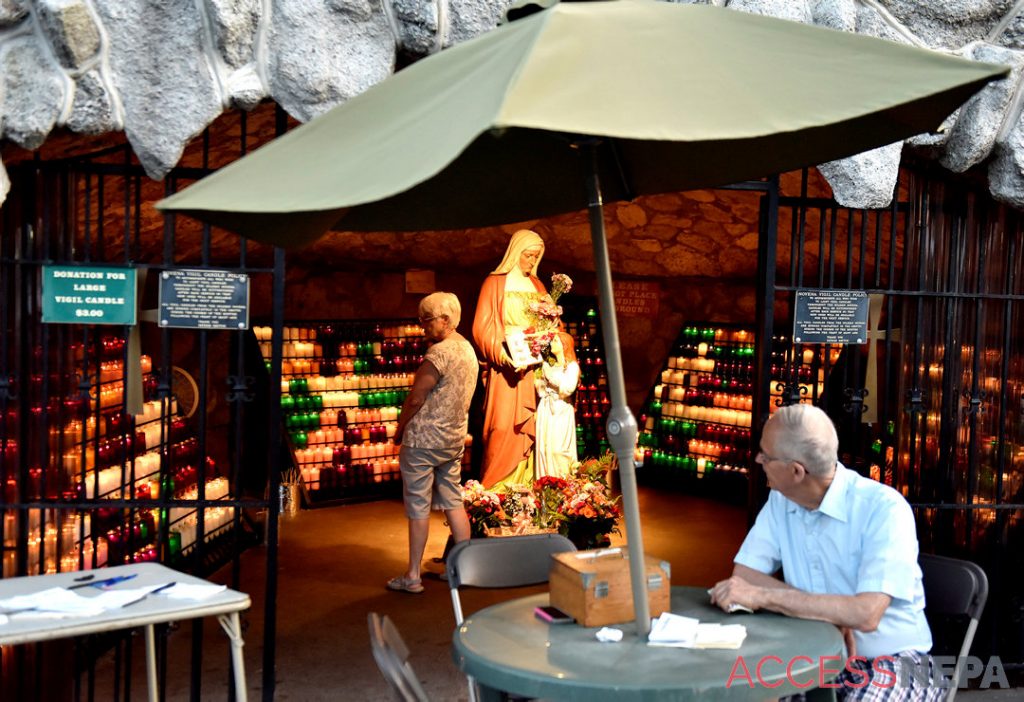 ACCESS NEPA FILE
A woman visits the prayer candles next to the statue of St. Ann inside of the grotto of St. Ann’s Monastery and Shrine Basilica in Scranton in 2019.

Jo-Ann Reif of Scranton attended her first novena when she was only 4 months old and has continued attending off and on for nearly seven decades. She will be a lector this year.

“It really is like a little vacation going over there. It’s so quiet. On a beautiful day … it really is very peaceful over there,” she said, adding the priests’ messages are always interesting. “I was afraid I would miss that. We certainly need it more than ever, don’t we?”

John Coval, 48, estimated he’s attended at least 30 novenas over the years, with his first being when he was 3. The city resident intends to continue the tradition, attending it with his wife and children. His children would be devastated if they couldn’t attend.

“I think in today’s times there’s such disregard for traditions or the inability to continue them … this is one of the traditions that is so memorable,” he said.