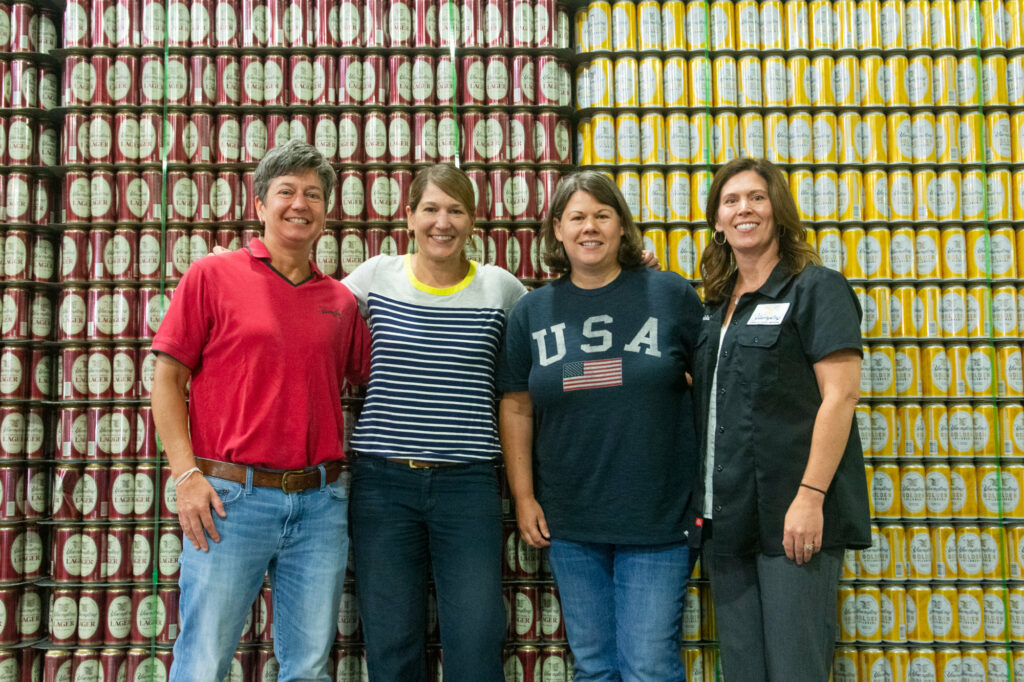 From childhood memories of rollerskating in their father’s beer distributorship to helping customers as teens in the family gift shop, the four Yuengling sisters navigated their own paths into leadership roles at America’s Oldest Brewery.

As D.G. Yuengling & Son Inc. celebrates its 190th anniversary this year with a special celebration Saturday in the city, Jennifer, Debbie, Wendy and Sheryl Yuengling shared how the sixth generation is continuing the family’s commitment to brewing quality beer.

The siblings developed and launched their own beer offering, Golden Pilsner, adding to Yuengling’s portfolio in 22 states. It’s the fourth of Yuengling’s core brands, which include its Traditional Lager, Light Lager and Black & Tan. The daughters bring with them a work ethic inspired by their father and company president, Richard L. “Dick” Yuengling Jr., now 76.

“My early memories growing up in the beer business were at my dad’s beer distributorship,” said Wendy, chief administrative officer. Their father had operated the Tomalonis distributorship out of New Philadelphia and later Wholesale Beverage in Pottsville in the mid-1980s before becoming brewery president in 1985.

“I have great memories spending time there rollerskating, pushing my sisters around on hand trucks and just drinking soda and watching people come in and buy beer and chips. So that was my first exposure to the industry.

“When my dad got involved with the business in 1985, he would be coming down to the brewery in the evenings and we’d come down at times. We’d see him load trucks and ride in the back of the truck with him. It was neat to get a taste of both sides of it,” Wendy said.

“I do remember traveling up there with him in the evenings. I worked on the cash register with him,” said Jennifer, today’s vice president of operations. “He bought the place down here on Westwood, which was Wholesale Beverage. Then when I was in eighth grade was when he came into the brewery. So at that point in my life, I was doing more of my own activities, but when I came back from college, for a couple summers I worked at the gift shop and did some tours.”

Debbie, who now serves as culture and employee engagement manager, remembers the skating and coming back to work with her father at night when he’d do a plant walk-through and finish up paperwork.

Their father set an example early on that a 9-to-5 schedule was not going to be the norm, and that discipline and hard work were expected.

“Every day you learn lessons, but I think the biggest one for me is his work ethic. That was instilled in us at a very young age,” Jennifer said. “He was usually up and out the door, going to work before we were even up; home, supper and then he was back into work in the evening.”

Sheryl, who’s responsible for order services/administration, said their roles in the company were not automatic.

“We came in as employees; we didn’t come in as sixth generation ready to take over,” she said. “He taught us to go in different areas of the brewery and … familiarize with the different employees that were here. We were employees.”

“I think he has a very commonsense approach to things that we all try to learn from and emulate,” Wendy added.

She said her father’s routine of going to work early and going back in the evenings continues despite his age.

“So he sets quite an example, not just for us as a family, but for the company, for all of the employees,” she said.

She noted how there are a number of employees who worked through her father’s tenure and now work with the four daughters, but also worked for their grandfather.

Debbie appreciates her father’s passion for the industry.

“It was always about the beer industry for him, because he was with the wholesalership to begin with and he understood that end of it,” she said. “He understood the transportation, getting the trucks there. He was moving into the warehouse and the production side of the whole brewery, so I think just knowing the industry in and out gave him an edge to it.”

Each sister eventually returned to work in the family business full time, Jennifer and Debbie in 1996, Sheryl in 2001 and Wendy in 2004.

“Each of us sort of made our own path and gravitated to our own fields of interest,” Jennifer said.

“I started right in the warehouse on Howard Avenue and stayed there for 10 years almost,” Sheryl said. “Mostly, I took care of the outgoing loads, warehouse inventory.”

Debbie returned after a brief break.

“After I graduated from college, my degree was in accounting, so I stayed more in the office end of it, working in payroll, accounts payable, accounts receivable. I was here a little over 10 years, then I took a leave to take care of my kids, and then I came back a few years ago,” she said.

Meanwhile, Wendy did not live in Pennsylvania when she decided to come back. She worked with beer distributors in Maryland and Washington, D.C.

“Even though you grow up in a family business, I really didn’t know the ins and outs of selling to our distributors and selling to retailers. I learned all that over the first couple of years,” she said.

“As I got more involved in the company, I decided to rotate through all the areas of the business. I transitioned into marketing and I did that for a couple of years. Then I worked in operations, learning the brewing and packaging side, the warehouse side of it. Then I made my way to administration. I learned the financial side of it, the HR (human resource) side of it. That’s where I’ve landed now,” Wendy said. “My role touches everything from HR, IT, accounting, sales and marketing.”

To mark the 190th, there will be a celebration from 1 to 10 p.m. Saturday, including Yuengling Brewery Beer Garden, downtown beer garden, vendors on Mahantongo Street and Progress Avenue and local bands.

The free summer concert celebration will be highlighted by the alternative rock band Better Than Ezra, which will perform on the main stage on Progress Avenue from 8 to 9:30 p.m., and the event concludes with fireworks.

Yuengling has added its personal touches in 2019 with products, events and sponsorships. They include: