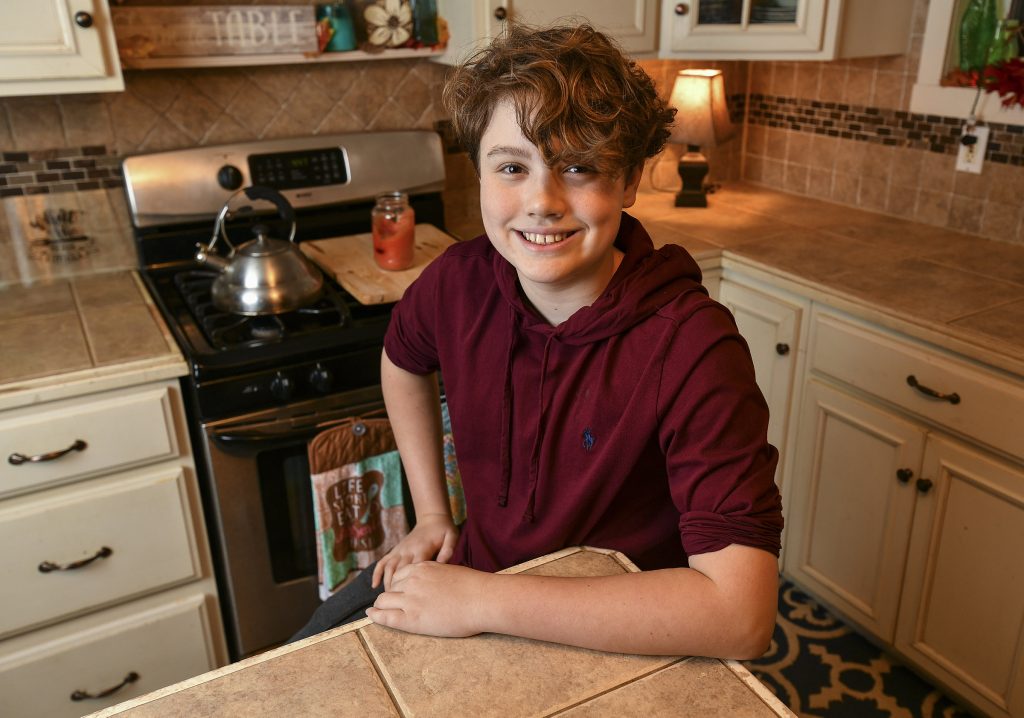 A journey that began in the shadow of tragedy has landed a Covington Twp. seventh-grader in the national spotlight.

Like many 13-year-olds, Kaden Storm loves to watch his favorite TV shows and play video games, and he stays creative by cooking and painting. But the North Pocono Middle School student also has business aspirations with his new project, flavored popcorn company Kaden’s Kernels, and took his cooking abilities to national television on Food Network’s “Chopped Junior.” To find out how he did, watch the episode Tuesday, Dec. 17, at 8 p.m.

Kaden’s cooking journey began in first grade after his stepfather died. The loss was hard on Kaden, and cooking became his coping mechanism as he learned to bake with his grandma. Within the next couple years, he was pushed toward the kitchen again after breaking his arm while playing baseball. Unable to play the sport he loved, he remembered how cooking had helped strengthen him during a difficult time in the past. He decided to once again take up the hobby, this time with renewed determination.

His first solo attempt was grilled steak, which he burnt to a crisp.

“You couldn’t even bite it,” Kaden said, rolling his eyes as he recalled the moment.

But, that didn’t stop him. He surprised his entire family when he served them a dinner of herb-rubbed chicken, which his mom, Kimberly Storm-Ritter, described as “his first big hit.” As the author of two cookbooks, she decided to mentor Kaden, guiding him as he continued to explore his love of cooking.

With the help of his mother, Kaden quickly improved, learning how to make simple, seared dishes with fresh sides and gourmet reduction sauces. He developed his own recipes, such as his Grass-Fed Tri-Tip Steak, Cioppino (shellfish stew), Pan-Seared Scallops, Crispy Garlic Chicken Wings with Celery Salad and his Deconstructed Free-Range Chicken Fajitas. He learned to prepare mouth-watering sides including pan-fried cucumbers, roasted vegetables, asparagus and brussels sprouts.

By the time he was in fourth grade, Kaden had his eyes set on “Chopped Junior,” a cooking competition for young chefs on Food Network. His first audition was met with rejection, but that didn’t stop him from doing what he loved. Two years later, during the spring of sixth grade, he was asked to come back to showcase his skills in the show’s new season.

The next two months were a whirlwind of preparations, phone calls and extensive practice sessions. Kimberly Storm-Ritter staged timed practice challenges for her son in which he had to cook with surprise combinations of ingredients.

“Timing was tricky for him, because he would usually spend up to two hours making dinner,” she said.

Eventually, the time arrived for Kaden to travel to New York City to show the judges what he was made of, and he encountered intense competition. He didn’t notice the cameras while cooking, but he could hear the judges’ voices in the distance.

“There were famous people critiquing me the whole time,” he said, recalling the anxiety it induced. “It was like a faint whisper — so nerve-wracking. They question every move you make.”

Instead of letting the comments psych him out, Kaden tried to focus on what he described as “the sounds of food searing and knives on the cutting board.”

Despite Kaden’s nerves, his mother said, the show’s judges and staff sought to keep the junior chefs comfortable and at ease.

“They’re awesome with kids,” she said. “They’re so welcoming. It was a great experience. It really boosted (Kaden’s) confidence.”

Kimberly Storm-Ritter half-jokingly referred to herself as Kaden’s “momager,” which means she carries out her motherly duties while also keeping a tight watch on the extra excitement going on in her son’s life, including the show but also interviews and Kaden’s Kernels. Having to watch her son from a different room during the competition and not being able to help or guide him was stressful at first, but it allowed her to see her Kaden in a new light.

“I was incredibly proud to watch him be so independent. Till then, I always hovered over him in the kitchen,” she said. “To watch how far he’s come, how composed he was … I was so proud of him. It was unbelievable to watch my little boy do this thing independently.”

She thinks Kaden has matured because of this experience, and Kaden agreed.

“I work well under pressure,” he said.

After this experience, Kaden hopes to one day compete on the adult version of the show, Food Network’s “Chopped.” In the meantime, he will focus on school, cooking and his fledgeling business venture, Kaden’s Kernels. That project grew out of Kaden’s desire to eat flavored popcorn that did not use shake-on seasonings — which never stick to the popcorn, he contended — and involves marinating the popcorn kernels to help the flavor infuse the popcorn. So far, his flavors include Sea Salt and Pepper, Sriracha Soy and Ranch Dressing, and he is in the process of perfecting two more flavors, French Toast and Dill Pickle.

Kaden is not letting go of his tenacity or the confidence he gained from competing on “Chopped Junior.” He hopes to pursue a career in art, perhaps as a graphic designer, but also wants to go to culinary school and become a professional chef.

“Both are gonna happen,” he said.