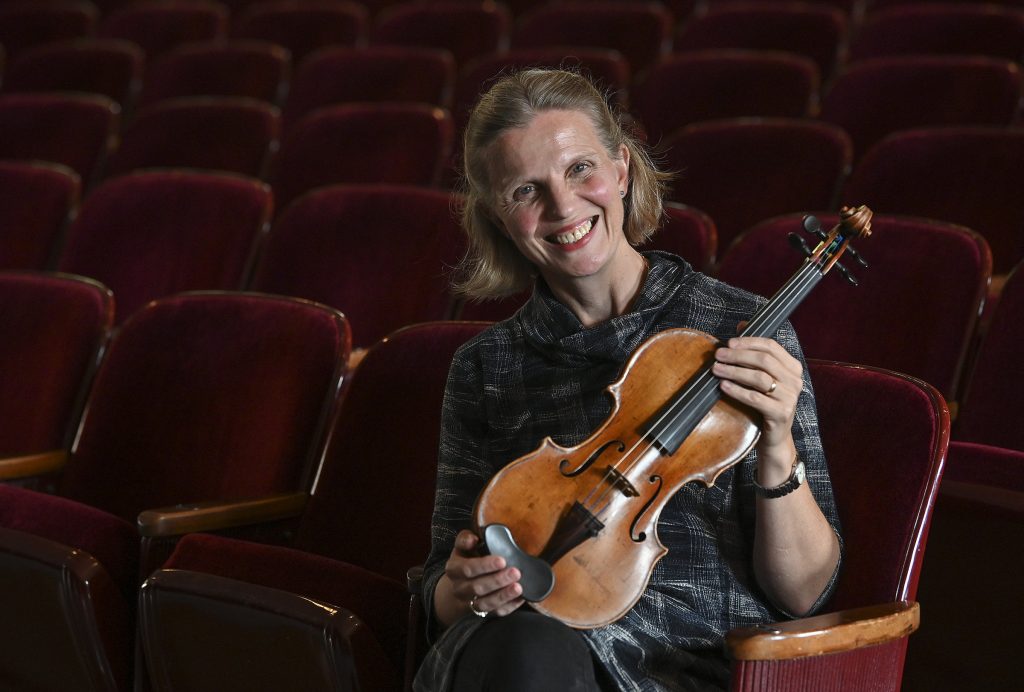 Music allows Sophie Till to reach across continents.

She teaches musicians of all skill levels from all different parts of the world the finer points of string instruments. From Marywood University, where she serves as associate professor of violin, to the children in the university’s String Project to the international musicians she works with on technique and playing-related injuries, Till sees firsthand the effects of music at all stages of life. It’s one of the perks of her job, especially because she has the chance to pass on her love for strings — and the violin in particular.

“The instrument itself can do such spectacular things,” said Till, a dual citizen of the United States and United Kingdom. “The violin can do things nothing else can do and has a sound no other instrument can make. It’s really quite spectacular.”

Growing up in the United Kingdom, music was second-nature to Till. The school she attended was music-focused, and she said from the time the students were about 6, everybody learned to play about three instruments apiece. There also were several orchestras throughout the grade levels. There, she was drawn to the violin.

At 9, Till began to attend a prep program on weekends through London’s Royal Academy of Music, where she became more serious about her craft and began to realize violin and music in general would be her path. She completed her undergraduate studies at the Royal College of Music, Luebeck, Germany, before heading to the United States to attend University of Massachusetts, Amherst, to pursue her master’s degree.

Along the way, Till found herself in Northeast Pennsylvania to teach a music program at Wilkes University and met her husband, Patrick, a musician. The two settled down in the area, and a few years later, she began as an adjunct professor at Marywood. She served as an artist-in-residence at Wyoming Seminary before moving into a full-time faculty position at Marywood in 2007.

“I really enjoy being at Marywood,” said Till, who lives in Watkins Glen, New York, on Seneca Lake with her husband and teenage children. “I feel like it’s been an environment where I’ve been able to grow and have the freedom (to introduce) new ideas and to pursue my own path. I’ve been encouraged to keep it growing and expanding it, and I’m really grateful to do that.”

Till introduced the Marywood String Project — for which she is director — a national program started at University of South Carolina designed to provide affordable string education for children in elementary through high schools. Till noted there’s a lack of string programs in not only Northeast Pennsylvania but also around the country. And the String Project has a dual mission.

“We are here to help those kids that don’t have any access at all and also support the kids who have access in school and support them with whatever they’re learning,” she said.
Across three levels — beginner, intermediate and advanced — local students come to the campus to learn and grow in their craft. The project won the American String Teachers’ Association National String Project of the Year Award in 2010, and Till chairs the National String Project Consortium.

But Till just loves the chance to help young performers.

“Kids are just delightful to work with,” she said. “It’s really great to see the building here at Marywood full of kids playing. They bring so much energy and life and enthusiasm. They really sparkle up the place.”

Another cause close to Till’s heart is working with musicians suffering from playing-related injuries. Her friend, a pianist, incurred a serious injury from playing and began working with Edna Golandsky in New York City, who created the Taubman/Golandsky Approach to correct playing injuries. Curious to see what that was all about, Till went to a lesson with her friend and was fascinated by the process and the way in which Golandsky helped him recover. Till started working with Golandsky to translate the techniques from piano to string instruments in order to help fellow string players with their injuries.

“The data on playing-related injuries amongst professional musicians is shocking,” Till said.

The work she does with string players addresses this at all levels. She teaches professional orchestral players from around the world, typically via Skype, with complex injuries. With young children in String Project, student teachers and undergraduate students, she helps them develop a playing technique that enables them to have long careers without injury.

“If we want to change the statistics in the profession, it is not enough to just help the professionals,” she said. “We have to change our whole pedagogy, which is steeped in problematic traditions, and equip the next generation with the tools for lifelong careers that are sustainable and rewarding.”

Playing injuries also are complicated because they can cause mental anguish for musicians, Till noted, since the instruments are not only their passions but also their livelihoods. When she can help, it’s a remarkable feeling.

“You are changing their lives,” she said. “It’s also saving people’s lives because while it also may be their source of income, you’re helping them to be able to do the thing they love to do. They regain the joy of playing again.”

In addition to being part of the faculty at the Golandsky Institute in New York, Till keeps busy as a string specialist for the Royal Liverpool Philharmonic Orchestra in the United Kingdom, by giving workshops and master classes, and speaking and performing all over the globe. She doesn’t have much time to slow down, she said, but she has the best life she could imagine.

“I’m very lucky to be able to do something that most violinists can’t do, getting to work with these kids as well as college students and professional players all over the world,” Till said. “It’s an amazing thing getting to work with all these different groups of musicians. I love doing it. It’s endlessly fascinating.” 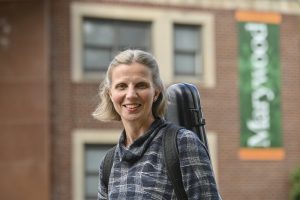 Jason Farmer / Staff Photographer Sophie Till, Marywood University associate professor of violin, sees firsthand the effects of music at all stages of life through her work with students in elementary school through college, as director of the Marywood String Project and through the international musicians she works with on technique and playing-related injuries.

At home: A dual citizen of the United Kingdom and United States, Till lives in Watkins Glen, New York, on Seneca Lake with her husband, two teenage children and plenty of pets.
At work: Associate professor of violin at Marywood University; director of the Marywood String Project; chair of the National String Project Consortium; string specialist for the Royal Liverpool Philharmonic Orchestra, United Kingdom; and a faculty member at the Golandsky Institute, New York
Inspirations: “When you see people doing wonderful, ground-breaking things, whether it be their work in science, music, art, athletics or a social cause such as climate change, it is because they can see the possibilities, sense the potential and have found a way to start moving towards what they see,” she said. “We usually hear about such things late in this process when people have made their science discovery, finished the art, etc., but there was a beginning to that journey and a continuation of it, with all the inevitable ups and downs, false directions and vulnerabilities.”
Aspirations: To avoid playing-related injuries by working with all skill levels of musicians to change the “whole pedagogy, which is steeped in problematic traditions,” and “to equip the next generation with the tools for lifelong careers that are sustainable and rewarding,” she said.
Diversions: Running, swimming and biking (“Perfect thinking time,” she said.)
Quote: “It’s never what we expect it to be — that’s the joy of it all.”