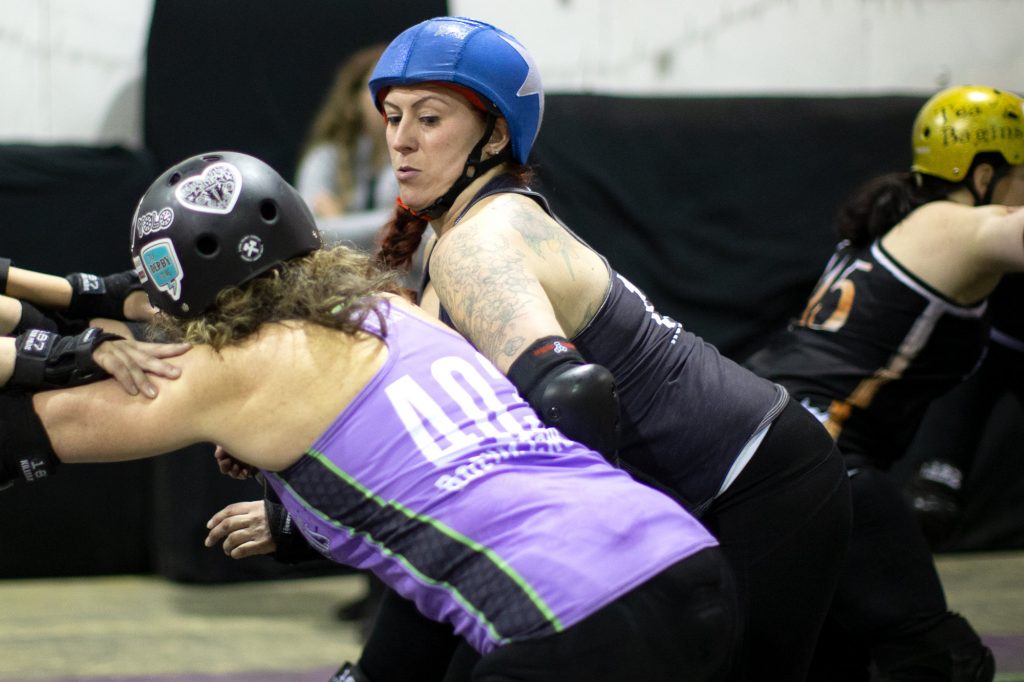 MOOSIC — Amanda Scott had not laced up a pair of roller skates since she was a teenager, but after just a few weeks in the “duck pond” the 32-year-old was skating like a radical.

With the help of trainers, the Plymouth woman refined her skating skills and also learned to throw a mean hit on opponents as a member of the Roller Radicals, a division of the Wilkes-Barre/Scranton Roller Derby League.

Each Tuesday and Thursday, Scott — “Panda 46” as she’s known in derby circles — puts on a helmet, mouthpiece and knee and

Founded in 2009, the league of about 40 members is looking to expand. It will hold an open house at 6 p.m. on Jan. 5 at its track, the Roller Derby Factory, at 4949 Birney Ave., Moosic. In addition to skaters, they’re looking for folks to fill other positions, including timekeepers and referees.

The league consists of women, ages 18 to 58, who come in all shapes, sizes and abilities. Virtually anyone can learn to play derby. No experience is needed, said Lydia “Whipple Shot” Whipple, 28, of Laceyville, a three-year veteran. 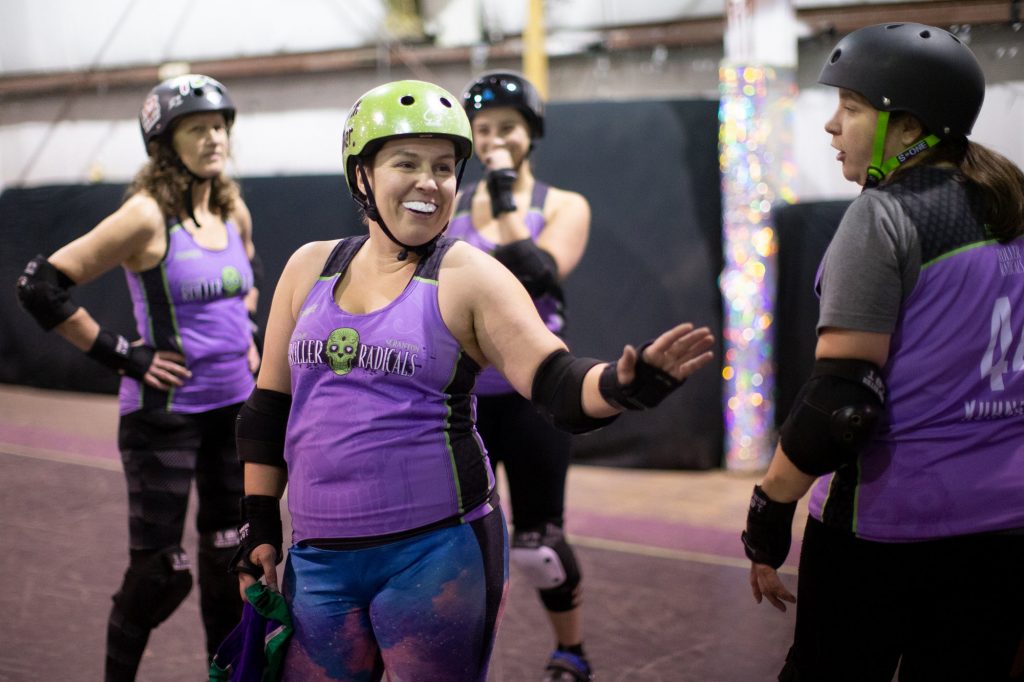 “It takes a lot of time and energy, but if you put those things in, you’ll have an amazing time,” Whipple said. “This is a great opportunity to get out of the house … It’s great exercise and a great bunch of people.”

Scott joined the league about three months ago after a friend convinced her to check it out.

“I’ve always been sporty, but I haven’t done anything in 10 years,” Scott said. “I wanted to get back into something. I came to one practice and I was hooked.”

Roller derby began in the United States in the 1930s and was popular until the 1970s, when interest waned. Recreational leagues made a comeback in the early 2000s, when a group of women in Austin, Texas, started the Texas Rollergirls, according to the Women’s Flat Track Derby Association,the governing body for recreational roller derby.

Whipple and other veterans of the organization hope to transform roller derby’s image, which many people still associate with the highly theatrical and scripted professional bouts that competed on banked tracks in the 1970s.

“It’s not like on TV in the ’70s, where you’re throwing elbows and knocking people over the bar,” said Sarah “Alexander Slamilton” Scinto, 28, of Ashley, a two-year veteran of the team.

The league is among 450 recreational teams in six continents that compete through the WFTDA. As the name implies, the teams play on a flat surface. That’s opened the sport up to many more people since the tracks are far less expensive to build.

A team consists of four blockers and one jammer, whose job is to earn points by passing as many members of the opposing team as possible within two-minute jam sessions. The blockers are tasked with impeding the opposing jammer, as well as clearing a path for their own jammer to pass. Whichever team has the most passes at the end of the 30-minute game, called a bout, wins. 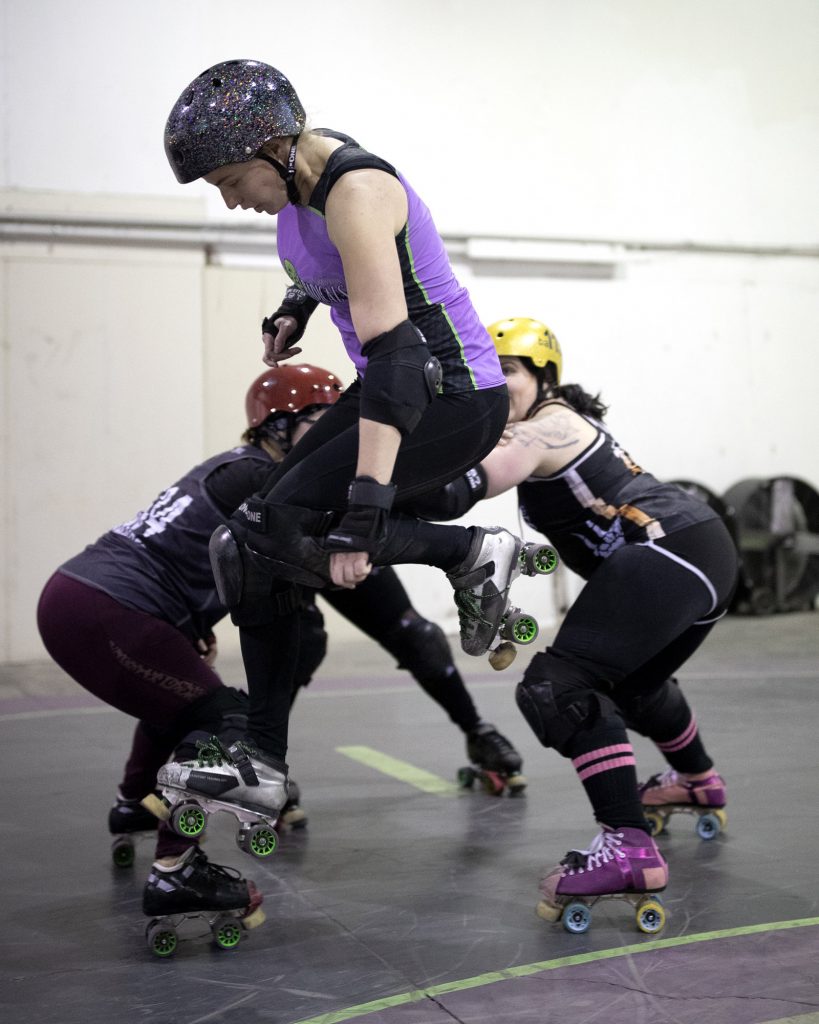 The sport has strict rules to ensure safety. Competitors cannot use their forearms or feet to hit an opponent and cannot strike them in the head. Hits are delivered with the hips and shoulders.

“I’m not going to say you can come to a roller derby game and not see some big hits,” said Brandy Ralston,34, of Wilkes-Barre, another veteran team member. “We are a full contact sport. We all know injuries can happen and do happen.”

To lesson that likelihood, new skaters must first go through a roughly two- to three-month training session — known as the “duck pond” — where they learn the key elements of the sport taught by “momma ducks.”

The league has two teams. The Roller Radicals consists of the more skilled skaters who travel to play other WFTDA teams in the Northeast to earn a worldwide ranking. Less experienced skaters play on The Low Rolling Deuces. They also travel but are not ranked. In addition, the league has two home teams comprised of its own members that play each other at the warehouse.

The sport is open to women age 18 or older. Men cannot compete, but can take part in other areas, such a being a referee, scorekeeper, penalty tracker or timer.