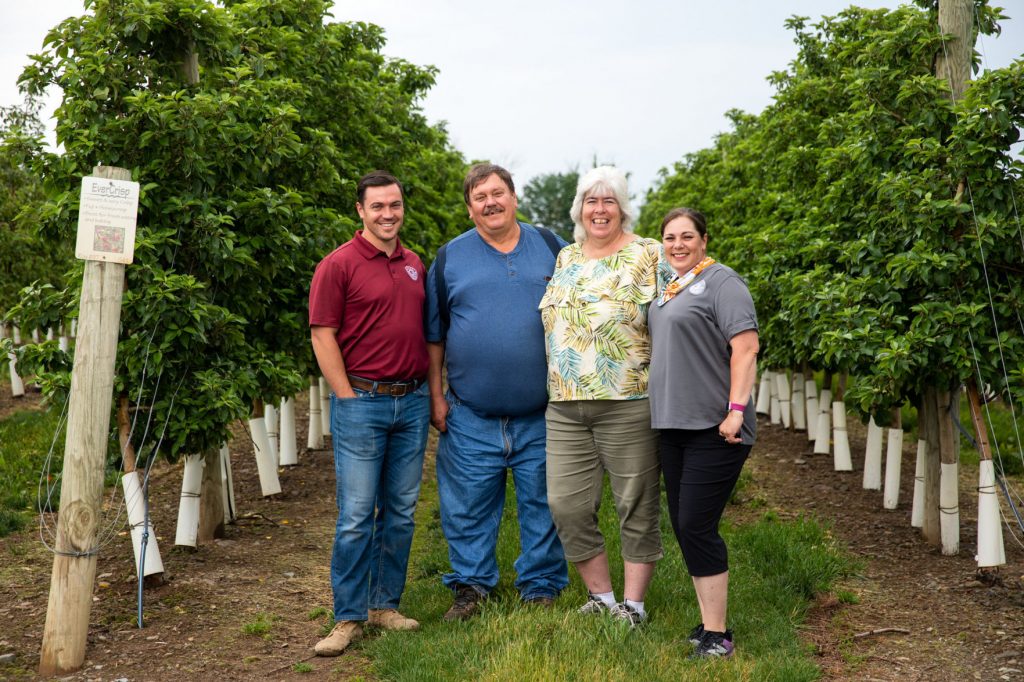 When John Roba planted his first batch of Christmas trees in 1985, he wanted to sell 2,000 trees to set up his family for life.

In the three decades since, John and his family estimate they’ve sold around 200,000 trees, if not more.

“I thought we’d do OK, but I don’t think I ever knew what could come of it,” he said on a recent day on his Scott Twp. farm.

Today, the owners of Roba Family Farms — John; his wife, Sue; and their children, Jenn and Jeff — don’t just sell Christmas trees. Through the years they added pumpkins, apples and other produce alongside fresh-cut flowers and more.

And on top of it all sits the world of ”agritainment” — farm-based entertainment and activities — the Roba family created in Northeast Pennsylvania at its original farm at 230 Decker Road, North Abington Twp., and since then at Lakeland Orchard and Cidery, 1649 Lakeland Drive, Scott Twp. The former houses the Roba Christmas tree farm, pumpkin patch and autumnal activities. The latter spot offers more options for adults, such as a hard cider garden and axe-throwing.

The family’s name has become synonymous with seasonal attractions in the region, and the four members of the family each have a hand in the business’s operations. (The couple’s youngest son, Jake, works seasonally as a manager.) They constantly work to add new attractions and keep things fresh year-round. 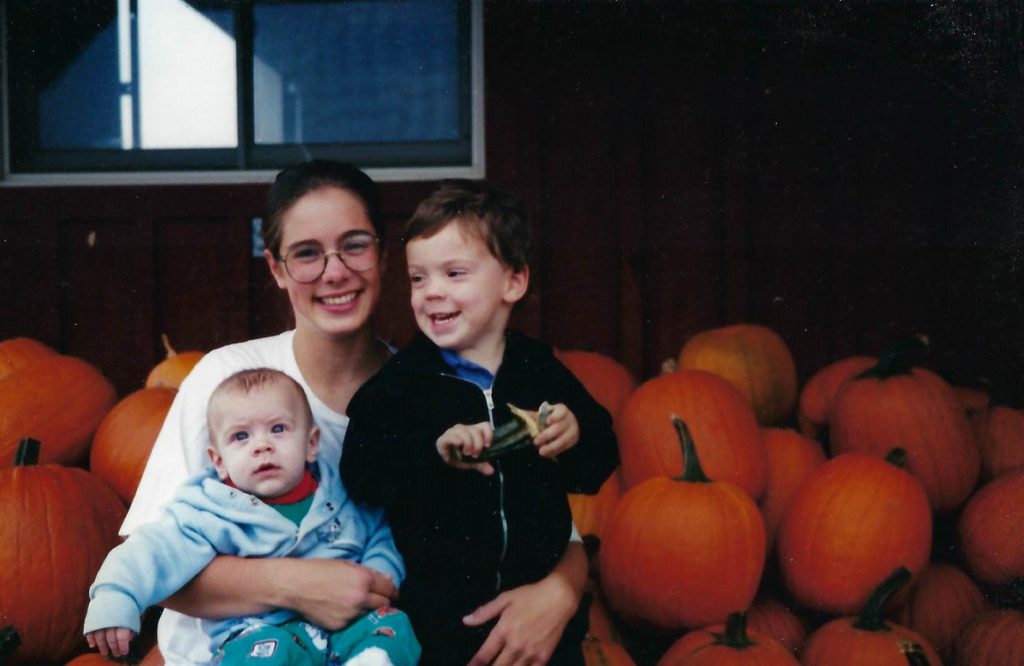 Jenn, Jeff and Jake Roba grew up on the farm, helping out their parents and eventually working there as young teenagers.

It’s a long way away from the dream and a couple dozen Christmas tree seedlings John started with.

“It’s all self-taught,” said Sue, who’s originally from Clarks Summit. “Any time John has wanted to do something, he did it. He taught himself how to grow (Christmas) trees, how to grow pumpkins and apples. It’s all because of him and his belief that we could do this.”

John, who grew up near Elk Mountain, met Sue while she worked at the local Agway store. He had seen her before and asked if he could take her out some night.

“But it had to be a rainy night because his second job was in the haying business,” Sue remembered, adding that he also was a full-time contractor. “I said yes, and as luck would have it, it was a rainy night. The rest is kind of history.”

The couple married and started their family as John began to plan for the future. After working on a Christmas tree farm when he was younger, John had always dreamed of owning his own such farm. In cq1984, he bought cq52 acres of land in North Abington Twp. He began planting Christmas trees the following year, and by 1990, he was ready to sell the first batch. 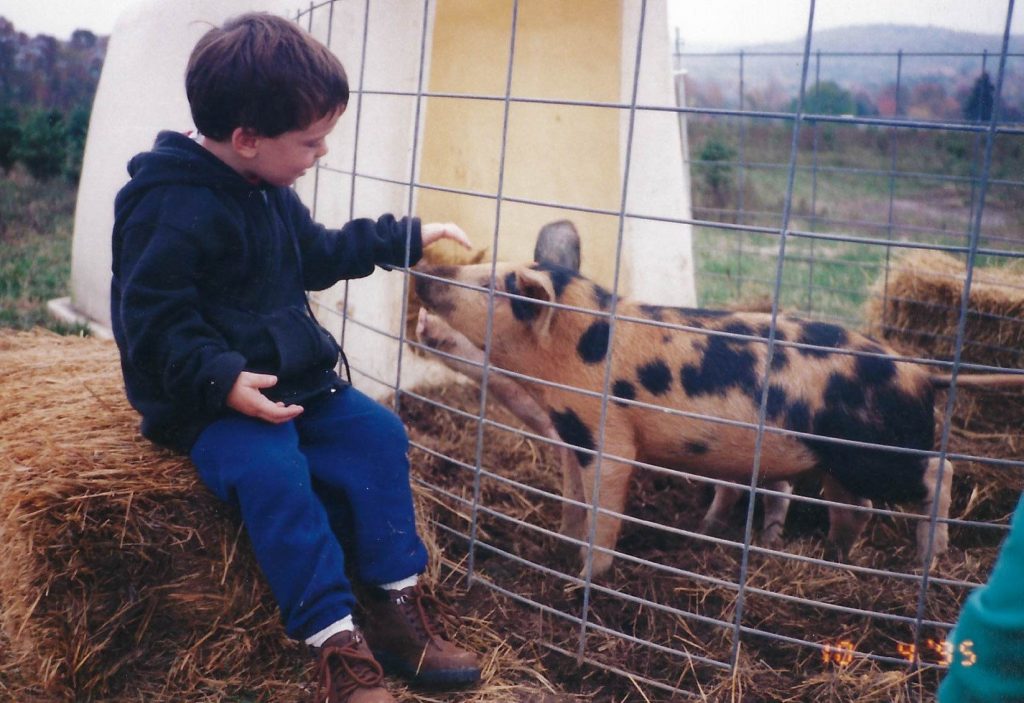 Jeff Roba, visiting the pumpkin patch petting zoo when he was a toddler, began helping out with the family business when he was in elementary school.

Mostly thanks to word of mouth, residents began to visit the Roba farm for their Christmas trees. John had planned to just sell enough trees so he and Sue could retire early, but then he saw more potential for the farm. In 1993, they began selling pumpkins, hoping it would promote Christmas tree sales.

“Again, it started off slow,” John said. “It took us into the early 2000s for it to really take off. … We started with 50-some acres of the 52-acre (farm) all Christmas trees and the rest pumpkins, and now it’s the opposite.” 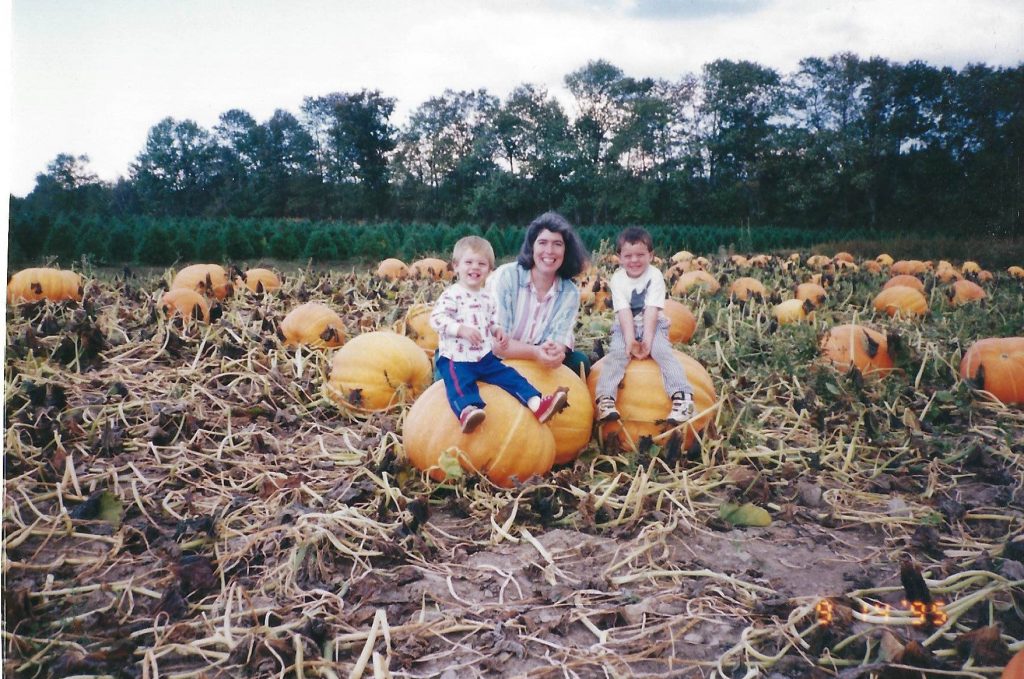 Sue Roba, with her sons Jeff and Jake, play at their family’s pumpkin patch. She said she and her husband always brought their children to work with them on the farm.

The Robas have continued to add more offerings, from food and drink stands and harvest games to rides, attractions and special events.

In 1999, John wanted to expand again, this time to a separate farm, and found the perfect piece of land in Scott Twp. In the beginning, they used the “Lakeland farm” to grow and harvest products they’d then take to the Abingtons location. Along the way, both farms became the Robas’ full-time jobs. Then, John thought they should transform the farm into an apple orchard.

Jenn recalled the humble beginnings of the orchard, which opened in 2013.

“It was me standing at a table with a bag of apples, saying, ‘Does anyone want to buy some apples?’” she said, laughing. “It took a little bit to catch on, but once it did, it was like wildfire.”

The orchard rebranded as Lakeland Orchard and Cidery in 2019 to avoid confusion with its Abingtons counterpart. The family made a conscious decision to add adult-focused features, such as hard cider and live music, to expand its audience. They’ve attended trade shows for years to keep up with trends in agritourism and agritainment and to learn how farms around the world offer them to their guests.

“We’re always kind of looking for what we’re missing and what we could do to make things better,” Jeff said. “It’s constantly changing and evolving to make sure we’re providing guests the best experience.” 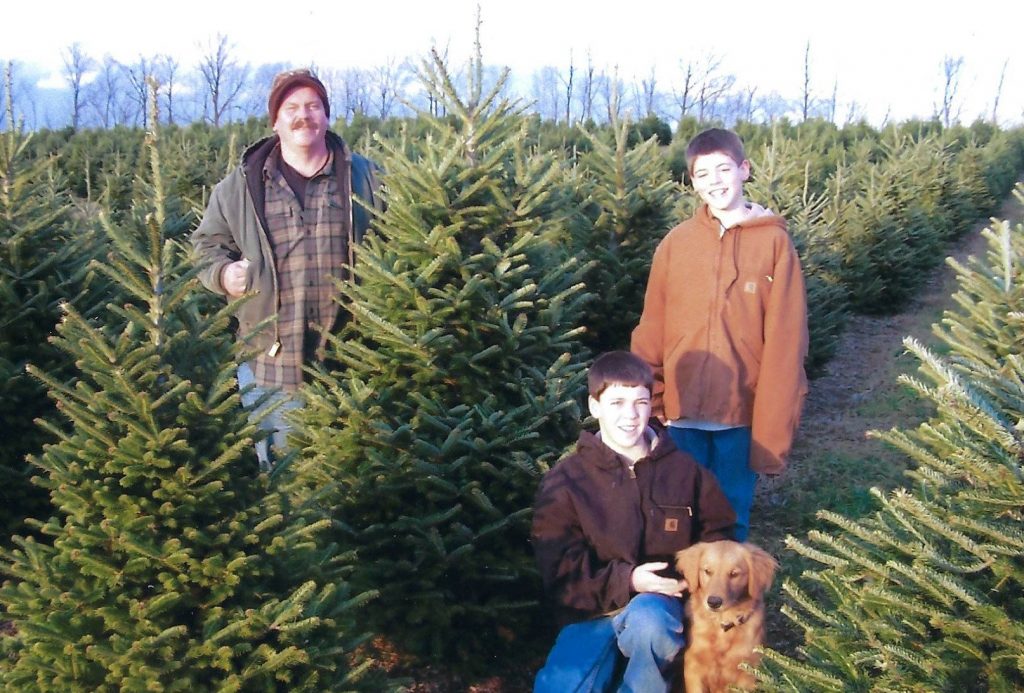 John Roba, with his sons Jeff and Jake, stand in the family’s Christmas tree farm, where the Robas started their business in 1990 when they sold their first batch of Christmas trees.

The Roba kids not only grew up with the business but also contributed to its growth and success. John and Sue never hired baby-sitters for their children — they brought them along to the farm. Their children remember working the registers and doing other tasks, with their responsibilities growing as they did. Eventually, both Jenn and Jeff stepped into management roles.

After earning a master’s degree from Bucknell University, Jeff returned home and started handling the marketing and business side of things. Jenn had worked for the farm on weekends at first (she held a separate full-time job) and then moved into her current position, which includes taking care of the orchard’s day-to-day operations as well as “anything and everything,” she said with a laugh. Even Jenn’s two children, Gabrielle and John, have started helping when they can.

Owning and operating the farms and everything that goes along with them is a huge undertaking, the family agreed. While the Robas said working with family can be challenging, they wouldn’t do it any other way. As most children leave home at 18 or so, Jeff explained, the time they spend with their parents usually stops then. That’s not the case for him and his sister.

“It’s a unique situation to be in to get to spend almost every day with your mom and dad, and I don’t take it for granted,” Jeff said. “Even if there are times that are stressful, we’re so blessed to have this time with our parents.” 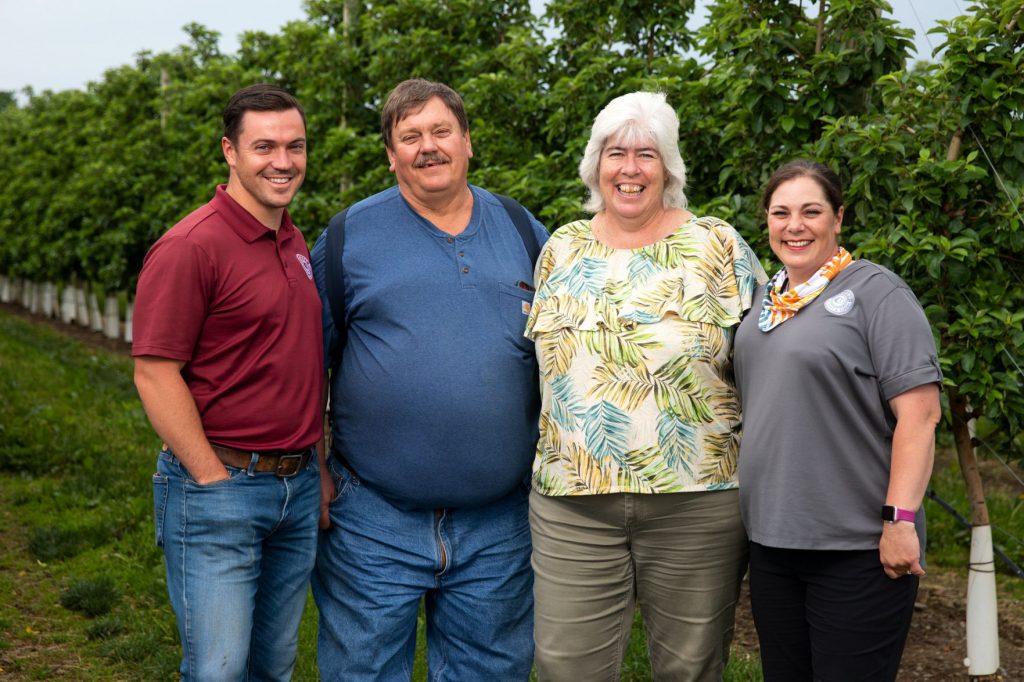 From left: Jeff, John, Sue and Jenn Roba, own Roba Family Farms, N. Abington Twp., and Lakeland Orchard and Cidery, Scott Twp. John and Sue began their family business more than 30 years ago and built it into what it is today. CHRISTOPHER DOLAN / STAFF PHOTOGRAPHER

The Roba family has become part of other families and their traditions, too, as they’ve become close with their guests. They also get to see families grow over the years, like couples who get engaged on the farm and then bring their first child to pick out a pumpkin or the family’s first Christmas tree.

“You’re part of these really special moments in their lives,” Sue said. “We’re just honored to have them share those times with us.”

The family continues to plan for the future, from updating attractions and activities to watching trends to eventually making their own hard cider. John and Sue plan to hand the reins to Jenn and Jeff when they retire. While the family jokes that John can never fully let go of his place on the farm, the couple knows their family business is in good hands. After all, it’s a labor of love.

“We definitely love what we do,” Jeff said. “We wouldn’t be here if we didn’t. It wouldn’t have grown into what it is today without that love.”

Claim to fame: In 1985, John and Sue Roba started a Christmas trees farm. They branched out into growing and selling pumpkins and added attractions, games, food stands and more, making their farm a one-stop shop for agritainment in Northeast Pennsylvania.