From the treacherous caves of Ethiopia to the gritty streets of New York City to the claustrophobic confines of a jeweler’s workspace, “Uncut Gems” fashions an unrelenting thrill ride.

Under the dynamic direction of the Safdie Brothers, the crime drama is filmed like an adrenaline-fueled actioner, constantly ramping up the tension. The anxiety-inducing caper provides a star showcase for funnyman Adam Sandler, who gives one of the best performances of his career.

Sandler dives headfirst into the role of fast-talking, chance-taking jeweler Howard Ratner. The year is 2012, and Howard loves to gamble – to a fault. Pursued by loan sharks, Howard arranges to a have a rare black opal encased in a rock smuggled from Ethiopia to his store in New York City’s Diamond District. The jeweler is hoping to sell the unusual stone at auction for a cool $1 million to pay his debts. But when Boston Celtics basketball player Kevin Garnett becomes infatuated with the gem, all bets are off.

When Howard loses track of the stone, the desperate gambler must outrun the ever-impatient goons looking for their payday. As a man who likes to play the odds, Howard makes more and more high-stakes bets to try and come out ahead, willing to gamble with his own life in the process.

In the follow-up to their critically acclaimed 2017 debut “Good Time,” Josh and Benny Safdie craft a cinematic roller-coaster that keeps moviegoers on the edge of their seats. The camera’s kinetic movements follow Howard through the seedy underbelly of New York City, where danger lurks at a jewelry store, a children’s school play and even a water fountain.

A nighttime sequence where Howard tries to retrieve the rock at a party hosted by R&B singer The Weeknd conveys the urgency of a chase scene. An auction turns into an exciting game of cat-and-mouse. And the climax centers around a crazy bet placed by Howard on the Boston Celtics-Philadelphia 76ers game. Under the Safdies’ capable hands, the gripping sequence switches back and forth between the casino floor, footage of the real-life game and a faceoff with the loan sharks.

The film’s sound design ratchets up the unease. Characters often speak over one other as each tries to gain the upper hand. Daniel Lopatin’s mesmerizing, synthesized score often overlaps the dialogue, forcing moviegoers to pay even more attention to the character interactions. Both techniques fuel a general feeling of discomfort throughout the film.

Sandler’s powerful performance lies at the heart of “Uncut Gems.” The self-destructive Howard is a gambler in all areas of his life, a jerk looking out for his best interests. Sandler conducts a precarious balancing act as Howard tries to juggle his ending marriage to Dinah (Idina Menzel), secret girlfriend Julia (Julia Fox, making a terrific film debut), deteriorating relationship with head loan shark Arno (Eric Bogosian) and the rush to get back his rare opal. But due to Sandler’s infectious charisma, moviegoers can’t help but root for him as Howard makes one frustrating decision after another. Instead of just paying off his debts, Howard ups the ante, addicted to the high of making that next bet. Sandler convincingly portrays an addict in deep denial.

After forgettable fare like his “Grown Ups” franchise and his goofy made-for-Netflix comedies, the excellent Sandler reminds audiences that he can really act. It’s an award-worthy performance that was unfairly snubbed by the Academy Award nominations.

“Uncut Gems” also delivers a surprise in casting Garnett. The directors originally eyed NBA legend Kobe Bryant for the role. But Garnett proves to be the perfect choice. The retired hoops star gives a breakthrough performance as his younger self, who sees the coveted opal as a good luck charm. Garnett doesn’t miss a beat as he holds his own alongside the experienced Sandler. The two play off each other masterfully in a jaw-dropping scene where Howard pressures Garnett right before the big game.

There’s little to knock about “Uncut Gems.” But with its breakneck pace, sometimes the film can feel too intense. At 2 hours, 15 minutes, moviegoers may get to the point where they can’t wait for the film to end, just so the tension eases up.

Once “Uncut Gems” starts rolling, the compelling drama plunges moviegoers into a world of risky bets with the highest of stakes. But the film’s gamble pays off, taking audiences on a wild ride that finally gives Sandler a role deserving of his talents. 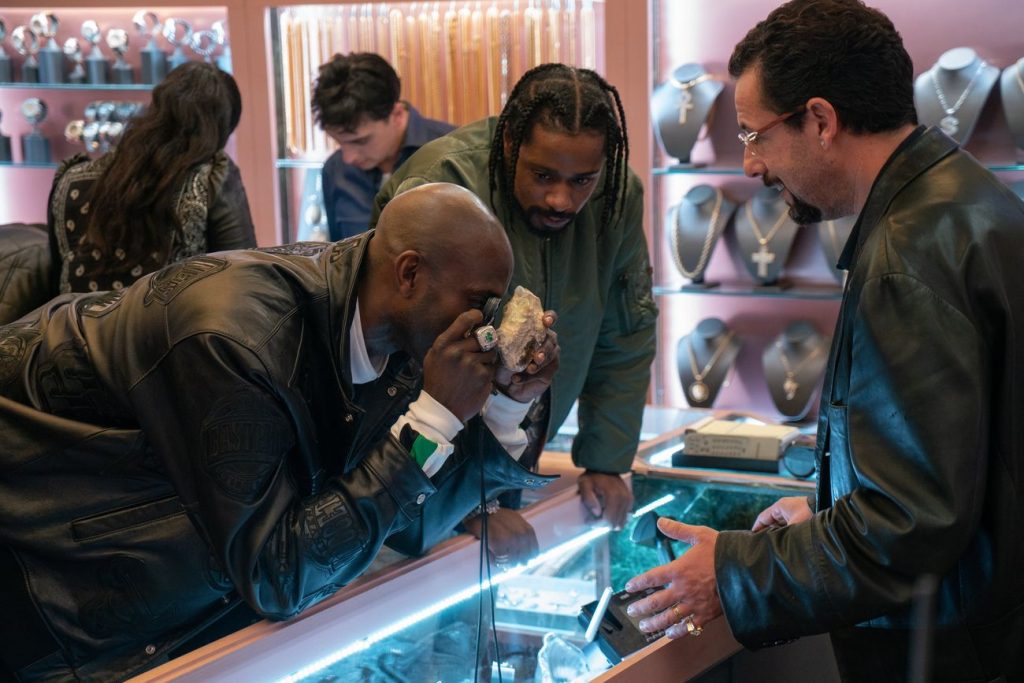 “Uncut Gems” pushes their actors out of their comfort zones, which pays dividends. Obviously known for comedy, Sandler stars as a jeweler and highly-addicted gambler. He serves as the pulse of the film and takes the audience on a roller coaster of events. “Uncut Gems” needs a strong lead in order to work and Sandler is more than happy to fill that role. The film has a rapid pace and he moves perfectly with it. His frantic energy fuels a film built on chaos. The audience spends the entire film simultaneously frustrated by and rooting for Sandler’s character.

Idina Menzel, most famous for voicing Elsa in the “Frozen” franchise and having her name pronounced poorly by John Travolta at the Oscars, plays Sandler’s wife and doesn’t sing once. She’s solid in her role as it’s refreshing to see her doing something different than a musical. Julia Fox, who portrays Sandler’s mistress, is an unknown, but seems like a veteran on the big screen.

Former Celtics star Kevin Garnett has a small role, but plays it perfectly. Of course, he does play himself, but athletes on screen could be a little scary sometimes. Although he’s been retired for years, Garnett still looks like he can play in the NBA, making him an ideal choice for the role.

Nothing new to him, LaKeith Stanfield turns in another great performance as Sandler’s partner. He’s simultaneously a friendly face yet terrifying in the film.

The movie does a fantastic job keeping the audience on the edge of their seats. The film doesn’t have much of an introduction and more so drops the audience in the middle of the movie. It doesn’t take the time to really explain the plot. The audience is just along for the ride. That decision was tough to keep up with at times, but was ultimately necessary to keep the frantic pace.

There are a few long takes that work perfectly as they show the claustrophobia of scenes. That also helps build the tension.

For fans of the NBA, the real footage from 2012’s Eastern Conference semifinals between the Boston Celtics and the Philadelphia 76ers may take a bit away from the film. If the audience remembers the outcome of games, part of the tension is removed. Although, there was plenty left over for me to spend the final 20 minutes of the movie with my hands wrapped around my head. Also, it makes the film cleaner, instead of creating a fake NBA game with a trained actor.

“Uncut Gems” is a roller-coaster ride that never stops until the credits roll. Its frantic pace is matched by its expert filmmaking, and its actors meet the challenge. Sandler shines brightest, but the movie is stacked with talent in unexpected places. “Uncut Gems” sacrifices a traditional movie structure, instead dropping the audience into the middle of a story. That doesn’t always work, but it thrives here because of its frantic pace. Although it fell short of any Oscar nominations, “Uncut Gems” is one of the best films of 2019.

I don’t know if I’d recommend it to gamblers or people with high anxiety. I sure won’t be watching it anytime soon because the tension is a lot to handle. However, audiences can’t deny its quality.