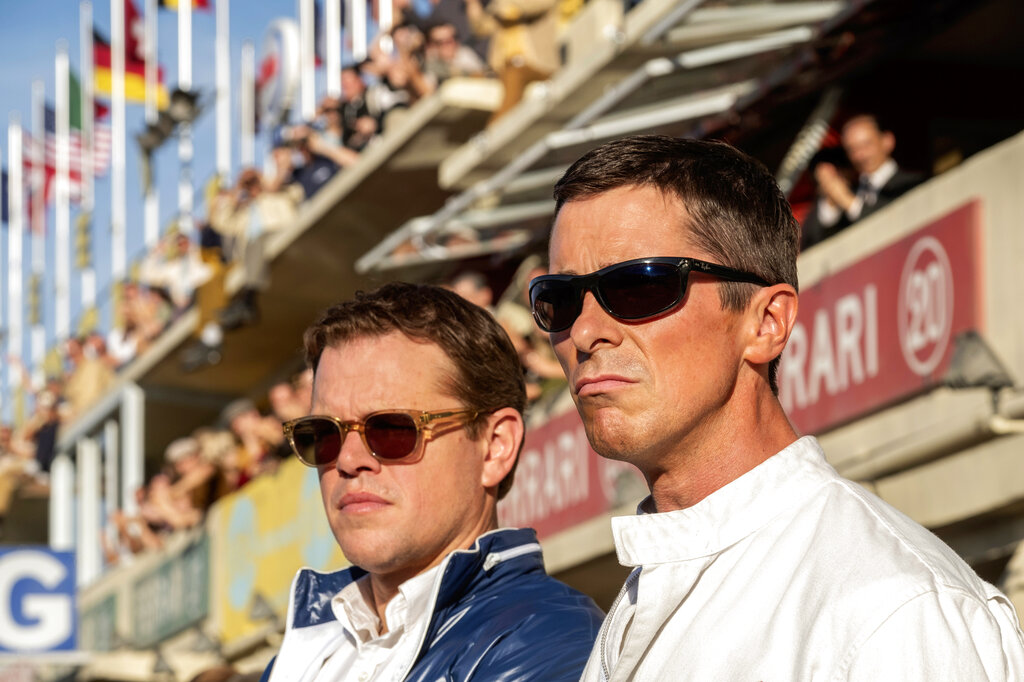 Racing is not just about going fast – it’s a test of endurance. It’s the culmination of a long road of blood, sweat and tears, from the corporate offices to the race shop to the racetrack. When the heart of a racer meets the freedom of the open track, something magical happens – it’s the pinnacle of passion meeting precision.

The exhilarating “Ford v Ferrari” captures the ingenuity, dedication and spirit of competition between the two auto giants in the race to build the fastest racecar. Based on the real-life story of the 1966 24 Hours of Le Mans, the sports drama revs up breathtaking racing sequences, excellent performances and a crowd-pleasing story to put together a nearly perfect lap.

But Shelby and Miles meet resistance from Ford executives, including the high-powered Leo Beebe (Josh Lucas), concerned that Miles’ temper doesn’t fit with the company’s wholesome image. The two friends discover they’re not only locked in battle with Ferrari, but with the corporate suits at Ford itself.

In “Ford v Ferrari,” the polished biopic brings the visceral excitement of the racetrack to the big screen. From the opening scenes, director James Mangold (“Logan” and “Walk the Line”) uses wide shots and banked angles to put the audience inside the racecar. Being that close to the windshield and heading directly into the turns reminded me of the ridealongs I’ve done around Pocono Raceway before the Long Pond track’s NASCAR races. While it brought back good memories for me, moviegoers not familiar with racing can still experience the pure awe of taking a lap around.

Through Mangold’s kinetic direction, the film’s racing segments move briskly, ramping up the tension. The on-track action is consistently clear, whether shot during the day, at night or in the rain. The climactic 24 Hours of Le Mans dominates the final act, and rightly so. The nail-biting, high-octane race vividly recreates the roar of the engines, the passing of cars and the sudden wrecks, putting moviegoers on the edge of their seats.

Named for the on-track battle between the car manufacturers in the 24 Hours of Le Mans, “Ford v Ferrari” focuses more on Ford than Ferrari. The film’s central conflict is the corporate interference that Shelby and Miles face as they work to make their racecar a reality. But this storytelling angle works as the audience roots for Shelby and Miles to succeed on a two-prong level: beat Ferrari and beat the doubting suits.

The heart of “Ford v Ferrari” lies in the friendship between the even-keeled Shelby and the volatile Miles. Both men bond over their passion for racing, which drives their competitive natures. Their partnership unites them against the Ford executives, but it can also pit the two against one other. In one hilarious scene, Shelby and Miles come to blows, demonstrating the extent of their love for the sport.

The film rides on two fantastic lead performances. A startlingly gaunt Bale plays Miles as a determined, resourceful man whose frustrations spur from his passion. In Bale’s capable hands, Miles never becomes a caricature. Instead, as Miles realizes the opportunity before him, the disgruntled racer evolves from a lone wolf into a team player. His family – his feisty wife, Mollie (a wonderful Catriona Balfe from “Outlander”), and his impressionable son, Peter (Noah Jupe) – help keep him grounded.

As the fast-talking Shelby, Damon conveys a strong presence while tapping into the visionary’s vulnerability. Whereas Shelby can’t race anymore, he still relishes being at the track. But now he must rely on Miles’ feedback, trusting his friend’s instincts. Shelby’s devotion to Miles comes through in Damon’s entertaining back-and-forths with the Ford suits, including one funny scene where he takes Henry Ford II on a ride in the racecar.

Where “Ford v Ferrari” loses some gas is in its more dramatic moments. At a run time of 2 hours and 32 minutes, the film feels its length in the non-racing scenes. The movie almost grinds to a halt when the story focuses on the corporate executives. While Letts is a hoot as Henry Ford II, Lucas’ Beebe is a one-note villain with little else to do except take shots at Miles. Bernthal is fine as Iacocca, the legendary executive who died this year, but his role becomes less vital as the film goes on. The film also takes an abrupt turn, which may not give the audience enough time to react.

A celebration of the passion and creativity behind racing, “Ford v Ferrari” runs a victory lap. Fueled by its two stars, underdog story and exciting racing action, the sports flick satisfies the need for speed.

With its trailers and marketing, “Ford v Ferrari” sells a traditional sports movie with acting prowess and an acclaimed director. The underdog story in which the characters face some sort of adversity on the way to victory. A triumph that makes the viewers pump their fists, such as Jimmy Chitwood knocking down the jumper at the buzzer in “Hoosiers,” Rev running a “Fake 23 blast with a backside George reverse” like his life depended upon it in “Remember the Titans” and Roy Hobbs demolishing a home run through the lights in “The Natural.” That’s not “Ford v Ferrari.” Even the title skews the story.

It should be “Carroll Shelby (Matt Damon) and Ken Miles (Christian Bale) vs. Ford vs. Ferrari,” but that doesn’t really roll off the tongue. Whether the marketing and title were intentional or unintentional, be prepared for that. Also, be prepared for a great film.

The 2-hour, 32-minute run time zooms by as Damon, Bale and director James Mangold drive the film to Victory Lane. Damon once again takes on an accent (this time it’s a Southern accent) and makes it sound natural. He’s one of the best in the business when it comes to accents so this is no surprise. It also won’t shock the audience that he nails yet another role. His subtlety is phenomenal in key scenes, just as the viewer would expect from the veteran, Oscar-nominated actor.

Bale has more of the showy role, and he’s more than happy to take it on. Although showy, Bale never overacts. He balances himself very well as he has to play a selfish and angry driver while serving as a good husband and father. Much like Damon there are a few scenes where the audience could just sit back in awe of his acting.

The solid performances don’t stop there as Caitriona Balfe (Miles’ wife Mollie) and Noah Jupe (Miles’ son Peter) shine alongside Bale. While it is not part of the main plot, the Miles family is not a plot device. Balfe plays a strong and supportive wife, while Jupe portrays a smart and loving son. Both are essential to the heart of the film and perfect their supporting roles.

Jon Bernthal (Lee Iacocca) stands out as well. He’s the head of the Ford marketing team and he has to play middle man between Ford and Shelby and Miles. He shows an impressive balance where he wants to keep his job with Ford, but at the same time tries to look out for Shelby and Miles. Bernthal proves pretty relatable as the rational person in between everything.

Ray McKinnon (Phil Remington) is also vital to the film as Damon needs someone to bounce things off when Bale is in the car. McKinnon does a nice job filling that role and steps up during a few emotional scenes.

As seen through all the great performances, the actors obviously had a phenomenal script. The dialogue is great and the subtlety of some scenes prove perfect.

The directing is phenomenal as James Mangold is top-notch. The racing sequences are beautifully shot and intense. The perspective of the racing scenes change. Sometimes the point of view is from the driver’s perspective. Other times the camera rides alongside the cars. The audience stays on the edge of its seat because of the different camera angles. With mostly the same perspective, a 24-hour race could get dull fast. The score does a nice job jumping in at the right time to give the viewer those sports movie moments, but again that’s not the whole film.

It also takes the audience through a lot. It’s funny, sad, intense, fun, triumphant and frustrating. That’s a credit to the movie from top to bottom. It made the viewers invest in their characters.

“Ford v Ferrari” starts with great acting and chemistry between Bale and Damon and strong direction from Mangold, but proves so much more. It has a deep roster of solid performances that play a big factor in the film and make it that much better. It takes the audience through a ray of emotions because its engaging characters. The racing sequences are fast-paced and intense. It is mismarketed slightly, but that doesn’t take away from its greatness. The Academy will no doubt throw a few nominations at “Ford v Ferrari.”