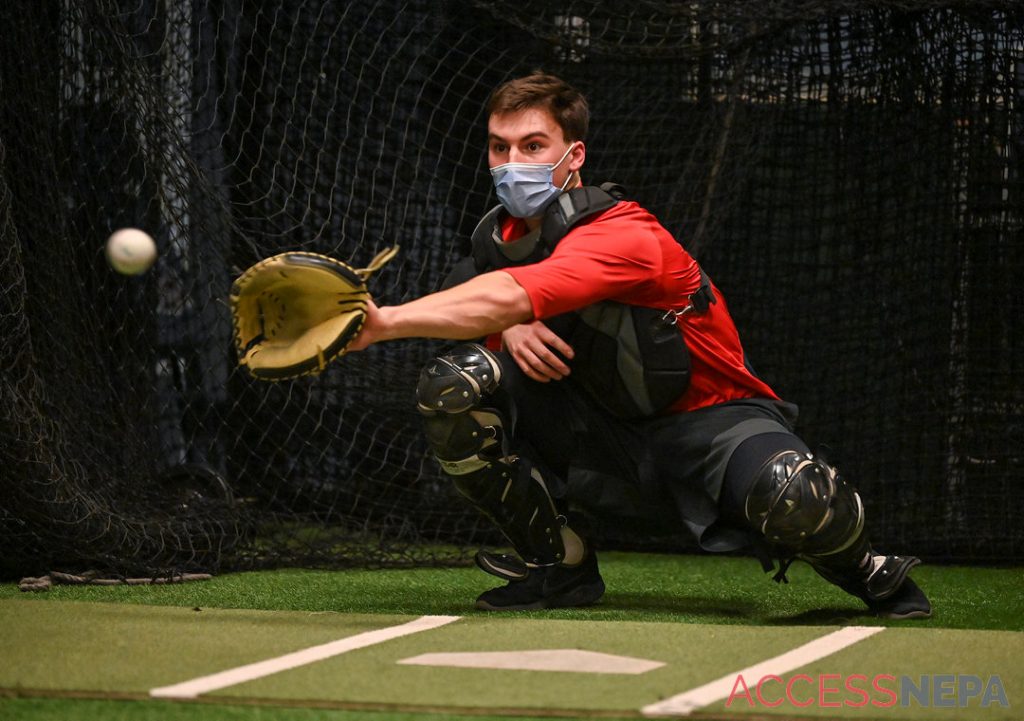 Retzbach improving one bullpen session at a time

First on the mound is Max Kranick. He is getting in one last bullpen session at PNC Field before he heads to spring training in a couple days. The Pittsburgh Pirates prospect is working on keeping his four-seam fastball up in the zone, a vast change from his earlier days in pro ball when down low was the goal.

Mason Black throws next. The Lehigh University ace whose name keeps popping up on Major League Baseball draft watch lists is preparing for a junior season. He’s different than Kranick, his former Valley View teammate, in that his bread-and-butter pitch is a sinking two seamer, and he’s still unpacking his slider from its offseason break.

Once they’re done, a pair of Wyoming Valley Conference alums walk into the visitor’s clubhouse: Ray Black, the Milwaukee Brewers reliever who averaged — averaged — 98.2 mph on his fastball in the bigs in 2019; and Tyler Yankosky, a 6-foot-6 Washington Nationals farmhand who lost his first full season of pro ball to the coronavirus pandemic.

That’s the one constant, actually: the guy in the catcher’s gear.

Adam Retzbach is in demand this time of year. The former Lakeland standout has carved out a role of catching bullpens for some of the best arms the area has to offer. He’s a pretty good prospect, too, snagging the starting job at Lehigh as a freshman last year before the pandemic ended their season. Still, he showed enough over his 13-game debut to put himself on the pro radar ahead of next year’s draft.

“I think that if you want to get better at catching, the best thing you can do is just catch bullpens and work on receiving and blocking there, because it’s as close as you’re going to get to game action,” Retzbach said. “So, I’m pretty happy that I’ve been able to kind of insert myself into all these bullpens and all these lessons and get my work in that way.”

Last spring’s coronavirus shutdown hit at an inopportune time, as Retzbach was on a Patriot League rookie-of-the-year kind of pace. He hit safely in all but two games, cracked two home runs Feb. 23 against Richmond and had a 4-for-8 outburst March 6 against North Carolina A&T. He led Lehigh with a .296 batting average and an .848 OPS, and was second in slugging percentage at .481. He also threw out five of the six who tried to swipe a base against him.

“You can see just from Day 1, there was a level of comfort there that you don’t see with a lot of freshmen,” said Mason Black, who did his part to recruit Retzbach to Lehigh. “Obviously, everyone goes through their couple growing pains, I guess, the first couple games. But Adam got over that real quick and then was able to really settle in. … And then bang we get shut down. So, it’s unfortunate we didn’t get to see what would come of that freshman season for him.”

Retzbach got back on a diamond in the Baseball U PA Collegiate Summer League and kept working on the side with Kranick and Mason Black. Those weren’t easy sessions. The pitchers were in midseason form and worked off a homemade mound in Kranick’s backyard, the sun sometimes setting behind them and surrounding trees casting shadows all over. Kranick saw progress.

“From the beginning of quarantine to now, it’s like night and day,” Kranick said. “His hands, his setup, his stance, everything — it’s really night and day. It’s really cool to see how much better he’s gotten over this time.” 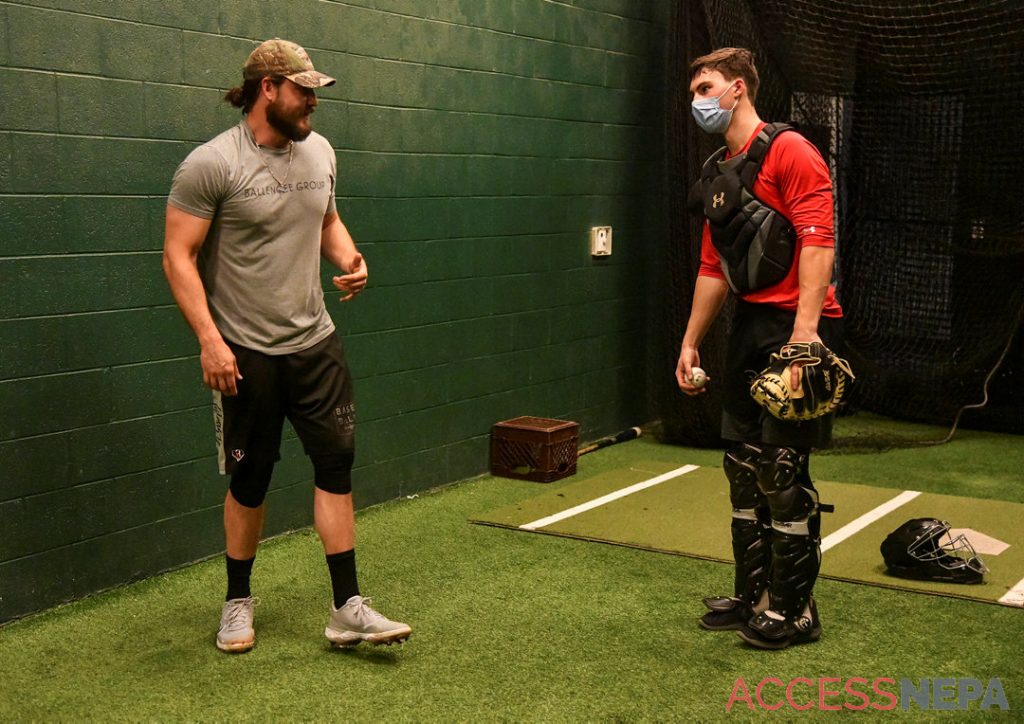 Retzbach, 20, tries to do something baseball related every day, whether it’s hitting at Baseball U PA or working out at NEPA Fit Club. He grew up going to catching sessions with Mike Guy at Baseball U, where he said he learned to be tough backstop and a “good servant” for his pitchers. At Lehigh, pitching coach Sean Buchanan helped take him to the next level by starting to refine his defense while also learning to work up profiles on his pitchers — knowing what they throw, what they throw best and when and where they like to throw it. He watches video of guys in the majors, and though he lists Philadelphia Phillies cornerstone Carlos Ruiz as his favorite player, the mechanics that worked for the 5-foot-10 Ruiz don’t necessarily translate to the 6-foot-4 Retzbach. Instead, a guy like the Kansas City Royals’ 6-foot-3, five-time Gold Glover Salvador Pérez is a better study.

“Looking at the catching now in the MLB, you have to be a good receiver, and all of those guys are so incredible at what they do,” Retzbach said. “So, I think you can really look at anyone and take things from everyone in the league.”

That’s what he’s focused on now: receiving. He’s trying to work up through the ball, rather than dunking it out of the zone; letting it travel and getting more consistent pockets on it. Catching a wide array of pitchers can help him with that, as the ball looks different and travels differently out of Ray Black’s hand than it does Mason Black’s, or Kranick versus Yankosky.

“You try to give him a little bit of a heads up,” Ray Black said. “’This is what I throw. This is what’s going to happen. It’s early in the year, just stay center cut on the plate, we’re not going to be working in and out.’ That gives him an idea, too, like, ‘Hey, be ready back there. It may not go exactly where I want it to.’ “

This particular day is the second time he and Retzbach worked together. For someone who harnesses as much velocity as the 30-year-old Coughlin grad, having a catcher who can take the heat is a luxury.

“A few years ago, I had my old high school catcher, who’s one of my good friends still to this day, come up in work boots and Carhart pants and try to catch a bullpen and it didn’t go well for either of us,” Ray Black laughed. “So, when you get somebody who can come up here, volunteer their time — he’s getting his work in, we’re getting our work in. The more we throw together, we’ll be able to build a rapport where’s he’s going to be able to identify different things like spin and carry on our ball. It makes a huge difference, obviously, for us.” 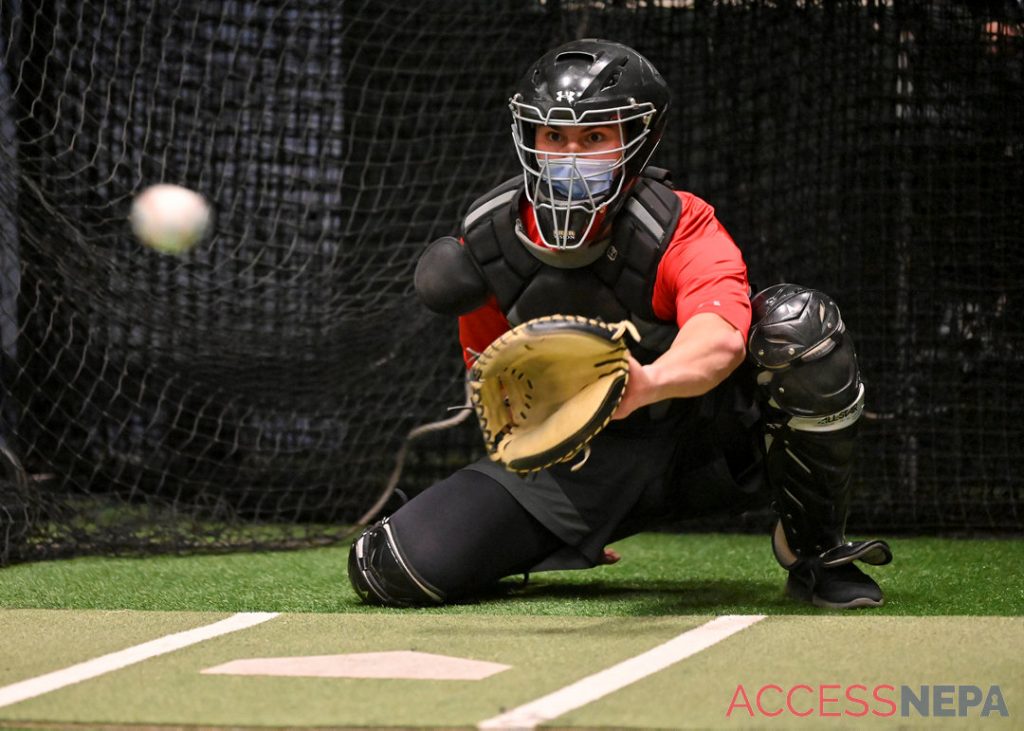 Maybe, someday, Retzbach can reach the level Ray Black is at. Professional baseball runs in the family — his first cousin Phil Gosselin has played parts of eight seasons in the bigs, including 39 games with the Phillies last year — and last week, D1Baseball.com dubbed Retzbach the Patriot League’s No. 1 MLB draft prospect for the class of 2022.

“I think he’s going to have a chance to play at a professional level, sometime within the next couple years,” Kranick said. “He definitely looks the part back there. Obviously, being a (6-4) catcher, everyone knows he can hit. He’s got a ton of power. I think that has a ton of value in today’s game.”

If pro ball is in his future, that’s exactly where Retzbach wants to keep it right now. His first priority is the Patriot League championship, and Retzbach knows Lehigh has the talent to make that happen. While there’s no schedule in place yet, the Mountain Hawks expect to get going within the next few weeks.

“I think right now, I’m just kind of focused on getting as good as I can and just getting better as much as I can, working with my coaches,” Retzbach said. “The goal for now is to win the Patriot League and whatever happens after that is — at the end of the day, I just have to keep working. Working with guys like Max, who’s already there, and Mason, who’s probably going to be there soon, it kind of helps me get to that, where I want to be.”