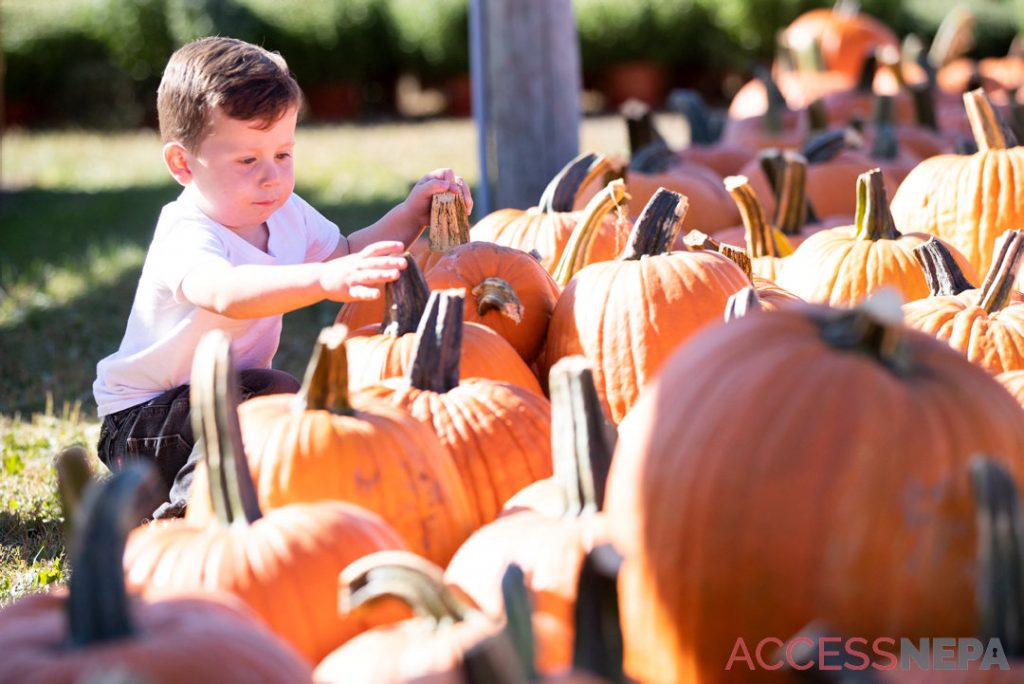 NORTH ABINGTON TWP. — During the pandemic shutdown, the Roba family wasn’t sure their namesake Roba Family Farms would open for the make-or-break fall season.

So, they planted vegetables at their Lakeland Orchard & Cidery 9 miles away in Scott Twp. to at least have produce to sell.

“When this (pandemic) all started in March, we sat together as a family and said what can we do if for some reason we can’t open our door,” said family matriarch Sue Roba. “That was our main concern, so that we can continue in business so we can survive.”

It turned out the state’s green phase of COVID-19 reopenings meant Roba Family Farms at 230 Decker Road in North Abington Twp. — one of the region’s largest and best-known seasonal attractions — could resume after all. It opened this weekend on schedule.

With picture perfect weather Saturday, large crowds came out to soak in all of the farmy fun.

Lea Christopher of Kingston and her 4-year-old son, Landon Birk, enjoyed their outing Saturday at Roba’s. Landon’s favorite attraction was “the piggies” — pink piglets rooting around in a pen. Christopher, 26, recalled enjoying annual visits to Roba’s on school field trips during childhood.

“We come here every year,” Christopher said. “I’ve been coming since I was little. Now, I’m just passing it on” to Landon.

But a lack of school groups this fall because of the pandemic prompted Roba’s to open only four days a week instead of the usual six.

For social distancing, tickets are sold in advance with timed entrances to limit capacity, and seating and lines have been reconfigured for spacing. Staff members must pass a health check prior to each shift.

Meanwhile, adding produce at the orchard at 1649 Lakeland Drive in Scott Twp. produced a bounty. The orchard opened Aug. 1 and on Friday started a Halloween light show attraction.

“We put in 6 to 10 acres of produce — potatoes, sweet corn, every vegetable you can think of — because we wanted to be pretty much secure that we could open our doors, being essential, agriculture, to get the people in,” she said.

Roba Family Farms added an “Apple Cooler” refrigerated room inside the retail store to sell apples and cider from the orchard.

What began decades ago as a Christmas tree farm and pumpkin patch started by Sue’s husband, John Roba, has grown into a large-scale harvest hoedown park.

The couple’s three children also work at the farm. Jennifer and Jeffrey work full time, while Jake, who has a career in Philadelphia, works seasonally part time on weekends. Sue’s siblings also help out and the operation has numerous employees.

“We love it. I never dreamed it would be this big,” she said. “As John and I always say, when you love it as much as we do, it’s not really like going to work every day.”