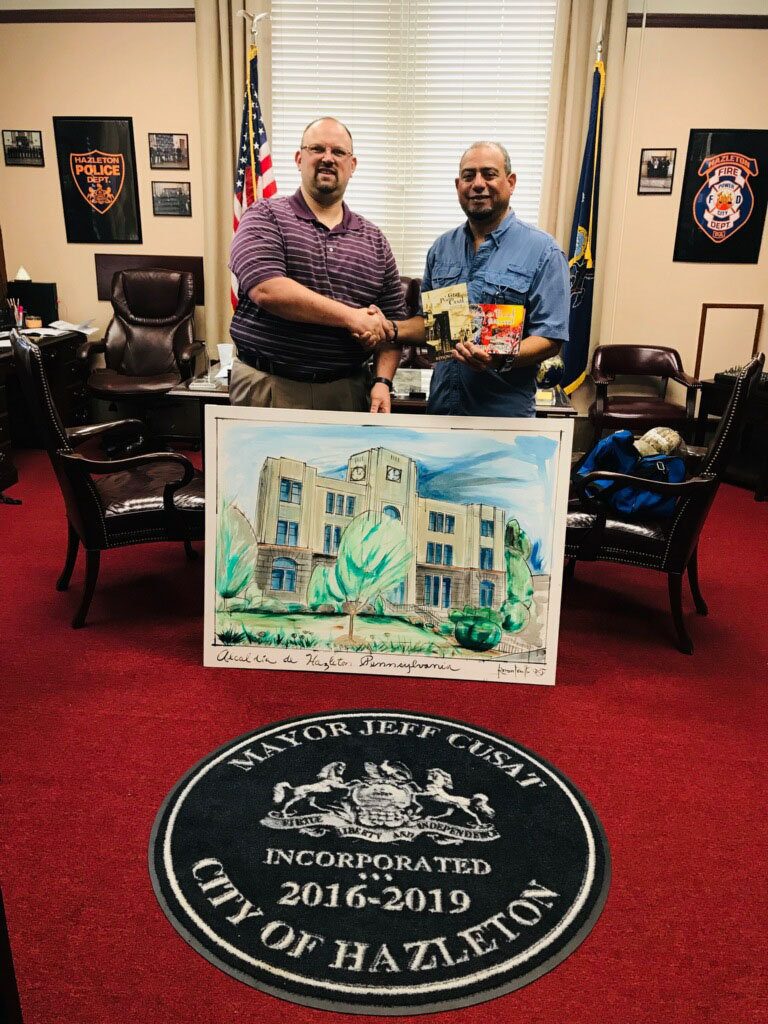 Reyson Peralta found so many similarities between Hazleton and his hometown of Jarabacoa in the Dominican Republic that he went to sleep in one town and dreamed of the other.

Peralta wrote the poem about Hazleton while in Jarabacoa, but he illustrates his book with paintings of Hazleton made while living in the city in 2015.

During his recent visit, Peralta donated his painting of City Hall to Hazleton Mayor Jeff Cusat.

In illustrations for the book, however, he reduces City Hall’s blue sky, green lawn and trees to sepia tones, as he does with other illustrations on the pages: A view of Broad Street looking east from the Presbyterian Church steeple, the Romanesque temple of Security Savings Bank and the wrought iron railing on a porch of a patron who housed him.

The drab prints subdue the mood of the poem, in keeping with the title’s color. 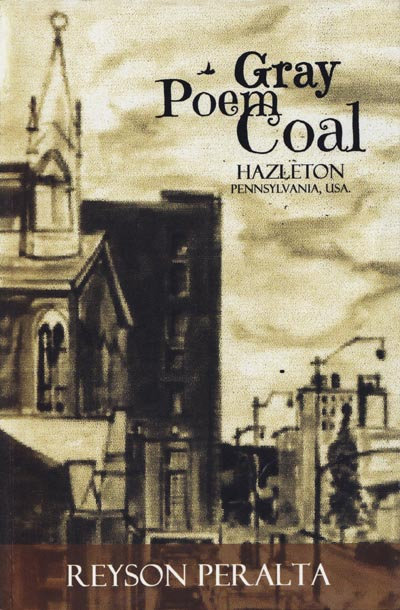 That simple question got him talking for several minutes before Amilcar Arroyo, editor of the Spanish newspaper El Mensajero, translated.

Gray reflects winter, which Peralta calls implacable, the suffering of miners as they worked underground, the economy when the mines closed but also the lives of new migrants, many from his native country, doing new jobs in a place that isn’t home.

Moreover, Peralta walked by churches with their graveyards and concluded that gray remains, as he writes: “The living hands of the city appear dead in the petrified cemeteries from the cold marble of oblivion …”

In contrast, his other book, “Carne a Baal,” a poem about the month-long carnival in La Vega, a city close to Jarabacoa, bursts with color in his photographs of carnival masks that feature sharp teeth, bulging eyes and vivid yellows, pinks, greens and oranges.

Even his gray poem about Hazleton acquires color, he says, as if brushed by a student artist learning the palette.

“Oranges, yellows, reds, purples, green/the leaves fall,” Peralta writes at the poem’s start. Later he describes a cascade of yellow flowers dropped by an indigenous, Dominican tree and elsewhere notes, “The city is reborn like the flowers/eternities of tears/It leaves me trembling and often changes/my heart’s season.”

Neither city is far from his dreams.

“I awaken to see a new dawning of both to deepen my love and respect for all their history and beauty that salutes us in their surprising quietude,” he writes in an introduction. “I declare my ‘Poem Gray Coal,’ written in Jarabacoa for the City of Hazleton.”

Where to find Peralta’s book, paintings

Poet, artist, photographer and architect Reyson Peralta donated copies of his book, in English and Spanish, to Hazleton Area Public Library. Some of his paintings are on display in the Downtown Business Exchange, 100 W. Broad St., through interior windows of the office of Drs. Christian and Orisa Santana. Other paintings are for sale, along with his book, which is $10 a copy. To purchase, stop by El Mensajero, Room 107 in the Downtown Business Exchange.