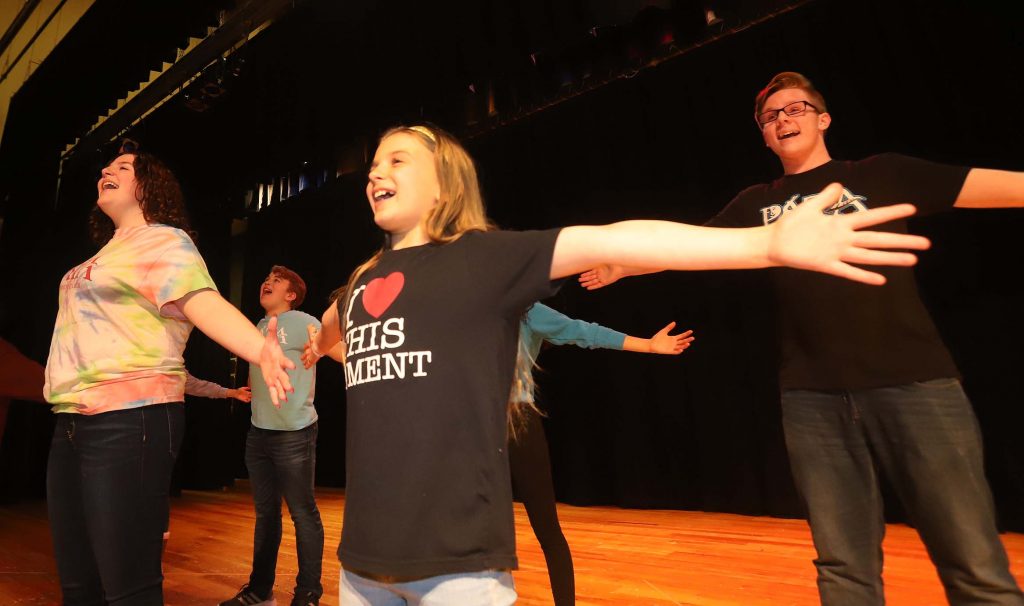 Program mixes performance, science to give youth a strong start

The nonprofit provides young performers around the region with voice, dance and drama training. While plenty of youth theaters and performing arts programs exist throughout Northeast Pennsylvania, PATA is different: it brings together theater and performance with key principles of anatomy and physiology.

The brainchild of Dr. Cari Tellis, a speech-language pathologist and Misericordia University professor — and with the help of colleagues, friends and family — PATAsphere seeks to teach students 7 to 18 not only the art of live performance but also the science behind it. It’s all done in a supporting, accepting and engaging environment where students are free to be themselves.

“This is a safe environment in every sense of the word,” Tellis said. “It’s a place where students will learn to sing and dance without injury, and it’s a place for students to feel comfortable being themselves in their own skin.”

The primary objective is to promote vocal health and awareness and provide a basic knowledge of physical movement to students while they’re young. This helps to decrease the risk of vocal and physical injury that can come from incorrectly speaking, singing and dancing.

This goes hand-in-hand with Tellis’ approach to voice training as one of only 25 certified master teachers and course instructors in the Estill Voice Training System. Founded by singer-turned-vocal researcher Jo Estill, this method enables the singer to identify and control individual structures of the voice in isolation by using everyday sounds that are common to everyone. This allows the students to sing different types of genres — pop, rock, classical — not because they have to but depending on how they decide to use their voice, Tellis said.

“It’s an awareness of what’s happening in their body and, that way, they have complete control over it,” said Tellis, who has done groundbreaking research on the method. “That control leads to confidence.”

This bridge between science and art, as well as her own children — Sydney, now 17; Sophia, now 13; and Luke, now 10 — inspired Tellis to create a PATAsphere. A classically trained singer, voice scientist and therapist, Tellis has nearly 20 years of experience working with professional speakers and performers, and has authored books on the subject. In 2014, Tellis approached her speech-language pathology student and now PATA assistant director, Tia Spagnuolo, about starting a summer arts program for kids using the science behind voice, acting and dance. The program started with 36 children and grew each year since.

PATAsphere is open to all levels of performers as well as children from all socioeconomic backgrounds; those with attention deficit and hyperactivity disorder, central auditory processing disorder, or autism spectrum disorder; and members of the LGBTQ+ community. As long as the students are willing to learn and be respectful and kind, they have a place at PATA.

“At the heart of it is kindness, acceptance and love,” Spagnuolo said. “I said to Cari, ‘I am not a camp counselor,’ but now I learned it’s so much more than that. These kids have my heart.”

Today, PATA offers year-round classes, including some for adults, and a summer program, all of which take place at Dallas Middle School. PATA Summer is a three-week institute where students learn the basics of singing, acting and dancing as well as the additional skills one sharpens through performing, including self-esteem, confidence and teamwork.

The program culminates in a performance for the public, but one shouldn’t show up to the PATA show and expect to see old standards from the Great White Way. The original show’s book and lyrics are written by Tellis’ father, Orlando R. “Lonnie” Barone, and the music is composed by a team of professional musicians from around the country, including Katharine McElroy Manasco, Ryan Burdick and Noah Sunday-Lefkowitz. In addition to big belts and softer singing that showcase the students’ vocal control, the stories themselves have deeper thematic elements. “In Search of Marjee,” the musical from one of the program’s summer programs, centers on the disappearance of a young girl and her town’s search to find her. Its music and lyrics sound closer to Broadway’s “Dear Evan Hansen” — a coming of age story about mental health, suicide and self-acceptance — than it does to children’s theater classic “Annie.”

The group also performs around the region, including in the last few Scranton Fringe Festivals, where they hold their own against professional performers and seasoned veterans.

“I’m not just saying this because they’re our kids, but it doesn’t sound like what you expect from young adult theater,” Tellis said. “People will come to see them, and they’re blown away.”

In addition to Tellis, the coaches and staff at PATA all come from backgrounds of performing arts, science or both. They include speech-language pathologists, like Spagnuolo, and physical therapists as well as composers, dancers, musicians, actors and a former NFL cheerleader.

The staff and coaches serve as living proof that one can have a fulfilling life that may directly or indirectly include the arts. Both Tellis and Spagnuolo understand not every kid who participates in the performing arts will pursue a career in that field. However, many may choose jobs in which the voice and solid communication skills are essential, such as teachers, lawyers and doctors.

For some, performing is not just part of life but also their identities. A singer in PATA’s adult voice class lost the ability to speak and sing after a medical procedure. After weeks of classes, the student has started to regain part of the voice with the goal of participating in a choir once again. Some adult students come from PATA Rehabilitation Specialists, Tellis’ private voice center and up-and-coming speech and language clinic, which offers comprehensive speech-language pathology services to help everyone from those with voice disorders to singers.

“Your voice is so personal to you, and we’re here to work with you to get that back,” Tellis said. “By working with the students from a young age, we’re hoping they don’t need to re-learn after an injury. They’re doing it safely and correctly from the beginning.”

The friendships among the students make for the most rewarding experience. This year’s seniors at PATA have participated since elementary school, and some of the younger students joined in kindergarten. While many kids don’t attend the same schools, through the program they’ve made lifelong friends who share interests and work toward the same goal.

“When they’re up on that stage, it’s incredible, but it’s when they’re all learning together and being there for each other, that’s when it’s magic,” Tellis said.

For more information, visit gopata.org or visit PATAsphere on Facebook.

‘I Love This Moment’

On Tuesday, March 24, PATAspehere released a video on its Facebook page of “I Love This Moment,” a song from its original musical “Just A Penny,” to brighten up social media feeds amid fears of the coronavirus. Students, coaches and staff each recorded themselves singing the song in quarantine, which was edited together to create the full cast version.

I LOVE THIS MOMENT

With so much uncertainty in the world right now, we're reminded that every moment is precious. Do what you love with the people you love. We love this moment. ❤️'I LOVE THIS MOMENT' FROM THE ALL-ORIGINAL MUSICAL "JUST A PENNY". Watch "Just A Penny" at the Social Distant-Scene Theatre here: https://www.eventbrite.com/e/just-a-penny-tickets-100171716300© 2017 Performing Arts Training Academy. All rights reserved. 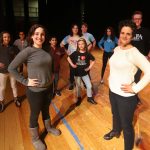 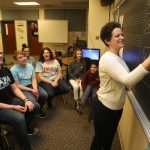 A classically trained singer, Tellis also is a college professor and voice scientist and therapist with nearly 20 years of experience working with professional speakers and performers. She sought to create a safe, engaging space for young performers from the perspective of physiology and science, merged with the artistry of speaking and singing. DAVE SCHERBENCO/STAFF PHOTOGRAPHER 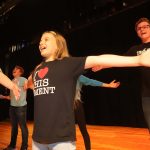 Students of PATAsphere including Gabrielle Gattuso, 16; Julia Chessman, 9; Ben Sevenski, 13; and Jake Thomas, 17, not only learn the principles of performing but also life lessons such as teamwork, self-confidence and communication skills. DAVE SCHERBENCO/STAFF PHOTOGRAPHER