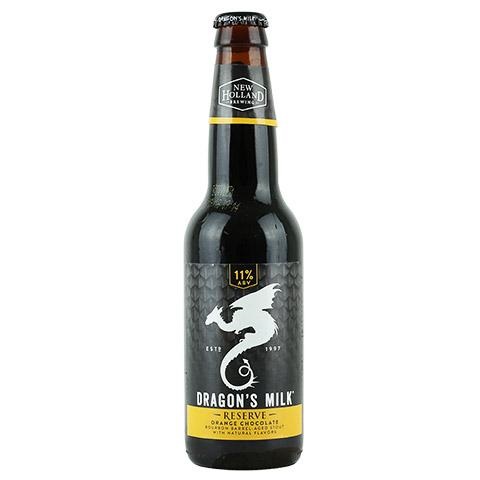 Remember earlier this year when I drank Dragon’s Milk? No, this isn’t some heavy metal drug fantasy brought on by leaving shrimp on the counter too long — it’s the name of a beer. This brew in particular was an 11% ABV imperial stout that I fell in love with. It was bold, sweet and boozy.

This week, I’m back on the dragon. Apparently, Dragon’s Milk was just the beginning. New Holland Brewing has a line based on that delicious brew. Aside from the Dragon’s Milk White (what even is a white stout, and why haven’t I had one?), it has released multiple reserve beers available only in a limited quantity. When they’re gone, they’re gone.

New Holland has done this every year since 2015, and I just now found out about it. It’s time to make up for lost time, and I’m going to do that by starting with its Orange Chocolate.

The Dragon’s Milk Reserve — Orange Chocolate hit the shelves in 2018, so this bottle has been aging for a little bit. I managed to find one on the shelves in a dusty corner. The clerk actually looked surprised to see it and promised me he was taking the other four pack of it home with him. When the person working at the beer store gets excited, it’s generally a good indicator that you grabbed a good brew.

As much as I loved the original, I was pretty excited about this. The pour was a dark stouty color. It looked nice and thick as it slid into the glass. The brew was topped with about half a finger’s worth of tan foam that didn’t linger overly long. Being as this version of the brew was also 11% ABV, this didn’t surprise me. This wasn’t a fizzy lager. I didn’t expect a lot of long-lasting head.

I know it said orange and chocolate on the bottle, but still the scent surprised me. They were both very present in the nose, though it should be noted that it was more the scent of orange peel than pulp. Not surprisingly, the booze also was rather noticeable, and it was only enhanced by the scent of bourbon barrel. My brain is hard-wired to detect the scent of charred barrel as alcohol in the same way that the smell of coffee starts waking people up.

It also tasted like candy. Dark bakers’ chocolate and candied orange peel met cigar smoke and wood. Mix in some creamy roasted stout, and you begin to get an idea of what this brew is like. The mouthfeel was like a truffle melting on my tongue. Then there is the booze and the bitter toastiness of it. It never got super sweet, instead having much more of an emphasis on the chocolate than the sugar. The smokiness just continued to build as I drank it in such a pleasing way.

I’m not even through the entire bottle and I’m feeling just a bit buzzed. This was everything I liked about Dragon’s Milk and more. Frankly, I’m sold on every special release of this it does moving forward. I have some hunting to do to see if I can find some of the 2019 brews. If you have any leads, be a friend and let me know, huh?