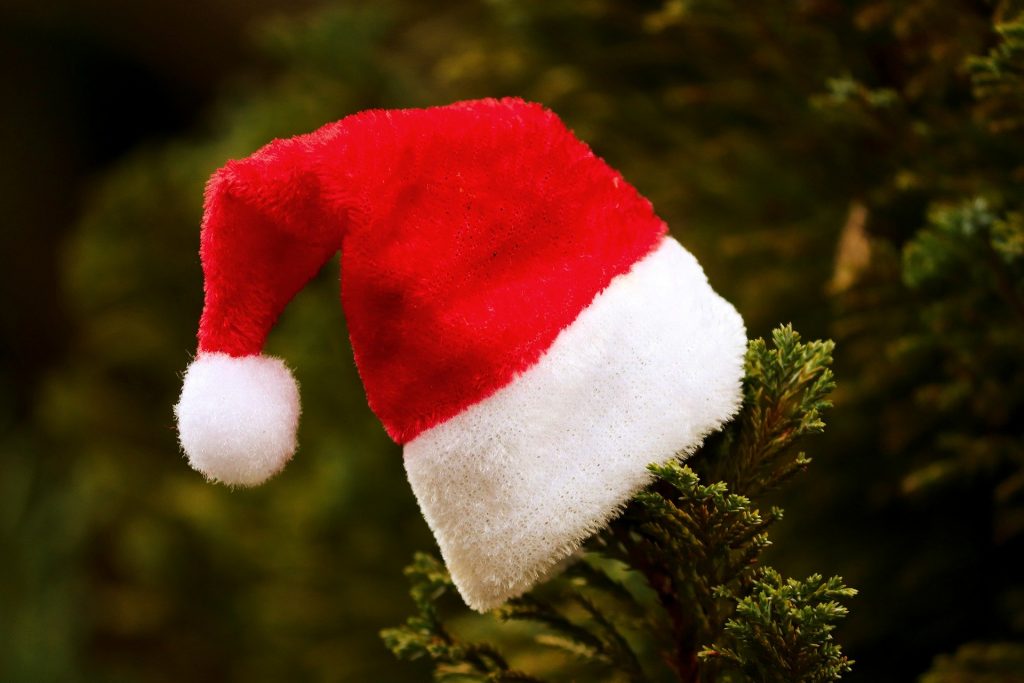 He’s always liked giving gifts more than receiving them. His Orwigsburg home looks like the set of “Meet Me in St. Louis,” a Victorian Christmas cottage of gas lamps, candles, snowmen and angels.

On his sofa, there’s a throw blanket of a boy and a bunny building a snowman in the woods. There’s a sign on his front door that reads “Attack cat on duty,” but Bailey is as much a gentle giant as his ruddy, white-haired owner.

In this little slice of the North Pole in Schuylkill County, Strouse, 75, doesn’t see much difference between himself and Santa Claus. And why would he? After all, he’s been playing St. Nick for the last 50 years.

“I live my life the same way,” he said. “I try to help people; that’s what Santa Claus is all about.”

The walls of Strouse’s living room are covered in antique photographs, family pictures and pastoral paintings of children frolicking with their animals. The paintings call Strouse’s earliest childhood Christmases to mind. He was born on a farm in Landingville, one of six children.

“We had a lot of family but not a lot of gifts,” he said. “My mom was an excellent cook so we were never short of food, especially baked goods.”

Strouse grew up with a religious mother who taught the word of Jesus and Santa in equal measure. He has fond memories of leaving cookies and milk out for Santa on Christmas Eve, the excitement of seeing what he left under the tree the next morning, and dinner with family. After graduating from high school in 1962, he joined the Army and spent two Christmases in Germany.

“We just had us,” he remembered. “We didn’t have a Santa Claus, of course.”

Strouse’s first Santa suit was a hand-me-down. In 1969, he was 25 and a member of the Orwigsburg Lions Club. That December, his friend didn’t feel like playing Santa anymore, so Strouse took over, giving the kids oranges, candy and popcorn balls.

“A lot of fun, that’s for sure,” he said. “Well, they are just starry-eyed and they are the same today as they were 50 years ago. They are just thrilled to see Santa.”

He started getting requests to play Santa at churches and fire companies around the county. It was around that time that he met his wife, Sandra Lee, an avid antique collector. She always kept Kris Kringle crisp, helping Strouse dress and picking out his new suit from Gombar’s in Saint Clair.

“She encouraged me to do it,” he said. “When I was first asked (to play Santa), she was thrilled. She’s a Santa person. She was a Christmas person.”

He joined the Orwigsburg Jaycees and played Santa for them until the age of 36, when he became what they call an “exhausted rooster.” They held a roast for him, and Sandra Lee’s aunt drew a caricature of him. The giant portrait, drawn when Strouse’s hair was still blonde, shows him in a Santa suit.

“He does a very good job and he’s always very good with all the children and adults,” said Orwigsburg borough worker David Teter. “He’s been a great Santa for the community.”

“I look in the mirror and there I am,” Strouse said. “Even the adults, they like to say hi to Santa Claus. I was doing Santa for my son-in-law’s family this previous Sunday, and three young boys were out in the parking lot. I would say they didn’t believe in Santa Claus, and I said hi and I asked them if they were good.”

When he came outside, the three boys were waiting for him, asking for pictures with Santa.

“One thing I learned is how important it is to the children,” he said. “They were very excited about it and it hasn’t changed. Some of the children that came to me, they’re now retiring.” 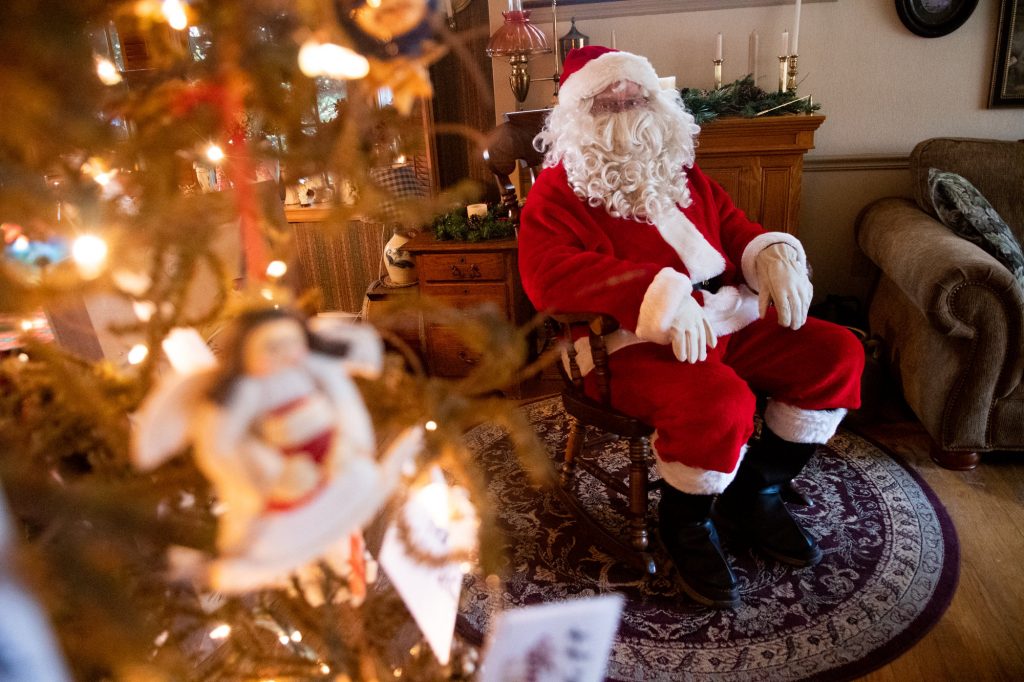 DAVID MCKEOWN / STAFF PHOTOGRAPHER
Dale Strouse, Orwigsburg, dons his Santa Claus outfit as he has done for 50 years at his Orwigsburg home.

So is Strouse himself retiring. He expects 2019 to be his last year playing Santa. After 50 years, having kids sitting on his lap is starting to hurt. He is beginning to lose his hearing, but since “Santa doesn’t wear hearing aids,” he never used them while performing.

“As Santa, I feel that I provided a service,” he said. “I know that there are other Santas who would take my place in a heartbeat, and will have to. I feel like I was doing my civic duty. When they needed a Santa Claus, they asked me to do it.”

Above all else, he wants to be remembered as a good Santa Claus.

After 50 years, Strouse has had generations of children sit on his lap. There are photos of him in basements, attics and albums in homes across Schuylkill County and beyond. He’s seen their wishes go from G.I. Joe to Pokemon. Lately, he doesn’t even recognize much of the technology they ask him for. He also noticed that while 7- and 8-year-olds used to be stalwart Santa believers, nowadays they tend to no longer believe. In 2018, his 7-year-old grandson Emmett started questioning. At the Deer Lake Fire Company Christmas party that year, Strouse reprised the role of Santa. Emmett pulled on Strouse’s beard and said, “I know it’s you, Grandpa.”

“I think kids can believe in Santa Claus until they figure out for themselves or someone tells him,” he said. “I don’t see anything wrong with it at all. That’s why I like to do it, I like to carry it on. I hope this continues for a long time … It’s exciting for them and it gives them something to strive for, to be good.”

To him, Santa means giving, and that is a message that both children and adults can learn from.

Even if the children were “deathly afraid” of Santa, Strouse encouraged parents to take the picture anyway. It would be a cherished memory someday. Some children asked Santa for their broken families to be reconciled. Others asked about “different illnesses they would like Santa Claus to assist in.”

“It’s very moving,” he said, to see such selflessness come from a child of 4 or 5. Those moments reminded him of just how much faith some children have in Santa.

In September 2015, Sandra Lee died after a long illness. Even from bed, she inspected Strouse’s Santa suit. That Christmas, Strouse had to play the jolly old elf during one of the darkest periods of his life.

“It was tough,” he said. “But it was something I had done for so many years, it was just natural to do it. I missed her.”

To Strouse, Christmas has always been about family. When his children were little, they sat on his lap and had no idea they were talking to their dad.

“That was pretty good,” he said, smiling warmly.

“(Christmas) is a wonderful thing and is a big family thing. When my wife was alive, this thing was full of friends and family.” He gestured toward his dining room table.

Strouse walked down the stairs into his basement, home to a cabinet full of Sandra Lee’s Santa figurines, a doll in a wicker stroller and a wooden organ his wife used to play. There are paintings of Santa Claus on the walls and Santas hanging from the tall, thin Christmas tree. He walked into his basement closet and picked up a cardboard box. He untied the rope and there it was — his suit. He picked up his red suspenders and set them on a box of family photos — memories on top of memories. He then picked up the boots, the most difficult part of the outfit. They’re almost impossible to coordinate with the suit.

“The children don’t see some of that stuff,” Strouse said, “they see Santa Claus.”

They weren’t picky about whether he wore gloves, but he did, to cover up his large hands calloused by years of work.

“The fact that I’m giving it up, it’s tough,” he said. “I’m not giving it up totally, I’m going to keep the suit, as memories as much as anything. If I’m needed somewhere, I would do it.”

He laid down his hat.