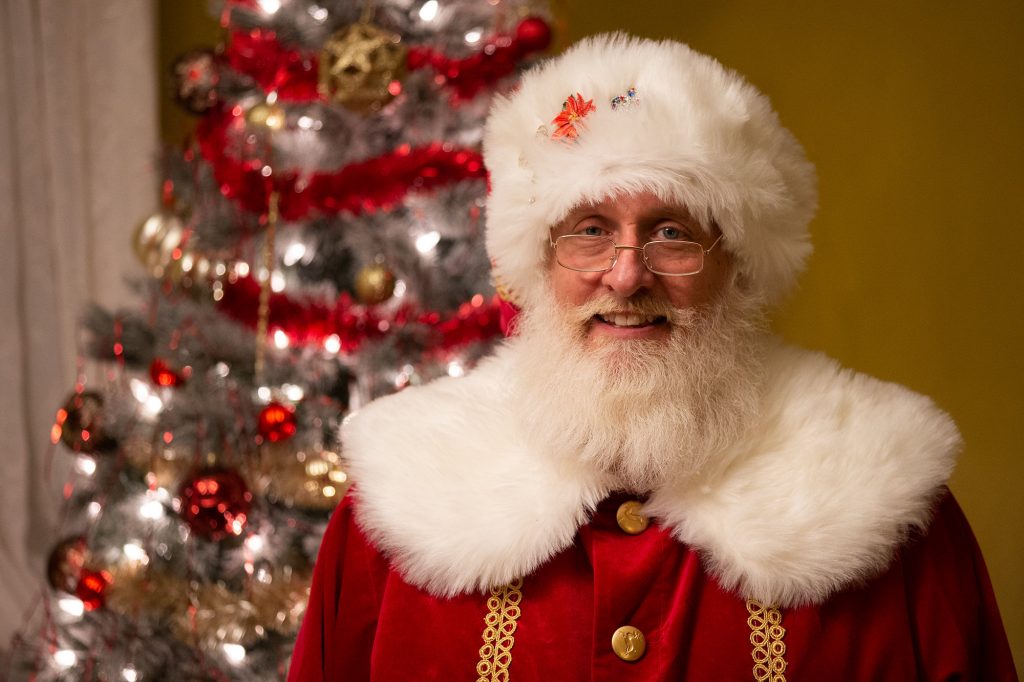 Being Santa Claus isn’t about the bushy white beard, big round belly or fleet of flying reindeer. “It’s about what’s in your heart,” said Kevin Schorn, a 62-year-old data analyst who decided to become the North Pole toymaker this year. “If you do (have the heart), you can put on the red suit and be the best Santa Claus around, and I believe it’s in my heart.”

The Scranton resident and Chicago native underwent a drastic noel transformation this year, growing a Kriss Kringle beard, buying a tailored Santa suit and even attending the International University of Santa Claus in Long Island to get a “Bachelor of SantaClausology.”

“As soon as you put on the suit, whatever your beard looks like, whatever your face (looks like), none of it matters,” Schorn said. “The little kid is going to recognize you as Santa Claus.”

The rest of the look is so the parents know you’re Santa. Schorn certainly sells the part, from donning a crushed red velvet suit emblazoned with gold piping and faux white fur to bellowing a “Ho, ho, ho, Merry Christmas!”

This Jolly Old St. Nicholas wasn’t always so jolly on Christmas. Schorn stopped celebrating when his father, John, died in 1995.

“He was sort of the Christmas glue that brought it all together,” Schorn said. “Afterward, it wasn’t the same.”

Schorn and his wife of 39 years, Bonnie, who moonlights as Mrs. Claus, raised their children in the Jewish faith. Prior to his father’s death, the family celebrated both Christmas and Hanukkah, he said. Bonnie Schorn is Jewish, but her husband isn’t.

Kevin Schorn’s rejuvenated Christmas cheer was a culmination of events, he explained.

Last Christmas, his son’s girlfriend surprised him with a Chicago Cubs shirt — his beloved baseball team. Then in the spring, he dressed up as a Nabisco Teddy Graham for his employer, Mondelez International, which owns Nabisco, and visited a preschool program in Wilkes-Barre. He enjoyed it so much, he asked himself, “How can I find a way to continue doing this?”

Something clicked, and he decided he would become Santa Claus in memory of his dad.

“My father loved Christmas,” he said. “He would’ve been an awesome Santa.”

So, the Santa hopeful starting researching and found the Santa university. 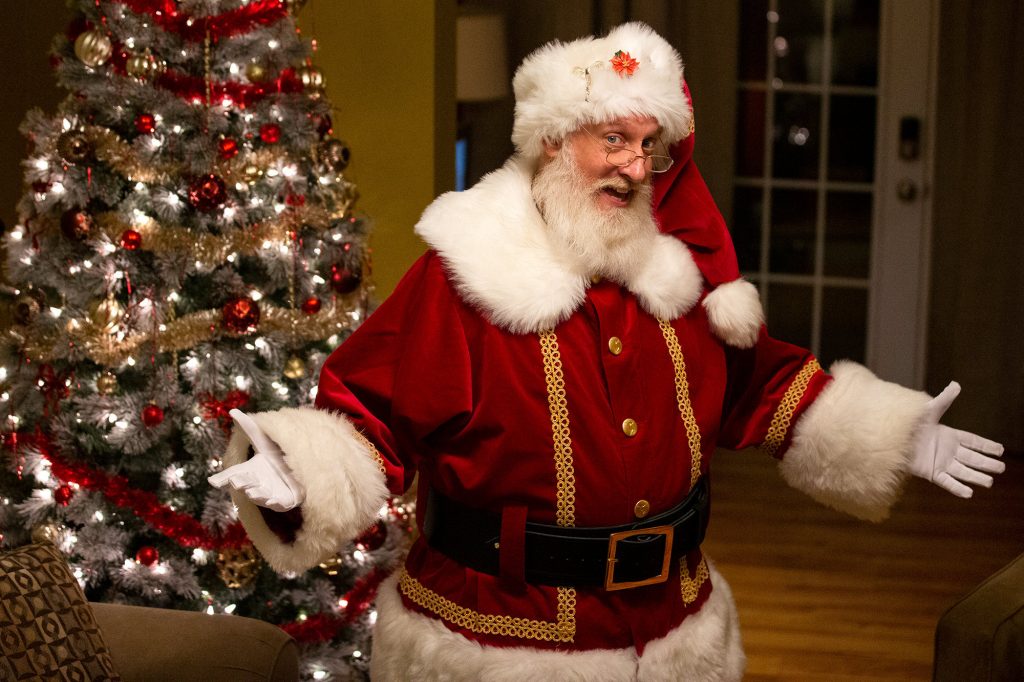 CHRISTOPHER DOLAN / STAFF PHOTOGRAPHER
Kevin Schorn dresses as Santa at his home in the Minooka section of Scranton.

At the International University of Santa Claus, Schorn learned everything from beard maintenance to the history of St. Nicholas.

His instructor, Tim Connaghan, is a celebrity Santa of sorts who earned the title of “National Santa” for his work with Toys for Tots. Connaghan&#8217;s website boasts a slide show of his celebrity appearances, including handing out presents with First Lady Melania Trump and modeling for the cover of JCPenney catalogues.

On Schorn’s first day of class in June, he looked around and saw a room filled with Santas.

“I’m like, I’m taking a class with Santa. It’s really Santa,” he laughed. “You can’t appreciate how surreal it is when you’re walking around a hotel with 11 Santas.”

Connaghan has taught 4,200 Santas and Mrs. Clauses over the past 16 years at his two-day school, which travels the country. He estimates he’s interacted with more than 100,000 children in his 50 years of being Santa Claus.

During the class, Connaghan teaches Santas how to deal with the unexpected.

Schorn has already had some tricky questions, but he was prepared. Backstory is key, he said, explaining the importance of answering questions on the fly. Through social media, Santas will pool their experiences, sharing their answers to questions kids might have.

Schorn recalled a worried young boy who wondered how he would get his presents if his house didn’t have a chimney. Schorn reached into his coat, pulled out a large, shiny key and said Santa’s magic key lets him into houses without a chimney.

It’s the same reason he carries a sleigh driver’s license and a “naughty or nice inspector” badge.

Santa will encounter difficult situations when children confide in him that their parents are divorced, a loved one died or even a parent is in jail. Connaghan teaches his Santa students to listen to what the children are saying and acknowledge the burden they just shared, although the problem is outside of the toymaker’s scope.

“You’re not going to fix it, but at least you’re letting them know you understand,” he said.

While his class teaches the fundamentals, much of the experience comes from actually sitting in Santa’s chair with children, Connaghan said.

Schorn choked up with emotion as he described what it’s like to be Santa Claus.

He recalled his first experience as Santa in November. He visited a young girl in Hanover Twp. who was estranged from her parents and living with her grandmother.

“She squeezed me so tight around the neck I thought she was going to choke me to death,” he said, taking off his glasses to wipe away a tear. “I let her wear my Santa hat, and she was just beside herself. She was so excited and so shy all at the same time, and so proud that Santa and Mrs. Claus came to visit her at her home.”

He’s since had about 10 appearances as Santa, with his next event on Christmas Eve in Moosic.

To prepare for an event, he puts peppermint balm in his beard and dabs peppermint essential oil behind his ears to ensure he smells like a candy cane.

“When I get ready, I’m still Kevin,” he said, explaining his wife helps him put on his outfit because he has arthritis. “Once I get my jacket on, I’m Santa Claus. … Santa Claus doesn’t have arthritis, but Kevin does.”

As Santa, he runs around the room, excitedly engaging with kids. But Kevin might need help getting into his car because his knees hurt so much afterward, he said.

Schorn is limited to shorter appearances per doctor’s orders. He’s suffered three heart attacks in just under four years, with one in September and another in October.

“I decided to go with him because I’m concerned about him doing anything alone,” Bonnie Schorn said. “As long as I was going with him, I decided, ‘Well, I can do Mrs. Claus.’ ”

She enjoys being Santa’s wife, singing with children and reading stories with them, but she does it for her husband.

“The thing I love best about it is how he’s radiating joy,” she said.

After multiple brushes with death, Kevin Schorn believes he found his purpose as Santa.

“People keep telling me, ‘You know why this is happening? You have something to do,’ ” the Santa Claus said. “I’m thinking this might be it.”