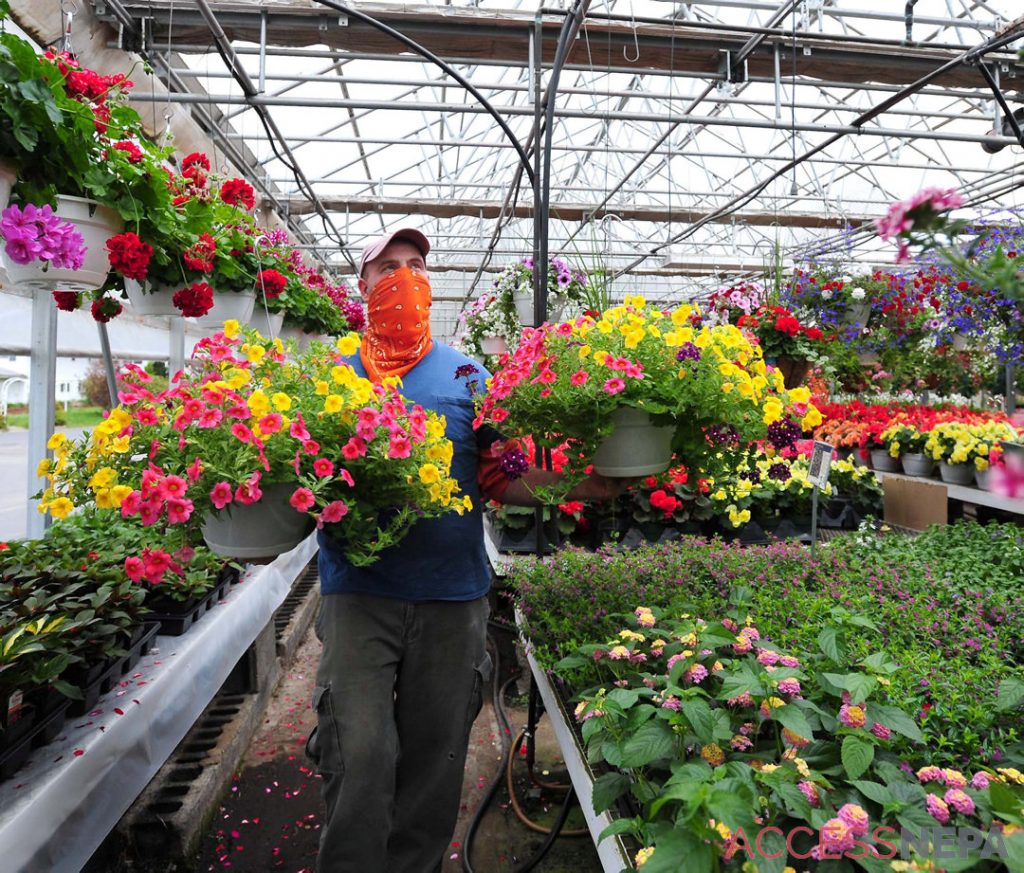 The coronavirus pandemic hasn’t stopped van Hoekelen Greenhouses in McAdoo from providing plants and flowers to supermarkets nationwide but the business was forced to shut down its retail garden center this spring.

It’s one of many family-owned garden centers throughout the state that have remained closed since Gov. Tom Wolf ordered “non-life-sustaining” businesses shut down in March to contain the spread of coronavirus.

Alex van Hoekelen, who operates van Hoekelen Greenhouses with his parents and his sister, said they normally operate the garden center for short times from the Easter season through July, in the fall to sell mums and in the Christmas season to sell poinsettias.

While they have adhered to Wolf’s order to shut down their garden center, he said they don’t agree with the mandate.

Many independent garden center owners’ livelihoods revolve around their businesses being open in the spring, van Hoekelen said.

He said it’s frustrating that garden centers don’t have solid answers about when they can reopen.

“For us, our garden center is seasonal. However, it is something that definitely is a source of revenue for us in the times we have it open,” van Hoekelen said. “The spring is obviously very big. Now we can’t have it open for the local people who have supported us in the 30-plus years we have been here.”

Van Hoekelen Greenhouses has been a family-owned business since 1988 and calls itself the “largest bulb grower on the East Coast.”

“We need something positive during this time,” van Hoekelen said. “We felt that people need plants as well. We’re lucky to be in a business to produce things that make people happy.” 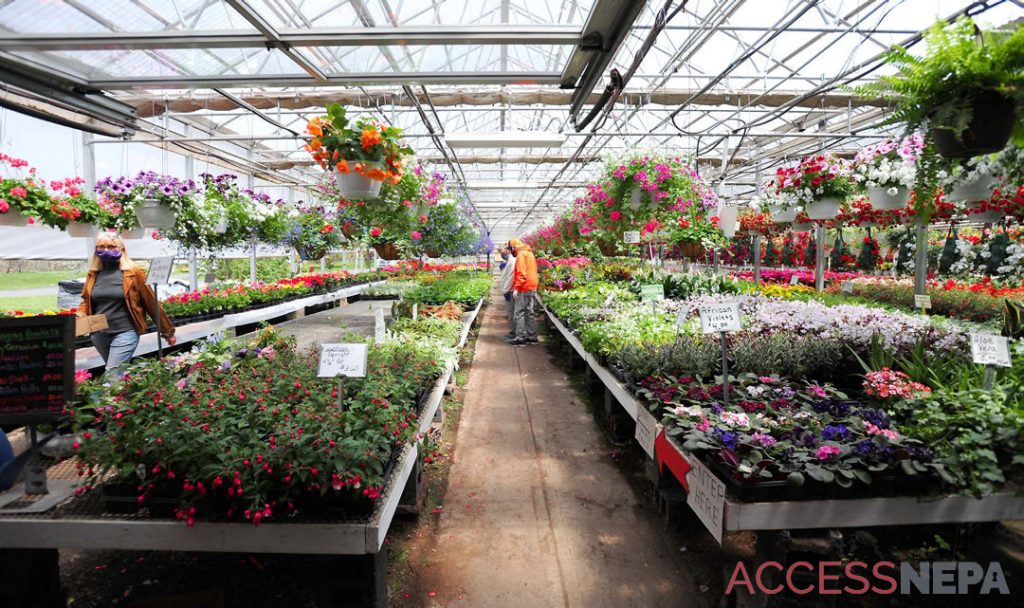 MARK MORAN / STAFF PHOTOGRAPHER
Customers shop Wednesday in one of the greenhouses at Larry O’Malia’s Farm & Greenhouses in Plains Twp.

The petition was started on April 14 by the Pennsylvania Landscape & Nursery Association, which represents garden centers, greenhouses, nurseries and landscape contractors in Pennsylvania and can be seen on change.org/OpenPaGardenCenters.

“We are hopeful that the governor will see that a significant number of his constituents support their local family-owned garden centers and want them to be able to serve their communities during this COVID-19 crisis,” said PLNA board Chairman Ted Ventre.

According to the PLNA, a recent survey revealed that 77% of adults spend time gardening around their homes. More than one-third grow some of their own food, a proportion that will likely increase during the COVID-19 crisis.

Independent family-owned garden centers are at a critical time. Most make up to 75% of their annual revenue from April to June and the spring season carries them throughout the rest of the year. 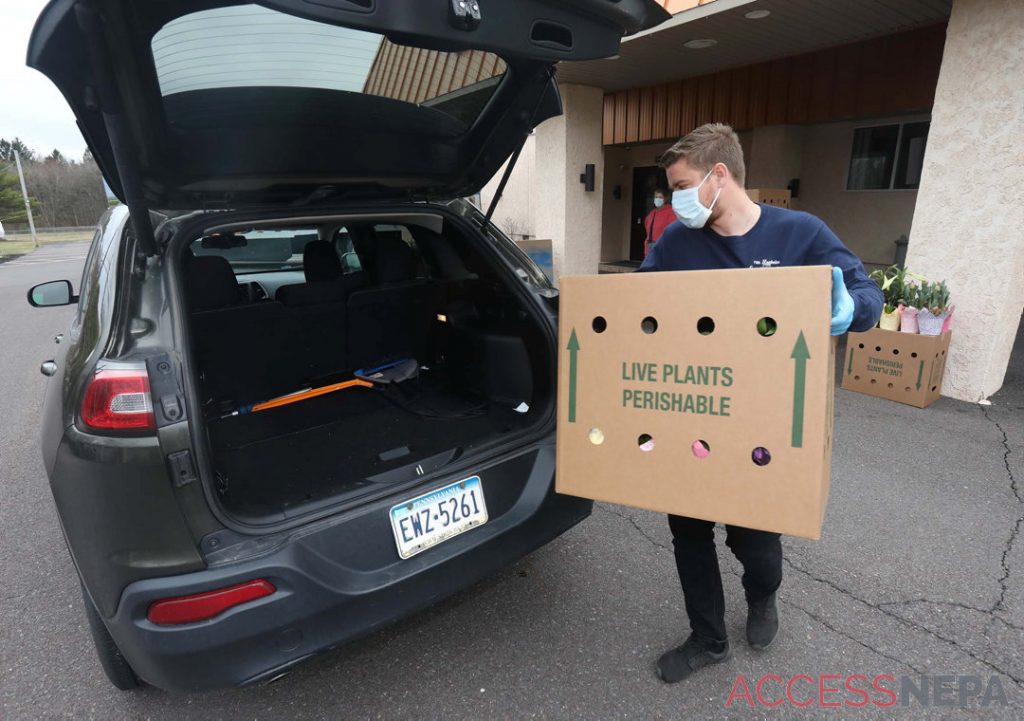 DAVE SCHERBENCO / STAFF PHOTOGRAPHER
Alex van Hoekelen loads a box of Easter flowers into the back of a customer’s vehicle during a drive-thru sale the McAdoo greenhouse held recently at Four Blooms restaurant in Drums.

While independent family-owned garden centers were forced to shut down, Wolf classified greenhouses as essential businesses since they supply food.

Larry O’Malia’s Farm & Greenhouses in Plains Twp. is open for outside sales and recently added new items such as cold weather crops like lettuce, cabbage, broccoli and cauliflower as well as herbs and hanging baskets.

Larry O’Malia said there has been discrepancy about who falls into which category.

“There were differences between nurseries, greenhouses and landscapers,” O’Malia said. “In this business, a lot of guys fall under multiple headings.”

He grows vegetables on 40 acres along the Susquehanna River with his brother Gary and they sell vegetable plants as part of their greenhouse operation so he said he wasn’t concerned about his business being shut down.

He said they are asking customers to maintain social distancing and wear masks. They also are selling masks.

“We are limiting how many people can go into the greenhouse so they can maintain social distancing,” O’Malia said.

They previously set an “honor system” in front of their building but recently opened registers.

“We think we’re going to sell an exceptional amount of vegetable plants to consumers this year,” O’Malia said. “When the weather is nice, we are busy.”

Stanton’s Greenhouse at 709 Layton Road in the Chinchilla section of South Abington Twp., opened on Friday. It will be open every day from 8 a.m. to 6 p.m. in the first few weeks of May with plans to later extend hours from 8 a.m. to 8 p.m.

“We actually plant things and grow them,” he said. “We have flowers and vegetable plants.”

Tomato and pepper plants are for sale at Stanton’s Greenhouse as well as cabbage, cauliflower, broccoli, herbs and thousands of hanging flower baskets.

Stanton said he also is asking customers to wear masks and the business will supply hand sanitizer.

“People could take their wagons up to the register like they always did before as long as there is spacing,” he said.