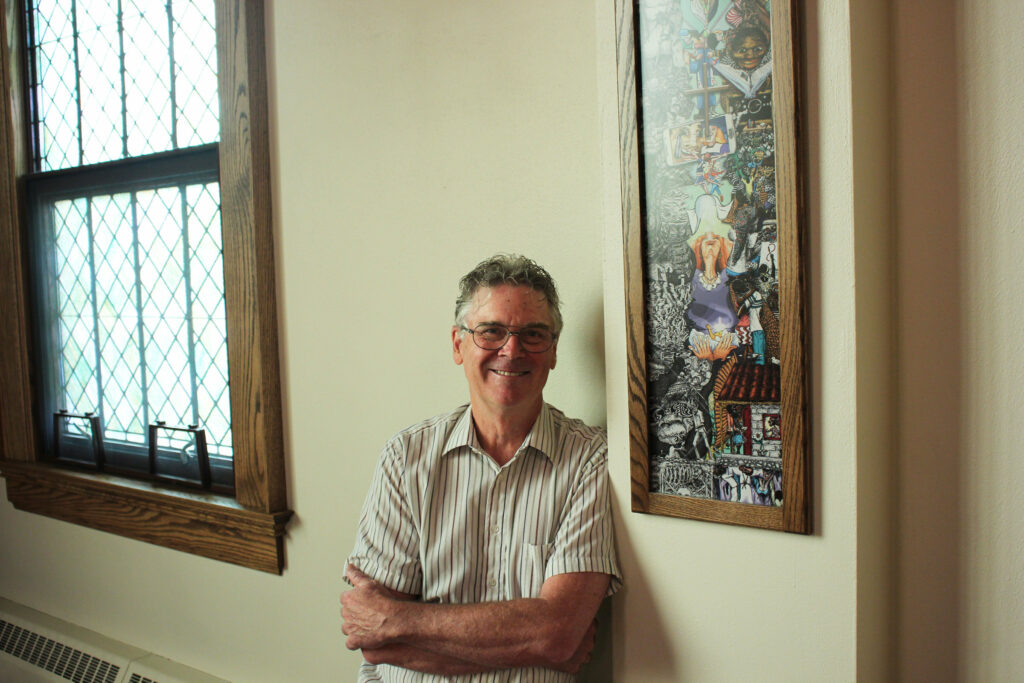 SUBMITTED ARTWORK The Pillar Art Collection by David Porter includes this piece, titled “People.” The mixed-media collage celebrates family and community. The central figures are bound together in a symbol of eternity.

A church in the Abingtons recently added art to its sanctuary.

A long-time supporter of the arts, First Presbyterian Church of Clarks Summit secured artwork for the pillars that flank either side of the auditorium. A member of the church, David Porter, offered to create 10 pieces that would represent themes important to the congregation.

Porter has worked in art and design ever since graduating from Temple University’s Tyler School of Art and Architecture in 1977. He’s been an art director, designer and an artist for newspapers and magazines across the United States. He is a professor in the visual arts department at Keystone College. He recently produced a documentary.

He and Donna, his wife of 43 years, live in Clarks Summit. They have a son, Jacob and daughter, Kaitlin.

In 2018, the Music and Worship Committee of First Presbyterian Church was granted funds to decorate the pillars between the stained-glass windows of the sanctuary. Porter volunteered to donate original works of art. He was awarded the Chamberlain Chair for distinguished faculty service at Keystone College in May 2018. The school gave him a sabbatical, so he had the time to devote to finishing the pieces.

“Everything kind of aligned at that time and I felt confident I could complete this project,” Porter said.

Concepts for the project were solicited from the congregation of First Presbyterian Church of Clarks Summit. Porter used images to create collages. Each of the 10 pieces focuses on a theme that is important to the members of the church.

Though the mixed media artwork is simplistic in theme, the pieces are also complex with layers of images, numerous scenes and various colors. The images’ relations to and interactions with each other create a variety of concepts. Some pieces have a contrast of black and white art alongside colorful images.

In the work titled “Women,” the black and white images show the struggle of women and things women have had to overcome. The piece also has colorful images of women as they rise to leadership and empowerment.

Faith is a thread that appeared in many of Porter’s pieces. The work titled “Prayer” has the words to “The Lord’s Prayer” on it. At the top is a large ear which Porter said signifies the ear of God listening to the prayers of his children.

“Creation” shows a collage of creatures from many species, scenes of nature and a beam of light signifying the beginning of time, reaching out from a center point. Porter explained he hoped this piece would challenge people to be diligent guardians of creation and have respect for the environment.

His piece “God of All” pictures the four elements of earth and the spirit of God. Porter began to explain the hands and feet that appear in a single column in the center of the piece, but stopped himself.

“Now, I’m starting to interpret my piece, and that’s not my intent,” he said. “My intent is that when someone looks at it, they will find their own meaning. That is my hope for each one of these pieces.”

Porter explained that viewers will bring their experience and interpretation to his work.

Porter’s passions for equality, social justice and the environment, along with depictions of the dichotomy between good and evil and themes of faith and humanity are seen throughout his work.

The entire process – from initial concepts to when The Pillar Art Collection was completed and presented to the church – was about a year, Porter said.

His process is as complex as his art. Porter uses a Wacom tablet, computer and various digital tools and editing software to create his art. Some images that Porter uses are graphics and images he edited and enhanced. Others are original pen and ink drawings. Everything comes together as a mixed media collage with digital output.

The Pillar Art Collection by Porter was printed on archival white paper and laminated to ultraviolet resistant plexiglass. The 10 pieces were placed in custom wood frames that were stained to match the interior woodwork of the church. Carpenter Ross Taylor crafted the frames.

The pieces in The Pillar Art Collection each have a diamond grid pattern within the collage that mimics the windows in the church. Some images are inside the “window” and some are outside. Using the diamond grid pattern to reveal depth, Porter explained he made the pieces as elaborate as possible so they wouldn’t be one-dimensional.

“I desire to produce deep and meaningful things – more complex works of art that can have many meanings,” he said.

Porter’s work is intended to provoke thought as it engages the viewer.

The mindfulness Porter took is evident, from themes that reflect what is important to church members, as well as the design and presentation that compliments the interior of the building. His work can be seen whenever First Presbyterian Church of Clarks Summit is open or at upcoming church events such as the Arts Concert Series, beginning Oct. 20. Visit fpccs.org for more information.