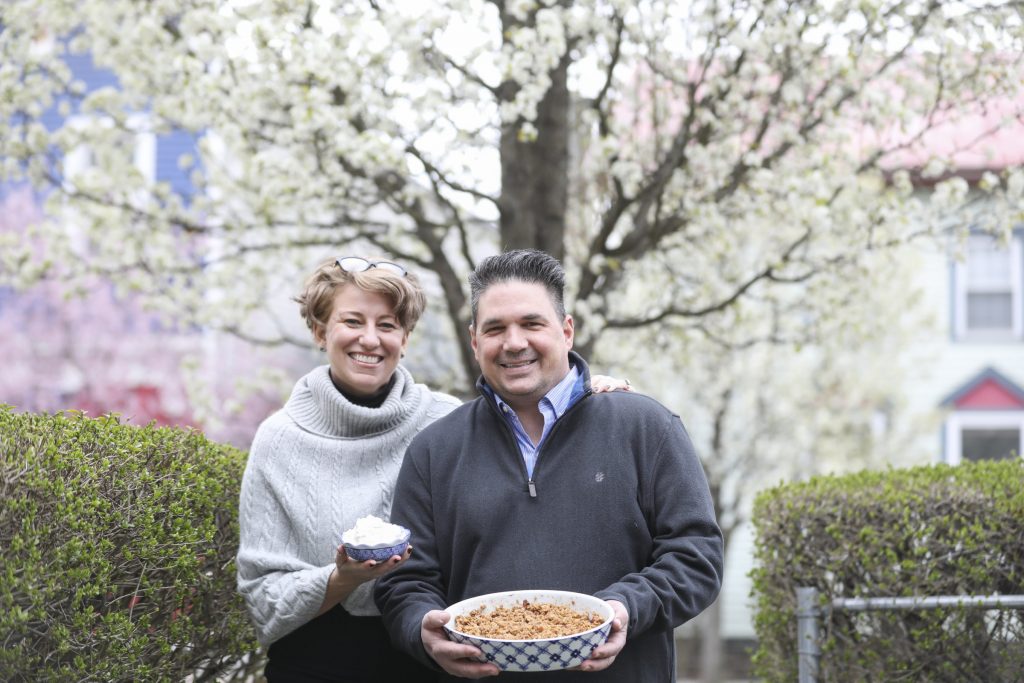 Iris Castellani has always felt at home in the kitchen.

She has cooked and baked since she was a young girl, when she’d watch her Nana, the late Anne Golden, as she created recipes ranging from homemade sauce to delectable desserts. As Castellani fell in love with the act of cooking and baking, she soon realized that she could make an impact on others through her passion.

“It makes me feel so good to make people happy,” said Castellani, who lives in Hawley with her husband, Robert. “When they taste something and you could see on their face how much they love it, that is the best feeling in the world to me.”

Castellani still creates many of the recipes her grandmother passed down to her and usually adds her own spin. The Castellanis follow a gluten-free and organic diet, but she insists that never means anyone has to sacrifice flavor. When she wanted to make her grandmother’s recipe for Triple Apple Crisp with Homemade Whipped Topping, she knew exactly what to swap in to make this classic recipe suitable for their diets.

The recipe, which earned Castellani a $50 gift card to Riccardo’s Market, 1219 Wheeler Ave., Dunmore, is simple and quick to make, she said, as the entire process only takes an hour, which includes 45 minutes of baking. Crisps are very easy to convert to gluten-free, Castellani said, because you can use any gluten-free flour, oats and sugar.

She uses Fuji, Granny Smith and Gala apples, but Castellani, who has fond memories of her dad picking apples to create the dessert, noted bakers can even use their own fresh-picked apples for the dish. She also advised bakers to keep their mixing bowl in the freezer for 10 minutes before whipping the topping, as it will help it form faster.

“It’s so delicious, and it’s good for you. It’s made with oats. You can even have it for breakfast if you want,” she said. “I think sometimes people think that gluten-free means it can’t taste good, and that’s not the case at all.”

For Castellani, cooking is in her blood. Aside from her grandmother’s guidance, her father owned the Lighthouse restaurant in Lake Winola when she was a child, and she constantly cooked with him, learning to make his signature recipes, from pizza sauce to stromboli.
Castellani then dove headfirst into the restaurant world right out of college with Smiler’s Bar & Grill, Dickson City.

She took the skills she learned from her grandmother and father but also made it a mission to expand her repertoire. Armed with “The Joy of Cooking” cookbook, Castellani taught herself all kinds of recipes, influenced by different cultures to craft menu items.
She also traveled and used the knowledge of food and wine she learned abroad and applied it to her commercial and home cooking. When she met her husband, the two bonded over a love of food and cooking, as he also creates dishes from dozens of his own grandmother’s recipes as well.
Later, Castellani opened DonBaldo’s by Iris, Peckville, where the menu prided it itself on organic ingredients hand-selected by Castellani and her husband.

“There’s nothing like fresh, organic food,” she said. “So much is so processed, and you can taste the difference when something is wholesome.”

Because of illness, some days are more difficult than others for Castellani, but that doesn’t stop her passion. When she is in the kitchen, that’s all that matters.
Castellani hopes to pass on this love of food and cooking with as many people as she can. She aspires to write a cookbook or start a blog where she and her husband can share their recipes and tips with everyone.

“Some days I get up and it’s hard, but I’m never going to quit. This is something that I just love to do,” she said. “I’m so passionate about cooking, and there’s so many amazing flavors and amazing recipes to try. When I am there, that’s my happy place.”

In a separate large bowl, mix together all toppings except butter.
Cut butter into pieces and fold in to topping mixture until crumbly. Then, sprinkle on top of apple mixture in dish.
Bake for 45 minutes or until top is golden brown and apple mixture is bubbling.