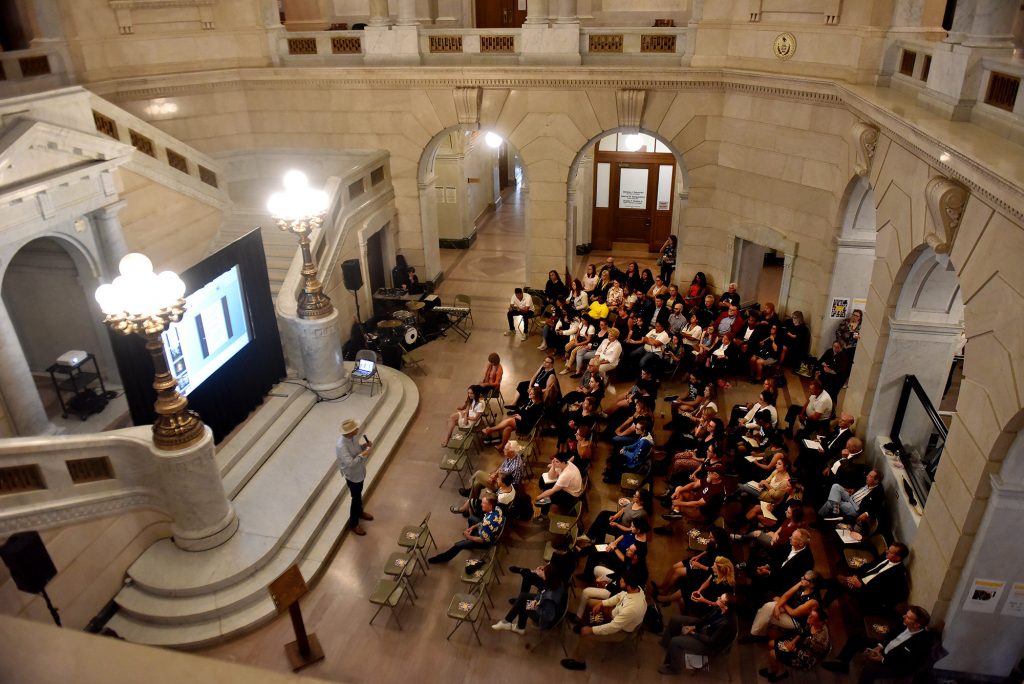 Acclaimed photographer Richard Ross brought his “weapons” inside the Luzerne County Courthouse on Wednesday for a lecture to a captivated audience.

Those weapons, he says, are the photographs of incarcerated juveniles he’s taken over the last decade all over the country. They’ll be on display on the first floor of the courthouse through Oct. 17, a part of which includes Juvenile Justice Week.

“Art is a weapon to change the future,” Ross, a retired professor from California, told the large crowd assembled in the courthouse rotunda. “I try to create images that will sear you.”

His startling photos, which include images of shackled children and those hiding in the corners of lonely isolated cells, now line the walls of the courthouse first floor. Some of them are accompanied by a handwritten letter by the juvenile describing their plight and feeling of helplessness behind bars.

Such scenes could have very well been taken in Luzerne County just over a decade ago before the kids-for-cash scandal here that led to sweeping changes across the state, Luzerne County Manager David Pedri told the crowd.

Two county judges were accused of accepting $2.8 million in kickbacks in exchange for funneling hundreds of juvenile defendants to for-profit detention centers.

Since then, the county’s courts, prosecutors and defense attorneys made wholesale changes to revolutionize the juvenile justice system in Luzerne County and make it a model across the state, Pedri said.

“They said, ‘Never again’ and they fixed the system,” Pedri said. “Think about how far we’ve come.” 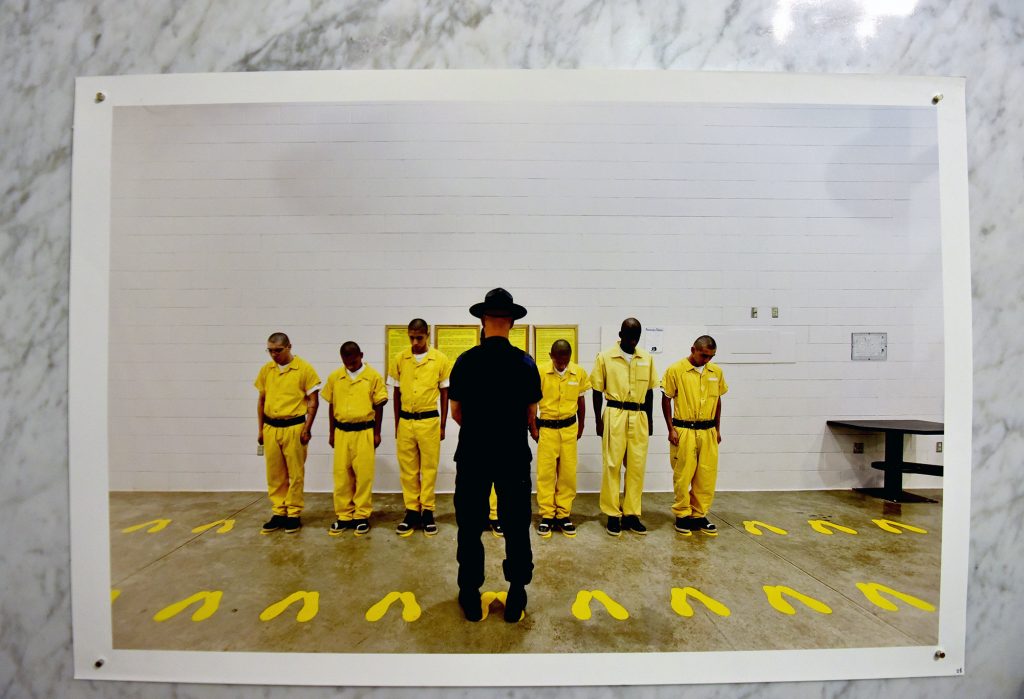 SEAN MCKEAG / STAFF PHOTOGRAPHER A photo taken in 2010 of a Youth Offender System Facility in Pueblo, Colorado, hangs on the wall in the Luzerne County Court House in Wilkes-Barre. The photo is part of a larger body of work by Richard Ross titled “Juvenile in Justice” exhibit, hosted by The Social Fabric Collective.

Wednesday’s lecture and photo exhibition was the kickoff event for a program called “Changing the Narrative,” which advocates for diversionary programs for juvenile offenders as opposed to placement in detention centers. The program is the work of Social Fabric Collective, a local nonprofit that uses photography and art for advocacy campaigns.

Jamie Smith, 42, executive director of Social Fabric Collective, was a student of Ross at the University of Santa Barbara in California and invited Ross to bring his traveling exhibit to Luzerne County.

Then he pitched the idea to Pedri.

“At first I was taken aback,” Pedri admitted, saying he wondered if the county should bring in a project that would reopen old wounds of the kids-for-cash scandal.

He finally decided it would be a way to show how far Luzerne County has come.

“We run one of the best juvenile courts in the Commonwealth of Pennsylvania,” Pedri said.

Ross said his project, “Juvenile In Justice,” started by accident. He visited a prison in El Paso, Texas, for an architecture photo shoot. In one part of the prison, he snapped a photo of six cells. Inside each was a juvenile in an orange jumpsuit with his back turned. It was then he knew he was on to something.

“I started this project without knowing what I was getting myself into,” Ross said.

Over the past 10 years, he’s visited juvenile detention centers in 35 states. He said one would think a more liberal state like California would have facilities with the best conditions, but he’s found it actually has some of the worst. A facility in Tuscaloosa, Alabama, was the best he’s seen, he said.

Ross said he used empathy and compassion to get permission to photograph the children.

“I was the conduit for them. They had no one else,” Ross said. “I’m interested in these kids and I listen.”

Ross said he gives his photos to advocacy organizations for children to push for reforms. Some places have made changes, like the end of solitary confinement for juveniles, after his photos were publicized, he said.

When people see what kids look like when being detained, they tend to agree it’s not right in most cases, he said. Luzerne County residents now have a chance to see what it looks like, Ross said after the lecture.

“This is pressure. It may be non-verbal but it will have an impact,” Ross said. “There are alternatives to locking kids up.”