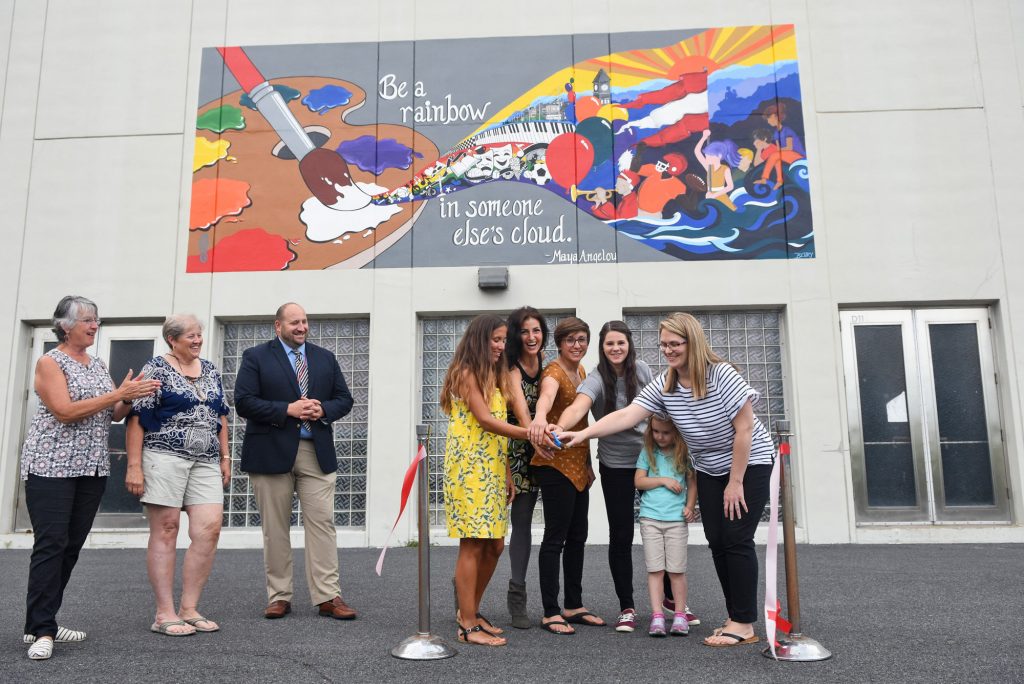 Dutchtown artist Danielle Beury describes it as a “giant paint by number.”

The result of Beury’s talent, along with a collaboration of Pottsville Area School District students and art teachers, was vividly on display Thursday during the ribbon-cutting for a new district mural. The effort was made possible through the Walk In Art Center’s Art 4U “Lacing Communities with Art” initiative.

Nearly 50 people gathered to see the creation above the exit doors at the Ned Hampford Natatorium near the D.H.H. Lengel Middle School rear parking lot.

“It turned out better than I could have imagined,” Superintendent Jeffrey Zwiebel said, after welcoming the crowd and thanking those who participated in the design.

“It took hours, but the preparation in the beginning is really what made it work nicely. We broke out all of the colors and had a big legend with everything numbered with 29 different colors that corresponded to the colors on the (mural) sections,” Beury said.

The mural is made up of 10 5-by-5-foot sections. It depicts a paint palette, which flows into school scenes of students participating in sports, drama and musical pursuits. The mural also features a few county landscapes. At the center is a Maya Angelo quote: “Be a rainbow in someone else’s cloud.”

Some of the mural was completed at the John S. Clarke Elementary Center, some at the middle school and some at the high school.

“We wanted the kids to have fun and didn’t want them to feel intimidated. We made it really comfortable for them because it was broken down into such a simple form,” she said.

School board director Pat Moran also joined in the celebration. However, Sara Arnold, another high school art teacher involved with the effort, was unable to attend.

Beury, who was the artist in residence at the Pottsville Area School District this year, met with the district art department to discuss the mural. She collaborated with students to come up with the finished design.

Students in all grade levels worked on the project for three days in May. The elementary students did the larger swaths of color, while the middle school students painted other sections and the high school students contributed to the more detailed areas.

Beury spent many hours working on it at the WIAC, and was also assisted by students and other WIAC artists to complete the work.

Once the murals are up, they should last about 20 to 30 years, according to Felker.

Artists use a special mural paint on a durable mural fabric called poly tab. They apply a sealant and put a coat of ultraviolet protection on top of that.

“Some of the artists were asking if they could thin it down, and we said, ‘No,’ ” Felker said of the mural paint, which is thick and has more intense color.

A specially designed adhesive is used on the back of the mural so it can be placed on the wall, similar to a wallpaper installation. The mural conforms to the surface upon which it’s placed.

Beury and Gilbert spent at least 13 hours on a scaffold lift erecting the mural in July.

Felker said the project will enable students to return to the district as adults and tell their children, “I painted that.”

“It really pops,” Zwiebel said. “We have an alumni band here, and I’ll be curious to hear what the members have to say about it. This will be seen by a lot of people and it’s in a high-volume place.”

When the WIAC found out the art in education funding was available, the center stepped in to help administer the funding in late January or early February, Felker said.

There are also WIAC Art4U projects in Minersville and Tamaqua.

Each district also came up with some matching funding for the projects. Zwiebel said in Pottsville’s case, the district contributed approximately $2,300 toward supplies.

“We wanted to acknowledge and thank the teachers, artist and the students for getting it done. They did a fantastic job and it’s beautiful,” Felker said.

The Minersville mural was already erected on the Minersville baseball field dugout; however, finishing touches are still underway and are anticipated to be completed within a few weeks. The WIAC artist on that project, Pablo Kulp, attended Thursday’s ribbon-cutting.

“It has a lot of fine detail work on it,” she said.

WIAC artist Julie Richards, who was also an artist in residence at Tamaqua Area School District, worked in collaboration with the district, community and the Tamaqua Community Arts Center to conceptualize the mural. Richards worked alongside WIAC studio artist and art teacher Lori Remmel.

The Tamaqua mural will be placed on the side of the Verizon building in the borough.

The three WIAC Art 4U murals are the latest large-scale artwork pieces springing up in the county.

“Last year, we had a Philadelphia muralist come up to work on a mural at Lewis’s General Store in downtown Schuylkill Haven, and that became the decision for us to bring more murals to the community, whether it’s at a business, a school district or public place so everyone can enjoy it,” Jordan Fees, WIAC event coordinator, said.