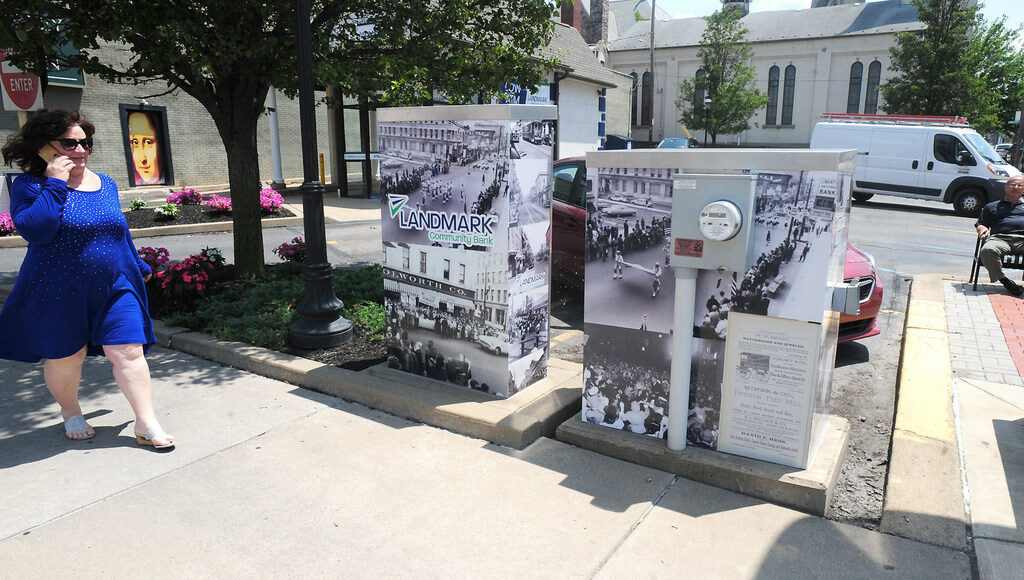 It might be said the Leadership Wilkes-Barre Group known as “Back to the Future: Pittston Edition” has downtown history all wrapped up.

The Leadership group threw a fundraising party at the Tomato Bar earlier this year and solicited sponsorships to raise nearly $7,000 to pay for eight depictions of the downtown area wrapped on traffic signal electrical boxes on five Main Street intersections and on Kennedy Boulevard.

The six-month project, which began with the Tomato Bar fundraiser, was completed July 8. Mayor Mike Lombardo called the box wraps an “awesome project.”

Lombardo explained he saw similar boxes wrapped with art in another city on his travels. He talked to Ron Faraday, president of the Greater Pittston Historical Society and the city’s facilities manager, and they came up with the idea of using history depictions to decorate the boxes.

Faraday took measurements of the boxes, and with vintage photos of the intersections, maps, and pages from an 1891 Pittston City Directory, he created folders for each box. He took them to Wet Paint Graphics and Design in Wilkes-Barre. Wet Paint made and installed the vinyl wraps. The durable material is treated with ultraviolet and graffiti protection.

The designs depict what the neighborhoods near the boxes looked like in the past, or, as in the case of the Kennedy Boulevard and Water Street box, a significant event. That box is wrapped with the iconic picture of President John F. Kennedy surrounded by hundreds of fans during his campaign visit to Pittston in 1960. The box is right across Water Street from the JFK statue.

Lombardo and Faraday are happy with the results.

“They did a great job,” Faraday said.

The historically wrapped boxes can be seen at six intersections in the city, at Main Street and Swallow, Columbus, Market, Broad and at Kennedy Boulevard at William and Water streets.