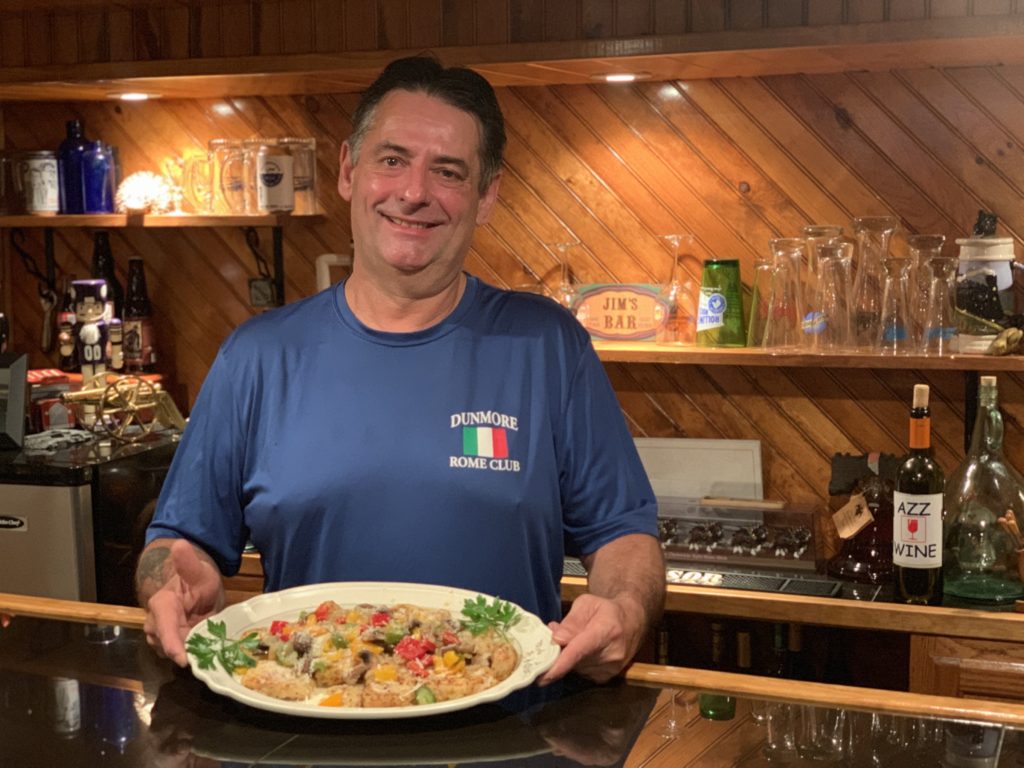 Today, though, he’s known by family, friends and co-workers for his seafood recipes, especially the one for Locatelli Fish Filets.

The Dunmore resident found the original recipe in the Pennsylvania Outdoor Cookbook but made some changes. First, he swapped the trout for cod, something he caught a lot of. He also decided to use locatelli cheese instead of Parmesan. Azzarelli’s Locatelli Fish Filets were born, and they’ve been a hit ever since.

“I love this recipe so much that I think it should be in a restaurant,” Azzarelli said during a recent day inside the Dunmore home he shares with his wife, Carolyn. “I make it all the time.”

The recipe — which earned Azzarelli a $50 grocery gift card from Riccardo’s Market, 1219 Wheeler Ave., Dunmore — is simple and straightforward, he said, and takes about 30 minutes to make. The recipe also is versatile, Azzarelli said, and cooks can use different kinds of fish, including crappie or yellow perch filets. He advised cooks to watch the fish closely to ensure it does not burn; they may have to add more olive oil if needed.

When Azzarelli adjusted the original recipe, he added olive oil in place of some of the butter it had called for. Olive oil burns a little faster, but it’s worth it to Azzarelli.

“Olive oil just gives everything a better flavor,” he said.

The olive oil may have had something to do with the taste, as Azzarelli’s Locatelli Fish Filets hit it out of the park. The fish was fresh, and the outside breading was cooked to the perfect golden brown. The red, green and yellow peppers added amazing flavor and looked great on the plate.

“He added the vegetables because he likes the way the different colors look,” his wife said, laughing.
“The presentation is all part of it,” Azzarelli added.

Cooking runs in Azzarelli’s family. His late father, Liberto, was a cook in the Air Force, while his mom, Geraldine, is French, so there were plenty of different dishes made in his home growing up.

Today, the Dunmore man is always experimenting with new dishes and swaps recipes with co-workers at Gertrude Hawk Chocolates as well as with friends, including those he travels with yearly to see the World Series of Bocce Ball in Rome, New York. The event has been a tradition since he was in his late teens, and the crew from Rome has become almost family to Azzarelli and his friends. And since Italian culture revolves so heavily around food, there always are lots of recipes to trade.

At home, Carolyn Azzarelli cooks the family meals and her husband, who works a later shift, usually makes his own dinner. If it’s something he knows the family will like, such as his famous chili recipe and his homemade meatballs, he’ll leave some for them.

Of the couple’s two grown daughters, Maura prefers to cook and excels at it, while the youngest, Caroline, is great at baking.
Azzarelli insists that his family is always willing to try whatever he comes up with.

“They’re the guinea pigs and my toughest critics,” he said with a laugh. “If they like it, I know it’s good.”