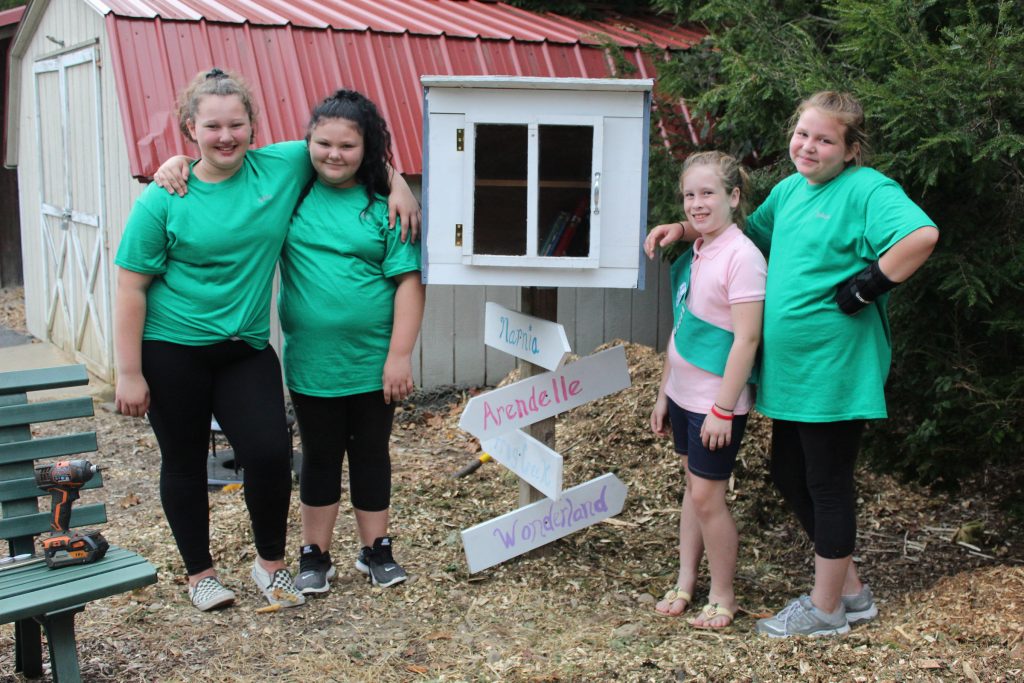 Visitors of Christy Mathewson Park in Factoryville can now enjoy a free lending library thanks to a group of local Girl Scouts.

Lackawanna Trail sixth graders Lizzy Cokely and Natalie Rought teamed up with fifth graders Bella Davis and Delana Aten to bring the “take a book, leave a book” concept to the park.

All Juniors from Troop 52239 in Factoryville, the scouts installed the outdoor library last week with the help of their troop leaders Jessica Howell and Rebecca Aten.

The girls donated a stack of starter books, but hope park visitors could also contribute books for all ages to the collection as they take them out to read.

The scouts planned the project for their Bronze Award, the highest honor a Junior could earn.

The troop held several meetings in Christy Mathewson Park to get outside, where Howell encouraged the girls to consider ideas for their Bronze Award.

They narrowed it down to three options, including a book path and a project to help animals, but ultimately voted on the library.

To earn the Bronze Award, scouts first need to go on a Girl Scout Journey, which they completed in April.

That same month, scouts attended a Factoryville Borough Council meeting to request permission to eventually place their lending library in the park.

The Bronze Award project required at least 20 hours of work.

Scouts solicited donations, which was another project requirement, from Dalton Do it Center and Edwards Automotive Repair, as well as family and friends.

They walked through Christy Mathewson Park together to determine the best spot: right next to the playgrounds and a park bench.

Since May, Troop 52239 leaders and parents took the scouts through the building process.

“I think they like the idea of being able to build and learn new skills,” Howell said.

The girls collectively chose the color and design of the structure. Also, each team member handpainted a sign with a fictional destination: Narnia, Arrendele, Frog Creek and Wonderland.

The four scouts, all of which enjoy reading themselves, agreed that it felt good to share books with the Factoryville community.

“I hope it can get people to read more,” Aten said.

Davis started in brownies, while Aten joined as a Junior. Rought has been involved since the beginning with Daisies and recruited Cokely to join her as a Junior.

A desire to help others drew Rought to Girl Scouts, which was the hope of the Bronze Award project.

“I still love helping people and the environment,” Rought said.