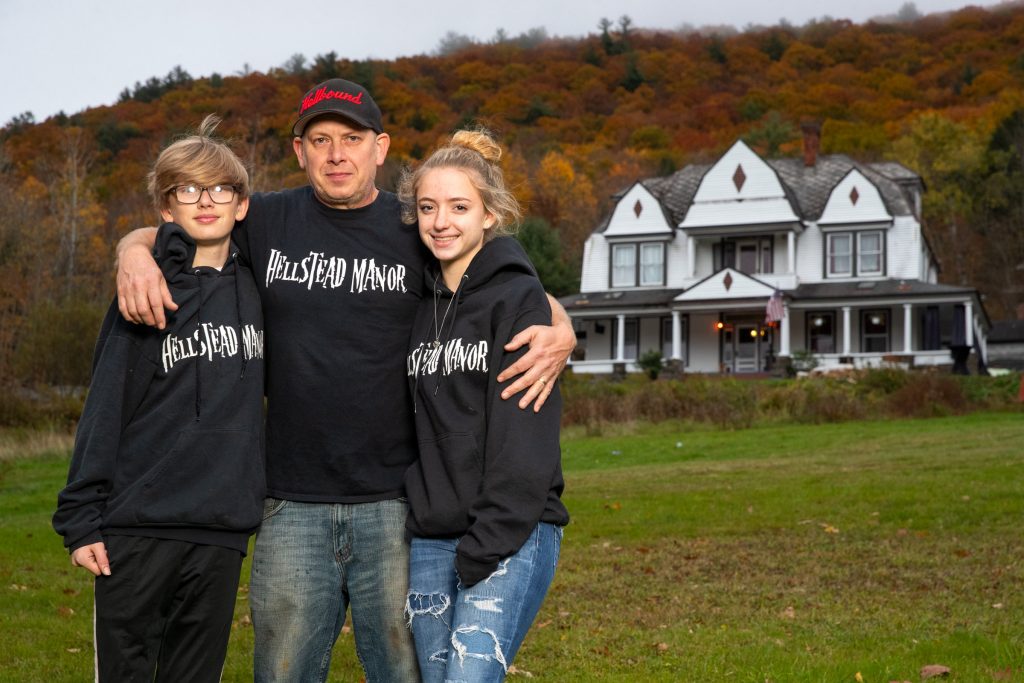 Home is where the scares are for Eric Lusk.

The Hallstead resident is a professional prosthetics makeup artist whose Hollywood career involved creating otherworldly looks in films such as “The Omen” and “X-Men: The Last Stand” and realistic details on shows including “CSI,” “NCIS” and “House,” the latter of which earned him a group Emmy Award.

When he and wife, Michelle, started their family, however, they moved from Los Angeles back home to Northeast Pennsylvania. That’s when he decided to bring his talent for crafting gruesome creatures and intricate effects home.

In 2016, the looming Victorian home at 630 Harmony Road, Hallstead (Great Bend Twp.), which had been in Lusk’s wife’s family for years, officially became Hellstead Manor, a haunted attraction that treats guests to creepy characters, mind-bending situations and an overwhelming sense of uneasiness that many horror lovers crave, he said.

“I tried hard to make the house itself as scary as possible,” said Lusk, who also lives inside the home with his family. “I wanted it to be like just being inside the house would give people the creeps. We do a lot of messing with people’s minds, and I think it’s more fun to scare people that way. They don’t even know what they’re scared of, but inside the Manor, they have that unsettled feeling that something is coming.”

Guests at Hellstead Manor – which begins inside the house and then leads into an addition Lusk made – are treated to the unfortunate story of Dr. Halstadt, his family and a failed experiment that caused devastating and disturbing results. Thanks to Lusk’s career making monsters and other gory creations in film and TV, he makes everything for Hellstead Manor himself, from prosthetics to what guests see on the walls and inside the house to the creatures outdoors. 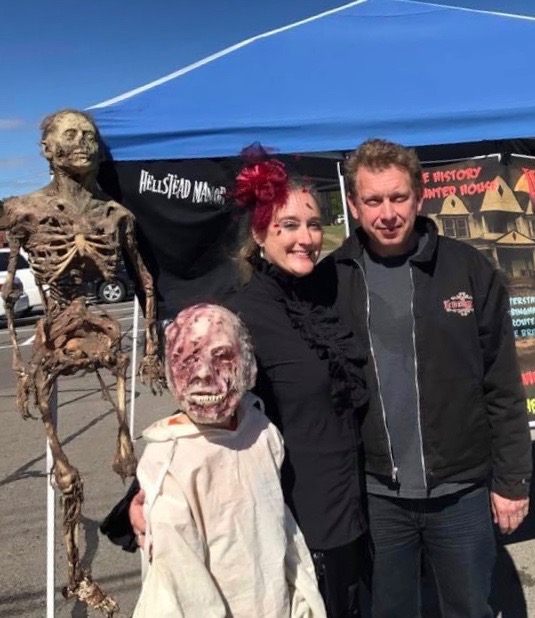 The whole Lusk family works at Hellstead Manor, including, Michelle and Eric Lusk and their son, Braddoc, left, and daughter, Cadence, not pictured.

Lusk actually didn’t intentionally set out for a career in special effects makeup. Growing up in Hallstead, Lusk felt drawn to creative outlets and went on to attend art schools in New Jersey and New York City. He began his career drawing for comic books before moving out west to do animation storyboards for cartoons including “Men in Black,” “Dilbert” and more. Then, special effects makeup started to become more popular, and with his wife’s support, he made the jump from his secure, high-paying union job to attend a trade school in Hollywood, where he learned the ins and outs of prosthetics.

“As soon as I started, I was like, ‘This is awesome. This is where I want to be,'” he said. “I basically got hired by my instructors for these small B-movies and little projects that I couldn’t even tell you the names of now, but it was just so much fun.”

Eventually, Lusk’s work caught the eye of Joe Blasco Makeup Artists Training Center, where he enrolled to learn more about application and technique. He also worked his way up to supervisor in a shop owned by Matthew Mungle, who worked on “The X-Files” and “Edward Scissorhands” and won an Academy Award for best makeup in 1992 for “Bram Stoker’s Dracula.”

“He became like a mentor to me, and I really was honing my skills,” Lusk said.

In L.A., Lusk did makeup and prosthetics for numerous notable television shows and movies before starting his own shop. As a “hired gun,” Lusk said, sometimes he would only get a piece of the script and wouldn’t always know what production he worked on unless he happened to see his creation in the finished product.

“I was watching (‘Wild Hogs’), and the deputy’s ear, I was like, ‘That’s one of mine,'” he recalled with a laugh. “You never know where you’ll see your work. It really is so funny and crazy.” 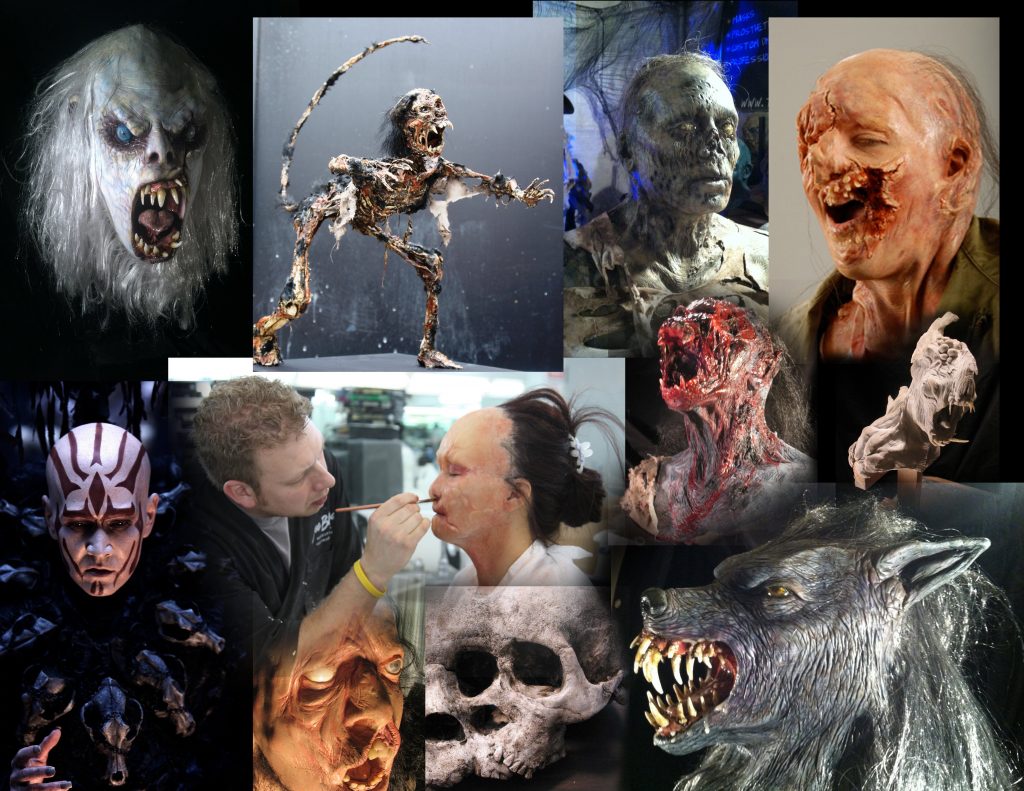 Before opening Hellstead Manor back home, Eric Lusk worked in Hollywood creating prosthetics and special effects makeup looks for movies such as “The Omen” and “X-Men: The Last Stand” and realistic details on shows including “CSI,” “NCIS” and “House,” the latter of which earned him a group Emmy Award.

After more than 12 years in L.A., Lusk and his wife were ready to start their family and moved home. Lusk continued to create pieces for film and TV, such as giant piranhas and other beasts for “River Monsters,” from his home workshop. Some work required him to travel, which meant being away from his wife and kids for months at a time. It got to be too much, though, and Lusk felt a haunted attraction would be the perfect way to fulfill his creativity and let him be with his family. When his wife’s grandmother, Marilyn Swavola, was ready to sell her Victorian home on Harmony Road, the couple knew it was the right fit for them.

“As a little girl, I always loved that house and have so many amazing memories from it, and this was the best way to take Eric’s Hollywood experience and bring it to Northeastern Pennsylvania,” Michelle Lusk said.

The Lusks, who are high school sweethearts and have been married for 24 years, have made the attraction the center of their family’s life. As the business manager of a local school district by day, Michelle Lusk handles the business aspect of Hellstead Manor at night as general manager.

Their kids – daughter Cadence, 16, and son, Braddoc, 14 – both act in the attraction and absolutely love it, their dad said. 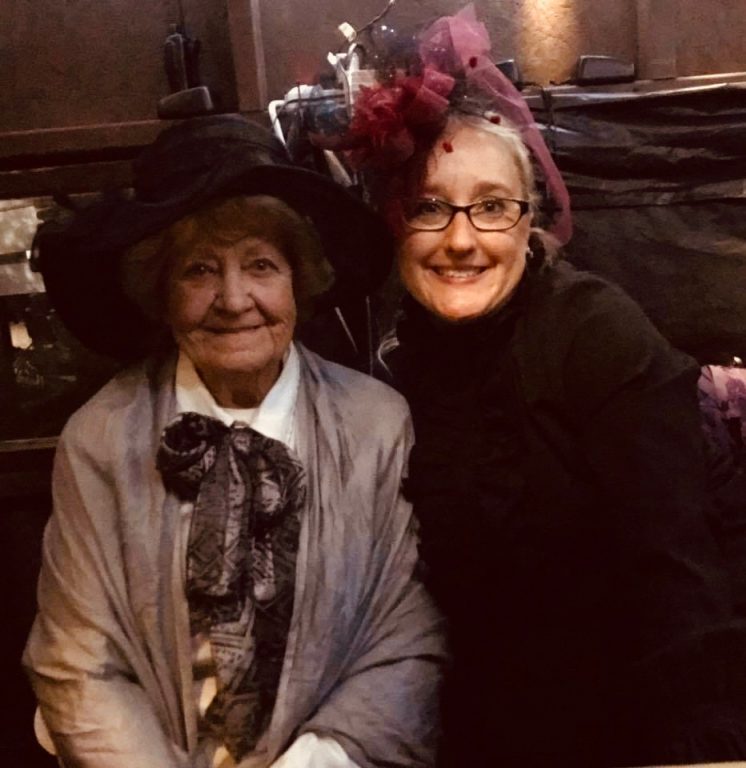 Michelle Lusk, right, sits with her grandmother, Marilyn Swavola, who raised her six children inside the home before the Lusks bought it and transformed it into Hellstead Manor.

Swavola, 88, also lives inside the home with the family and enjoys watching the carloads of guests come up the Hellstead Manor driveway, ready for a good scare, Michelle Lusk said. Plus, there’s more than just actors inspiring fright on the property. The whole family believes the house, which was built in 1852, is home to actual spirits.

“I think (Swavola) was very excited for her ghosts and our ghosts to meet,” Michelle Lusk said.

Since its first year, the attraction has grown and expanded, with Lusk adding and tweaking details every year. Hellstead Manor does not include “clowns or chainsaws” or jump scares, and actors never touch the guests, Lusk said. Instead, Hellstead Manor relies on psychological terror.

“It’s a little different than other haunts around the area, and there’s nothing wrong with (jump scares),” he said. “We just wanted it to be more about the story and the house. The house is a huge part of it, and it’s part of messing with people’s minds.”

Like many business owners, Lusk had to adapt this year to maintain safety and sanitization guidelines throughout the coronavirus pandemic. With many film and TV productions on hiatus, he hasn’t had as many custom creations to work on in his spare time.

As for the Manor, the Lusks have cut their number of actors in half, only operate on Fridays and Saturdays, and require all guests to wear masks. They’ve also had to change the attraction’s story and logistics. However, the spirit of Hellstead Manor still remains, Lusk said. While he doesn’t attend attraction conventions or frequently post to social media, Lusk pours all of his creativity and craftsmanship into making Hellstead Manor the best it can be.

“The house itself has that scare factor; we designed it that way,” he said. “The rest is the life breathed into it, just from how much we all love doing what we do. … I love this. We’re having a really great time, and you can’t ask for anything better.”

If You Go
What: Hellstead Manor
When: Fridays and Saturdays, 7 to 11p.m., through Oct. 31
Where: 630 Harmony Road, Hallstead (Great Bend Twp.)
Details: Admission costs $27. Visit hellstead manor.com or Hellstead Manor on Facebook, call 570-396-5871 or email info@hellsteadmanor.com.