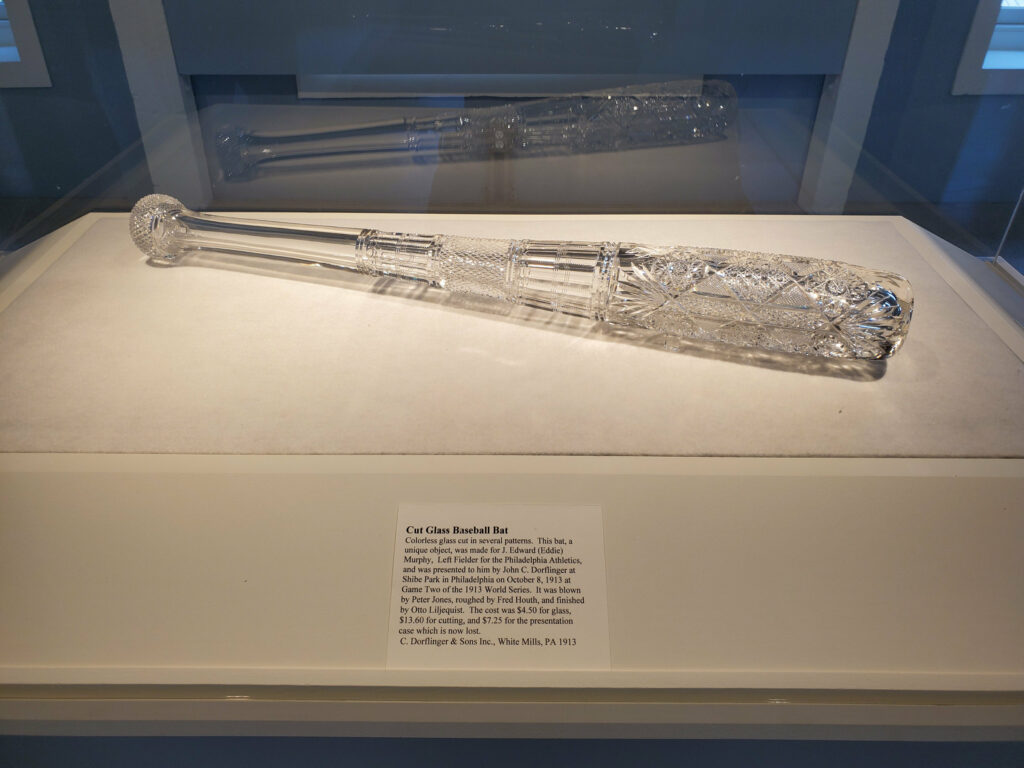 More than a century ago, baseball was the pastime for small communities, their team a sense of pride for the folks in towns across Northeast Pennsylvania.

An exhibit at Dorflinger Factory Museum in White Mills, featuring a one-of-a-kind cut-glass bat, and the baseball artwork of Fleetville’s Bill Chickillo, are reminding baseball fans and art lovers of the rich history of the game throughout our region.

“Look at how many people turned out for this game,” noted Jim Asselstine, director of the museum as he pointed at a reproduction of an early 1900s photo of a game at the field that still exists just down the road. “Baseball was a big deal here. It was the summer pastime.”

The museum invited Chickillo to display about 40 pieces of his work across various mediums through Sept. 15, including an American flag representation made entirely of 299 baseballs.

That, and the glass bat made by Dorflinger craftsmen a century ago and presented to Eddie Murphy, who played for the 1913 World Series champion Philadelphia Athletics, are the drawing cards of the unique display.

“We thought when we set up the exhibit the flag and the bat would be the two centerpieces,” Asselstine said. “Some of the baseballs are so beat up. It’s just an interesting piece. And it makes a great centerpiece for the exhibit.”

There are many interesting pieces, which will continue to be displayed for the next five weeks, the most impressive of which is the glass bat presented to Murphy.

“Murphy played for the White Mills team before he went on to play for the Athletics,” Asselstine said. “In 1913, the Athletics won the pennant.

“Eddie’s friends back at the Dorflinger Factory said we have to do something to recognize what he accomplished. They made this full-size, cut-glass baseball bat. We know from Louis Dorflinger’s diaries — one of Christian Dorflinger’s sons — we know from the diary entry the man who blew the glass for the bat, the man who did the cutting, we know what it cost to make it: $4.50 for the glass, $13.60 for the cutting and $7.25 for a wooden presentation case.”

It was about the equivalent of a week’s salary for one of the blowers, cutters and engravers. Today, it is priceless.

Asselstine should know. He went to great lengths to purchase the bat for the museum when it went up for auction in November 2014.

The bat remained in the Murphy family from the day it was presented to him — before the Athletics took on Hall of Famer and Factoryville native Christy Mathewson and his New York Giants at Philadelphia’s Shibe Park — until a few years ago.

That’s when it went to an online auction of memorabilia across several sports.

It’s also when Asselstine, who vacationed in Tyler Hill in northern Wayne County, and was on the board of directors at Dorflinger-Suydam Wildlife Sanctuary, made up his mind the glass bat needed to find its way back home. 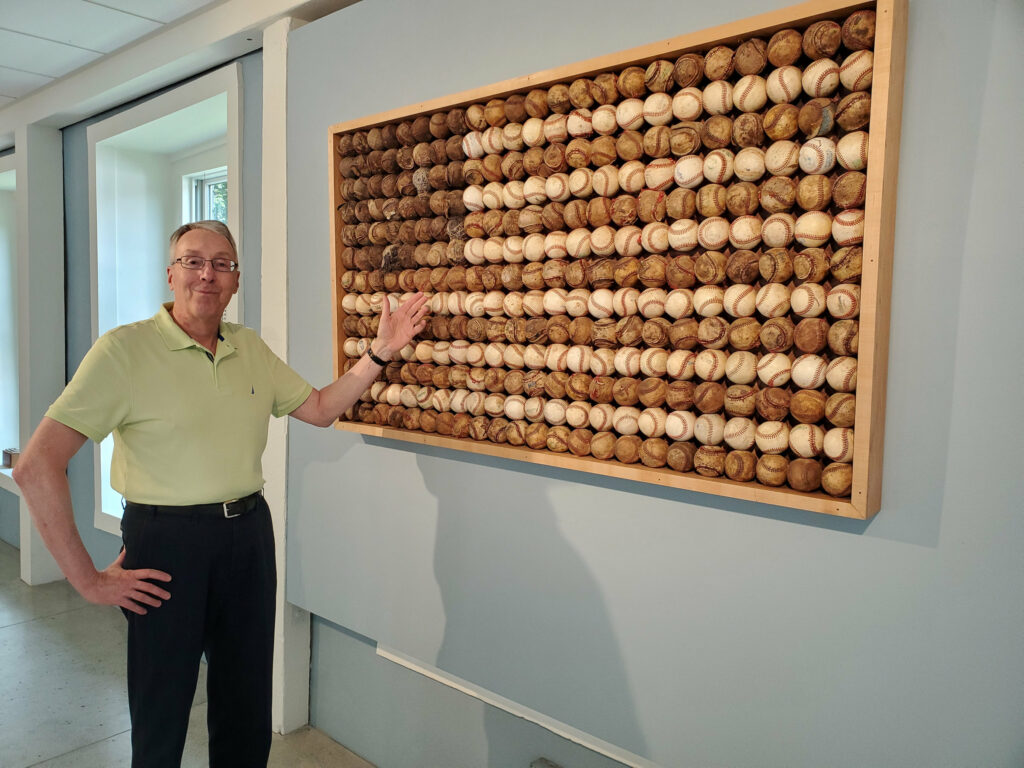 “The bat stayed in the Murphy family until five years ago,” Asselstine said. “It had been on loan to Corning Museum of Glass for about 17 years.”

It was also listed in Corning’s museum brochure as one of the five must-see things while visiting the upstate New York museum.

“They decided they were going to sell it and put it in an internet sports auction in New Jersey,” Asselstine explained. “It was a nightmare of an auction. There was the bat, championship rings, jerseys, for football, baseball, you name it.”

The auction ran for a week, scheduled to end Saturday at 10 p.m. Except that anyone who had bid on an item, any item, during the week, could continue to bid on it as the auction remained open for consecutive 15-minute segments — as long as anyone was bidding on anything.

“You had to check every 15 minutes to make sure someone didn’t bid on your item until the item officially closes,” recalled Asselstine, who retired from the financial services industry in New York City. “In October, the weekend you set the clocks back, it got to 2 a.m. and the clocks reverted back to 1 a.m. The auction finally closed at 5 a.m. Sunday morning.

“I was sitting at my laptop hitting refresh. Lots of cups of coffee. It belonged in White Mills. It wasn’t cheap. It was $110,000, but worth every penny.”

While the bat is a permanent piece at the museum, Chickillo’s works will be gone just as the pennant races heat up. But for now, they give the museum a one-two punch.

It’s not Cooperstown, home of the National Baseball Hall of Fame, but it is an impressive marriage of sports history and fine craftsmanship.

“That’s kind of what we wanted to do this summer,” Asselstine said. “What we try to do here are exhibits that will tie into the glass factory, so the bat helps us do that, but also the local history. Baseball was really an important part of the history for all these little towns.”

Like many of his creations, the Mathewson and Murphy collages are combinations of old baseball cards, remnants of baseballs and slivers of baseball cards and game tickets melded into a slice of Americana. His works at Dorflinger include sculptures, a vintage catcher’s mitt surrounded by baseballs from the same era, a watercolor of Factoryville, and a pastel that ties together White Mills’ baseball and glassmaking stories.

Louis Hensel was an early photographer and his glass photo negatives went to Bob Lizza in Tunkhannock, who blew up two poster-sized prints from those. Then Chickillo combined those two photos to show the ballfield and factory behind it.

“He has a passionate interest in baseball and the history of baseball in this area,” Asseltine said “Those are the kinds of people we really want to find.

“He’s amazingly creative. He really is.”

Among the locals represented in Chickillo’s work are Hall of Famer Hughie Jennings from Pittston, four-time World Series champion Dick Tracewski of Eynon, and Joe Grzenda of Scranton, who played eight seasons in the majors.

“It’s a fun exhibit. It really is,” Asselstine said. “And a perfect thing for summer.”

The Dorflinger factory was restored four years ago and the museum is open Wednesday through Saturday from 10 a.m. to 5 p.m., and Sundays from 1 to 5 p.m.

Admission is $5 and guided tours are available each day.