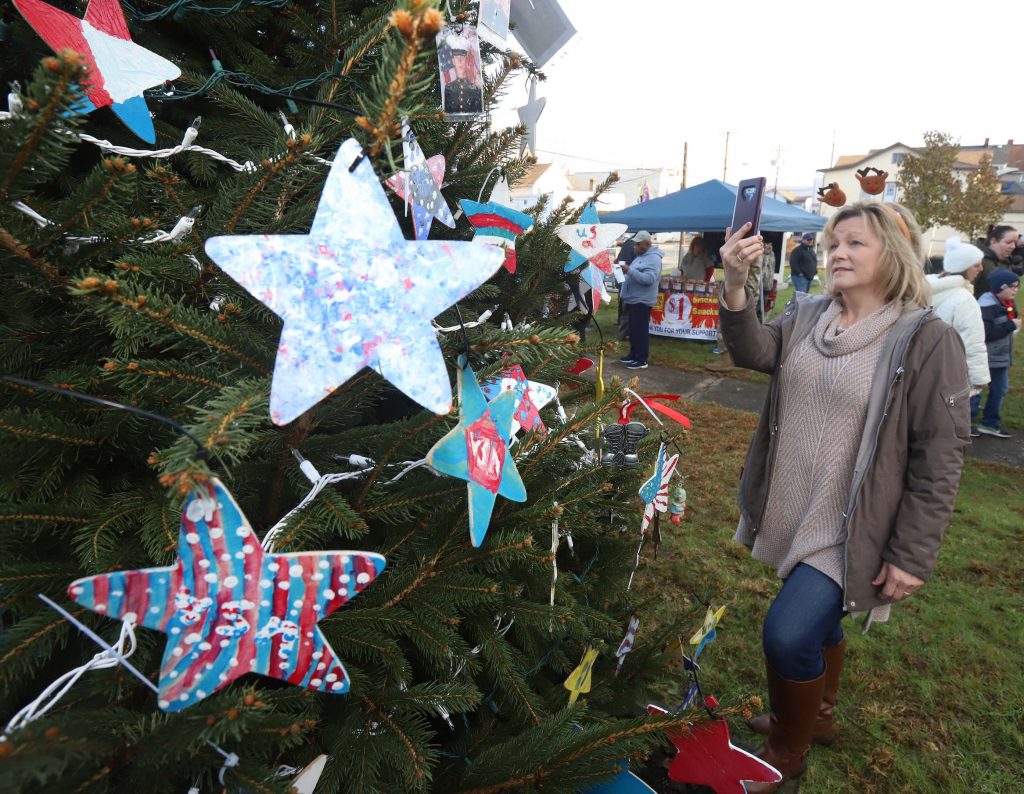 Christmas tree honors military away from home for holidays

The Warrior Tree was lighted for the sixth straight year on Sunday, to honor members of the U.S. military who will not be home for the holidays.

The tree-lighting ceremony will be held each year “until they all come home for Christmas,” said organizer Karen Declet, who launched the event in 2014, when her son was serving in the U.S. Marine Corps.

She founded the Warrior Tree ceremony to make sure the troops forced to spend the holidays on duty, far from home, are not forgotten.

Each ornament on the tree in Edwardsville’s Veterans Park honored a service member stationed overseas. Twenty-two pairs of boots sat on the lawn in front of the tree, to mark the 22 veterans who commit suicide each day. A costumed Sgt. Santa greeted children who then ran off to play on the swings in the park’s playground. A winter coat drive benefited homeless veterans.

The coat drive was organized by AMVETS, an organization that lobbies for veterans’ causes.

Lucius Washington, a U.S. Army veteran and commander of AMVETS Post 59 in Hanover Twp., said he will never forget one year he was stationed in Europe for Christmas.

Washington said he wants troops stationed overseas during holidays to know their service is remembered and appreciated.

He also wants veterans with post traumatic stress disorder to get needed help, so someday there won’t be as many pairs of boots next to the Warrior Tree.

During remarks at the ceremony, Washington touted the success of the AMVETS HEAL Program — it stands for healthcare, evaluation, advocacy and legislation — in helping to stop veterans with suicidal thoughts from killing themselves. In one case, members of a HEAL team got help for a veteran whose family found him holding a gun to his head, he said.

“No veteran should be left behind or be forgotten,” Washington said.

Coats and winter gear for homeless veterans may be dropped off at the AMVETS Post, 578 Fellows Ave. in Hanover Twp., according to Washington.

Veterans who suffer from PTSD or are considering self-harm may call the Veterans Crisis Line at 800-273-8255.