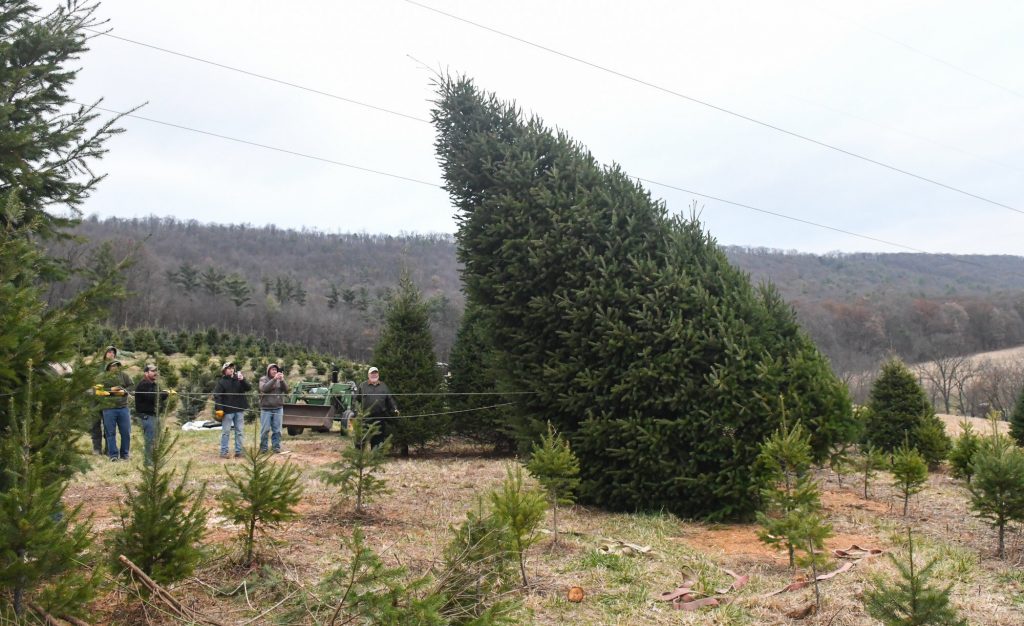 The cause of Larry Snyder’s sleepless nights gingerly fell to the ground Wednesday.

Snyder, and his wife, Joanne, are co-owners of Mahantongo Valley Farms in Pitman, which is supplying the National Christmas Tree to the White House Blue Room this year.

Wednesday was harvest day for the behemoth Douglas Fir selected for the prestigious honor. Snyder is expected to present the tree to First Lady Melania Trump on Monday.

About 20 family and friends gathered at the tree farm, with many of them assisting in the harvesting process.

“I think it went super,” Snyder said, after the evergreen was felled. “There was a lot of anticipation and anxiousness, but I had wonderful people here, with my friends and relatives helping out.”

Snyder won grand champion grower in the National Christmas Tree Association’s tree contest this summer, and with that award comes the honor of presenting a Christmas tree to the White House.

The couple’s son, Aaron Snyder; daughter, Lydia Bomgardner, and son-in-law, Andrew; and their two grandchildren, Mason Snyder and ClairaAnne Bomgardner are expected to make the trip to Washington, D.C., with them for the celebration. The couple will depart Sunday and will stay in a hotel on Pennsylvania Avenue, so they can walk to the White House, Joanne Snyder said. They will receive a White House tour at 10 a.m. Monday morning before the tree presentation sometime between noon and 1 p.m. 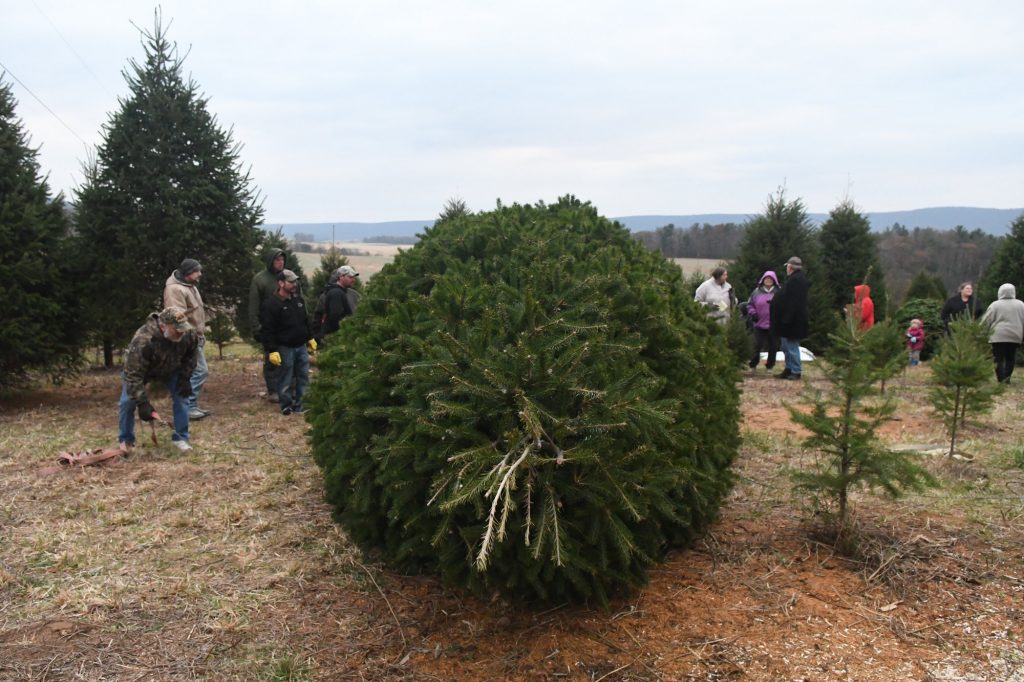 JACQUELINE DORMER / STAFF PHOTOGRAPHER
The Douglas fir tree after it was cut down at Mahantongo Valley Farms in Pitman on Wednesday afternoon. This summer, Larry Snyder won grand champion grower in the National Christmas Tree Association’s tree contest, and the tree will be presented to the White House.

Aaron had the honor of cutting down the tree Wednesday, while about a dozen other people held the evergreen’s interior trunk with a cord tether and guided it as it fell.

Snyder and his crew tested their felling process with two other trees, before attempting to harvest the selected one.

The 16-year-old tree was grown on the Northumberland County side of the Snyders’ farm. It stood at least 22- to 24-feet high and was 12-feet wide at its base. The tree will be cut at the bottom to a height of 18 and 1/2 feet tall, to meet the Blue Room’s display specifications.

Romberger Farm Supply donated a plastic silage cover, so the tree could be wrapped and protected while en route. This morning, Aaron Snyder and Lyle Troutman, will transport the tree on a flatbed truck. It will arrive on the White House grounds later today, where it will be safely stored until Monday, Larry Snyder said. The tree will be loaded onto a horse-drawn carriage before it is presented to the First Lady.

Among those coming out to support the Snyders for the tree-cutting event were John and Debbie Craig, of Elmhurst Township; Kerry Fetter, of McKean County; and Chris Trasatti, of Pitman. Trasatti played the Star Spangled Banner on the harmonica, as men in attendance removed their caps.

John Craig offered a prayer. He was a Mansfield University college roommate of Larry’s and served in Larry and Joanne Snyder’s wedding.

Craig said he hoped the tree would “light up the Blue Room and bring joy” to President Donald Trump and the First Lady, and to all who see it.

A fellow tree grower and seller, Fetter operates Fetter’s Evergreen Farms in Smethport and has been purchasing Snyder’s trees for at least 25 years, he said.