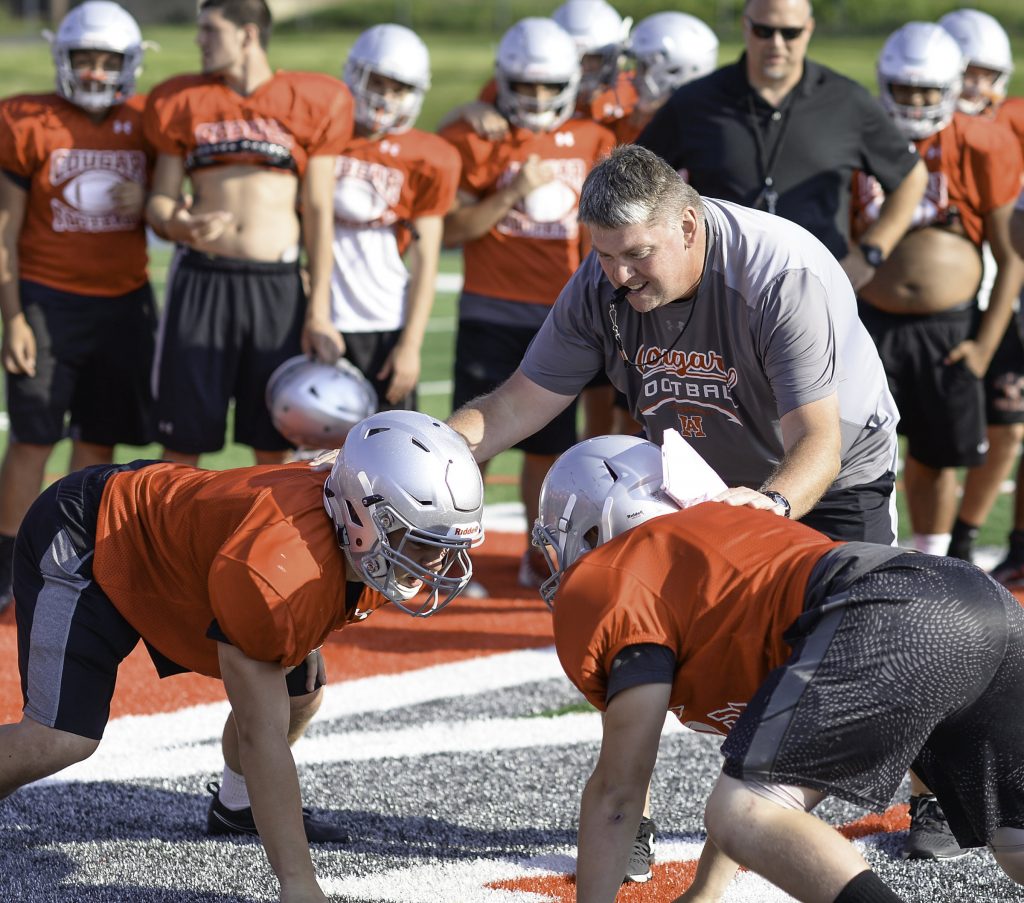 Mike Brennan has always believed his football players and coaches to be family.

That’s what makes his decision to leave the Hazleton Area program that much tougher.

After guiding the Cougar football program for the past six seasons, and helping bring it back to the brink of a championship, Brennan has announced he will step aside as head coach.

Brennan has accepted a teaching and head coaching position at nearby Danville High School, and was officially hired there Wednesday evening.

“I never thought it would happen. Up until a few weeks ago I didn’t think it would,” Brennan said Wednesday. “It’s not a football issue, it’s a family issue. Ultimately they are my primary responsibility in this part of my life.

“Through the good times and the bad times they’ve been with me. It puts my family and my daughters in a good situation. It’s something that I have to do. It’s a difference-maker for me and my family.”

Brennan was hired as the sixth head football coach at Hazleton Area in 2014, taking over after Jim Drumheller resigned following his third season as head coach in 2013.

He took over a program that hadn’t had a winning season since 2009, and in his fourth season Brennan coached the Cougars to a 7-5 record and the first of back-to-back District 2-4 Class 6A championship game appearances.

In six seasons, Brennan’s Cougars went 23-42, with semifinal playoff wins over Williamsport in both 2017 and 2018. They lost to Delaware Valley in both title games.

Five Cougar players earned All-State honors during the 2017 and 2018 campaigns, including Adrian Otero, Ryan “Sparky” Wolk, David Smith, Jacob Hunsinger and Damon Horton, as Hazleton Area football was back on the map.

“The wins don’t match up for how hard those kids worked for us, how much the program has improved,” Brennan said. “The kids played hard every Friday night. In terms of commitment and work ethic, I felt our process was good and we made tremendous progress as a program.”

Hit heavily by graduation and the injury bug, the Cougars fielded an inexperienced team in 2019, finishing 2-8. Yet with several standout freshmen and sophomores playing prominent roles this past season, the future appears bright.

“I talk a lot about family, and the players know how much I put in the program, so I think they’re going to respect my decision,” said Brennan, who planned to address the team today. “I leave here with heavy heart, but I know these kids are going to be successful. They don’t need Mike Brennan to be successful. No one person is bigger than the program. They’re primed to be good in 2020.”

Brennan takes over a Danville team that went 4-7 last season under first-year head coach Brian Raup. Prior to that, the Ironmen reeled off four consecutive winning seasons and playoff berths under then-head coach Jim Keiser. From 2015-18, Danville went 33-15, including four playoff wins.

“There’s a lot of turnover in coaching. To be at one place a long time, you have to be in a unique situation,” Brennan said. “I’m excited. I have 9-to-11 years until I retire. I’m ending my career in a place that has traditionally had success.” 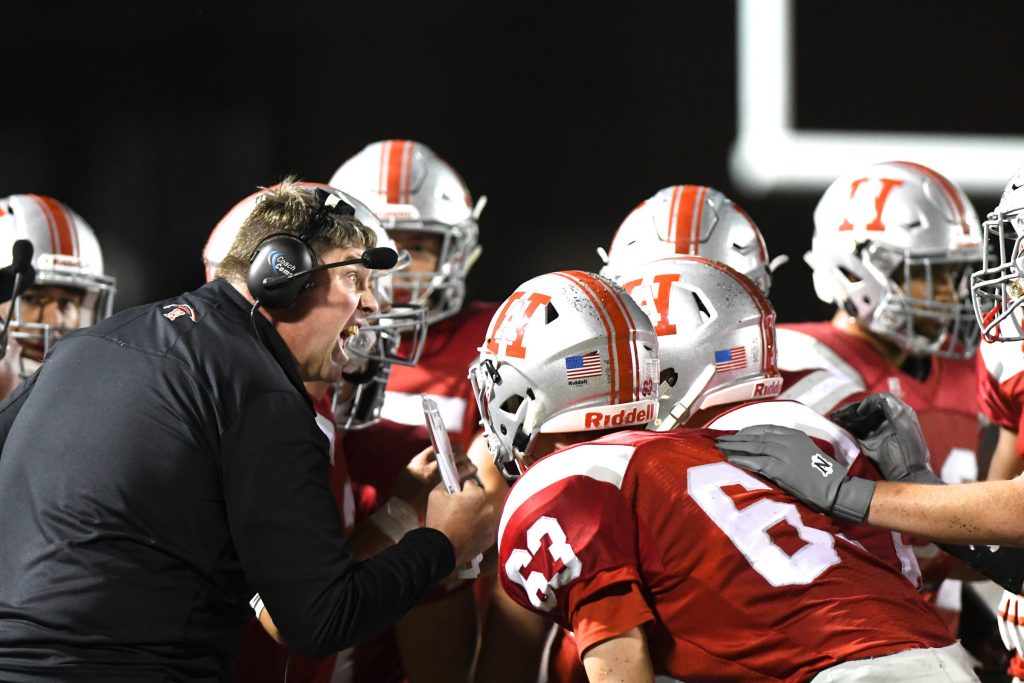 The Ironmen have key skill position players slated to return, including rising senior quarterback Kayden Riley, who threw for 1,865 yards and 19 touchdowns, and rushed for 420 and four scores as a junior. Riley also went 26-for-26 in PAT tries and had two field goals, including a 35-yarder.

Wide receiver Carson Persing (45-761 receiving), wingback Ian Persing (35-479) and running back Jagger Dressler (26-323) combined for 106 receptions and 16 receiving touchdowns, and Dressler rushed for 432 yards and three scores. All three are slated to return, as is linebacker Mason Raup, who amassed 128 tackles and had two interceptions as a freshman. Ian Persing had three interceptions and a pair of fumble recoveries on defense.

“They have a lot of young guys who have played and were very productive, and there’s a lot of hope,” Brennan said. “I hope to put everything together and take a positive step for the program.”

Danville will be the fifth head coaching stop for Brennan, whose career coaching record is 136-104.

A 1988 Nativity graduate who starred as an offensive lineman at Temple University, Brennan went 5-17 in two seasons as head coach at his alma mater before heading to Mount Carmel, where he guided the Red Tornadoes to an 86-24 record and a pair of PIAA Class AA state championship in 2000 and 2002. He later went 22-21 in four seasons at Blue Mountain.

Brennan coached the Pennsylvania All-Stars in the 2012 Big 33 Football Classic. He was also a Big 33 assistant coach in 2006 and an assistant coach for the East squad in the 2005 PSFCA East-West Game.

Through all his success over the past two decades, he said the time spent in Hazleton will be treasured the most.

“The last six years have touched me more than at any time in my coaching career. I’ve built relationships here that will last the rest of my life,” he said. “Everyone has always been so supportive of me and the program. I cherished every day. The players were outstanding, and their work ethic was amazing.”

Brennan had nothing but praise for high school principal and former head coach Rocco Petrone, athletic director Fred Barletta and his staff, the rest of the administration, and for president Rocco Colangelo and the entire Hazleton Area Quarterback Club for their unending support.

“Rocco Petrone is a great leader for the school district. He’s in touch, involved, at every activity. And Freddie Barletta is one of the classiest guys I’ve known, and gave me the opportunity to coach here six years ago. They’ve both supported me,” Brennan said. “I’ll miss Rocco Colangelo and the Quarterback Club, who have been outstanding.”

Saying goodbye to his coaching staff will be particularly difficult for Brennan.

“This was the best staff I have worked with in my coaching career,” he said. “I have a tremendous amount of respect for all our coaches.

“(Assistant coach) Jim Drumheller has been a loyal friend and mentor in Hazleton. He showed me the ropes,” he continued. “Dennis Buchman is the brightest, hardest-working and most talented coach I’ve been around. I love that kid.

“Matt Starrick, Jeff Weed, Rick Painter, who’s been with me since I’ve started. It’s been a lot of fun working with these guys. With some of the Hazleton guys here, the program’s certainly in good hands. They’re going to be OK.”

Although he didn’t bring a championship to the Cougars, Brennan was able to turn the program around and make Hazleton Area football a contender once again.

“It has truly been some of the best times of my coaching career,” Brennan said. “I’m sorry I couldn’t bring back a championship to Hazleton, but I feel like the program’s going in the right direction. I have no regrets leaving, because I know the kids are in position to continue moving forward and succeed.”