Better Than Ezra to perform at Yuengling anniversary party

Schuylkill County has something particularly special to celebrate this July. This year marks Yuengling’s 190th anniversary, and they’re celebrating with a free summer concert by Better Than Ezra. You heard that right. Internationally known American alternative rock band, Better Than Ezra, that performs in places like Philadelphia, Boston, Charleston, Baton Rouge, Baltimore and the like, is giving a free concert right here in Pottsville. This is a very big deal, folks.

Yuengling has a lot to celebrate. One hundred ninety years in business is no easy feat. In spite of the demise of countless breweries throughout the country, regionally and otherwise, Yuengling Brewery not only survives but also prospers as a thriving business, tourist attraction and historic treasure here in our community.

Think about it! The Civil War, two world wars, Prohibition, the influenza epidemic of 1918, the Great Depression, the national demise of regional breweries … on and on it goes. And still Yuengling brews on. The company proudly claims an unmatched record of continuous operation since 1829, and the longest uninterrupted history of management by a single family in our country. It’s tremendous! And factual, I might add.

I can’t help but believe their ongoing success is attributable to the remarkable combination of pride, determination, tradition and innovation evidenced throughout their challenging history.

German brewer David Gottlieb Jüngling (1808–1877) immigrated to the United States in 1828 from Aldingen, a suburb of Stuttgart, in the Kingdom of Württemberg. He Anglicized his surname from Jüngling to Yuengling and began the “Eagle Brewery” on Centre Street in Pottsville in 1829. Lord Chesterfield Ale and Porter are introduced at this time and continue to be brewed to this day.

In 1873, the name is changed to D.G. Yuengling and Son after David’s son, Frederick, joins his father as partner. Years continue to pass, Yuenglings continue to be born and continue to run their family business. In 1919, the 18th Amendment is ratified, and the Yuenglings switch to production of near beer products and construct a dairy across the street in order to survive Prohibition. The 100th anniversary of the brewery in 1929 was marked with only near beer being brewed. (This alone is quite remarkable.) 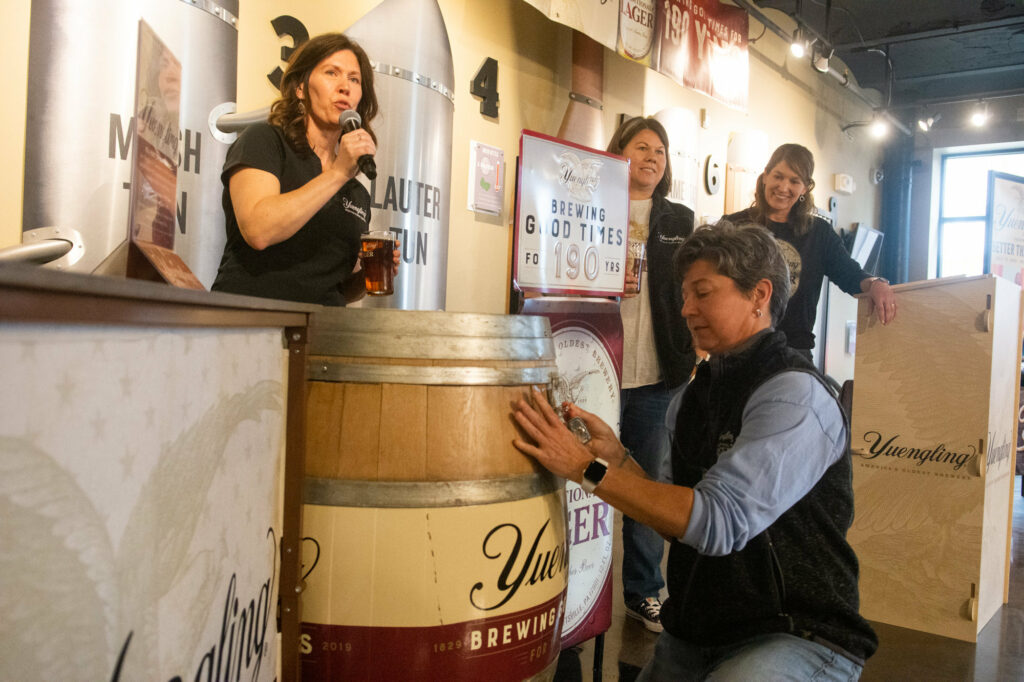 The brewery will survive this 14-year period of America’s “Noble Experiment” and through their determination, tradition and innovation continue on with an aggressive modernization program. Quite extensive, it included a new building for fermentation and storage, a new boiler house, a new brew house, as well as new loading facilities. Time marches on.

A surge in the growth of national breweries and a decline in local markets takes its toll on regional breweries all over the United States, forcing most to close their doors, and Yuengling is no exception (except for the closing their doors part). Richard Yuengling Sr. and F. Dohrman Yuengling hang in there and stay loyal to the family business and tradition which eventually pays off when, in 1985, Richard L. “Dick” Yuengling Jr. buys the company from his father and becomes president.

Dick will embark on yet another impressive modernization program with the company, and in 1987, he makes the decision to reintroduce their traditional amber lager. Over the next five years, the company added Premium Light Beer and Original Black and Tan. These changes, along with others, including new packaging, increased advertising and an exceptional distributor/wholesaler network will catapult the company into production levels that will require three breweries to brew 1.2 million barrels instead of one to brew 126,000 barrels in the short span of 12 years.

In 2012, 24/7 Wall Street named Yuengling Traditional Lager America’s No. 1 Favorite beer. In 2015, Yuengling topped the Brewer’s Association annual list of largest sellers of craft beer. Are you impressed yet? I am. There’s a whole lot more to their success story, but I have to move it along.

The much anticipated 190th celebration will be from 1 to 10 p.m. July 13. There will be two stages, four bands, two beer gardens, with fireworks topping off the night. It will be the perfect event to enjoy awesome music, delicious food and great beer with family and friends. Among the 70 or so street vendors, you’ll find Pappy’s Kettle Corn, Adelphia Seafood, Kowalonek’s, John Hay Cigars, King Cole and Red Shale Ridge wineries, Here Piggy Piggy and Blazing Swine BBQs, Ray’s Porketta, The Rolling Mac a Roni, Skook House of Jerky, and many, many, many more.